Guy is a servant of House Fabre. He was originally hired to be Luke's caretaker, but now he has grown to consider himself best friends with Luke. He feels he is somewhat responsible for how Luke grew up to be spoiled and selfish. He is a swordsman specializing in fast attacks. Although Guy is suave and confesses that he "likes looking at beautiful women", he is deathly afraid of physical contact with women due to a past traumatic event, to the point that he will almost reflexively jump, freeze, or run away in terror. He progressively begins to lose his gynophobia as the plot advances. Near the beginning of the game, Guy is inflicted by Sync's "Cursed Slot" and, a while later, loses control and attacks Luke. Later, Ion explains that a Cursed Slot does not control its victim. Instead, it allows them to lose their inhibitions and act on subconscious feelings. This makes Luke realize that deep down, part of Guy did want to kill him.

It is soon revealed that his anger is actually directed at Asch, the "original" Luke, for being the son of Duke Fabre. Guy is actually of nobility; his real name is revealed to be Gailardia Galan Gardios. Duke Fabre invaded the Gardios house one night years ago and killed his family. All the women of the house, including his sister, Mary, rushed to save the young Guy, but they were slaughtered before his eyes. He awoke to find himself buried in their corpses, triggering his gynophobia. He then infiltrates House Fabre as a servant and vows to himself to hurt the Duke like the Duke had hurt him.

However, Guy's friendship with the current Luke changed his mind and he rejected his ideas for revenge, although he admits to still having some suppressed rage regarding the issue. He also progressively gets over his gynophobia after he uncovers the truth about his trauma. Vandesdelca Musto Fende was part of the Fende household that served the House of Gardios. He was the caretaker of Guy and his sister, Mary, and the three were close friends. After the events of Hod, a vengeful Guy, left with nothing after the massacre of his family and entire household, teams up with Van to get revenge on Duke Fabre. For some reason however, Van decided not to inform Guy about the plan to kidnap Asch.

Guy appears as a tall man with spiky blond hair and green eyes. His default attire has him wearing a white long-sleeved shirt with black buttons worn underneath a brown vest with a large collar at the top and a tail at the back. Most of the collar is differed from the vest in a dark green color. He wears pants that matches the color of the vest's collar, as well as a matching set of leather gloves and boots. Finally, he wears a green band with a metallic ornament attached around his neck. At the epilogue, Guy's attire consisted of a cream and brown jacket, a darker teal green long-sleeved shirt, dark pants, and a different set of leather and boots.

Guy is a kind, hard-working man. He is also somewhat a charmer, and he seems to know exactly what to say, often resulting in women swooning over him, much to his dismay. He always seems to want to help those in trouble, regardless of gender, and even saves Anise from falling to her death during an earthquake, despite his gynophobia. He has an incredibly strong sense of maturity and morality, and a very wide array of knowledge, only exceeded by Jade. Despite his excellent swordsmanship and intelligence however, he is usually portrayed as humble and more respectful of others than of himself. Guy also has an obsession toward fonic technology and fon machines.

Guy fights using the Sigmund Style (シグムント流, Shigumunto-ryuu?), wielding a sword in his right-hand and its sheath in his left, a technique taught to him by Pere. The sword-style in that sense is akin to a Japanese-based swordsmanship, since it involves sheath-drawing strikes and agility-based cuts.

His first mystic arte is Razing Phoenix and the second is Brilliant Overlord and making use of slim swords. The Sigmund Style is described as a quicker, swifter version of the Albert Style, the sword style Luke, Asch, and Van use. Due to the controversy of the Sigmund Style, its techniques and artes are passed along through word of mouth rather than being able to simply research it.

In comparison to the Albert Style, the Sigmund Style hits weaker but faster and more times. Thus, Guy has artes like Sword Rain: Alpha and Tempest. Combined with Guy's naturally high agility and fast regular attack speed, Guy can deal damage very quickly and easily avoid enemy attacks. He also has the arte Center, which allows him to heal himself instantly. In many aspects, Guy acts very similarly to Lloyd Irving in battle, both being fast but weak attackers and good at comboing and also primarily wielding thin single-edged curved blades of an Eastern make.

Guy appears in the arena as the solo cameo battle, fighting against the chosen party member used in the arena. He has access to a basic 3-strike combo, with Kogetsusen, Majinken, Shinkuuhazan, Akisazame, and some of their combinations as his possible attacks, so he will not use any mystic arte in this game. Like all other cameo characters, Guy remains unvoiced in this game. Once Guy is defeated, the player will receive his vest, which allows him to be called into battle through the Support Arte system. When summoned, he will use the arte Akisazame on the enemy. 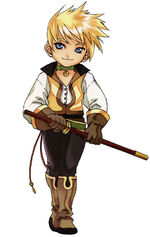 Guy appears as a playable character in Tales of the World: Radiant Mythology 2. Guy is first seen when the Protagonist and the guild on the Van Eltia see his ship is attacked out on sea. Tear with Luke, Guy, and Jade flee into a nearby cave and stay in there until the manage to recover from the attack. After the player gets the story mission to go save him and along with the others. Guy is located on the second level of the dungeon attending to a injured Luke waiting for to Tear to come.

When the player attempts to help the two Guy confuses the player group as a part of the army attacking the earlier and Guy fights the player's party after. After defeating Guy, an injured Luke is prepared to fight the player, but Jade and Tear stop this from happening and explains to Guy that the player is not their enemy. After Tear heals the two, he heads to ship with the others to report to Chat and he is available to called out into the players party after. Later Guy goes with Kanonno Earhart and the player to the giant tower in the sea to awaken Niata and give him a physical form. The sword Guy uses throughout the entire game is his exclusive weapon Jewel of Gardios.

Guy appears as a recruitable character in Tales of the World: Radiant Mythology 3 through Luke's personal quest. He is found in Cardiff Sands at the Afterlife area during the main mission of Colette Brunel and Kohaku Hearts. Like in the main game, Guy's gynophobia is present in some of the skits he appeared in.

In Tales of the Heroes: Twin Brave, Guy is the protagonist of a serious scenario with Luke being his partner. He is again a servant in Duke Fabre's manor as well as Luke's best friend in this story. One day, Luke claims that he has heard a voice in his head telling him that he will become a hero to save the world by using the Eternal Sword, and leaves the manor to find the said sword. Feeling doubtful about the whole thing, Guy tries to stop Luke from activating the sword but fails. As a result, thousands of people lose their lives due to the power of the sword, which is exactly what was intended by the owner of the voice, Elrane. Luke flees from what he has done, leaving Guy alone for two chapters.

On his way to find Luke, Guy encounters several Tales characters who come for revenge against Luke, or otherwise intend to arrest him. He fights his way through nevertheless, insisting that he must find Luke and have him understand the gravity of the crime he has committed. In the meantime, however, Guy hears Elrane's voice in his own head, too. Elrane tells him that she wants him to obtain the sword instead, to allow it to take more lives. She reminds him that he is supposed to take revenge on the Fabre family, for it was Duke Fabre who had slaughtered his own family. She attempts to lure Guy into accepting her request by saying that he will get his dead family back by doing so.

Though swayed by Elrane's words, Guy eventually refuses her and discovers Luke soon afterward. He confesses to Luke that he had originally come to Duke Fabre's manor to take revenge on the Fabre family, but he already changed his mind, for it was Luke who taught him to live on. He claims that Luke is the reason that he is alive now, and he promises to accompany Luke in his upcoming life to pay for his crime. Then he and Luke defeat Elrane and destroy the Eternal Sword together. Guy also appears in Luke's comical scenario as his partner. His main role is to help Luke out of all kinds of troubles he finds himself in, putting him in conflict with other Tales characters. When Guy appears as a boss in other stories, he still acts as the protector of Luke in most cases. Other characters feel that he is spoiling Luke too much.