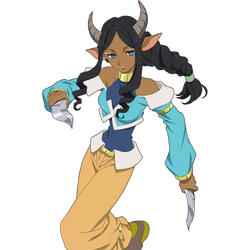 Halfs (ハーフ?) are a race in Tales of Rebirth. Often considered anomalies due to their rarity, Halfs are scarcely mentioned or acknowledged.

Halfs are the results crossbreeding between Huma and Gajuma. Due to the taboo standing of interracial relationships in the story, Halfs are an extreme rarity, with nearly all of the members of the story's protagonists having never seen one prior to meeting Hilda Rhambling. Halfs bear a mostly Huma appearance, featuring Gajuma characteristics such as horns, animalistic ears, and tails, which Eugene Gallardo mentions that all Halfs have. Throughout the entirety of the story, only two Halfs, Hilda and Militsa, are seen, both of whom are referred to as miracles due to the fact that Halfs have extraordinarily difficult births and are highly prone to illness.

When Hilda was a baby and very sickly, her parents took her to Gilione's shrine in hopes of saving her, which was successful. Despite Halfs' frail bodies, Halfs are considered to possess incredible power, most of which derives from their horns. When Hilda broke off her horns prior to the events of the story, she forfeited some of her power as a result. Halfs are easily discriminated against from both sides, primarily due to their rarity and unusual appearance. Hilda struggles with her race due to the torment she received as a child, as well as the rejection she feels from believing to have been abandoned as a baby by her parents. After breaking off her horns, Hilda covers them and her animal-like ears with a hat in an attempt to blend in society as a Huma.

Alternatively, Militsa embraces her race, freely exposing her horns and animal-like ears, as well as reprimanding those who deem her appearance unusual. Both Hilda and Militsa joined the King's Shield after being promised a new body by Tohma prior to the events of the story. When it is revealed that Tohma deceived them, Hilda leaves the King's Shield, but Militsa remains, having been promoted to the Four Stars and believing the King's Shield to be the only place where Halfs can be accepted. It is not until after the events of the story that Militsa learns to find a place where she can be accepted outside the King's Shield, and Hilda eventually comes to terms with her existence as a person instead of a Half, removing her hat during the story's final scene.