Harold Berselius (ハロルド・ベルセリオス, Harorudo Beruseriosu?, "Harold Belserius") is a protagonist and the creator of the Swordians in Tales of Destiny 2. Due to her name and accomplishments, she is often believed to be a man, but this does not bother her in the least. She was a major character during the Aeth'er Wars, as she turned the tides of the fight by developing powerful Lens-based swords called Swordians.

After meeting Kyle Dunamis and his companions by chance, the group is astounded to discover that Harold is the Harold Berselius, the creator of the Swordians, as everyone assumed the famous historical figure was a man rather than a woman. Harold claims to have intentionally used a man's name to "fool historians", acknowledging that her birth name is different. Due to the distorted timeline in which she lives, Barbatos Goetia, who should have been dead, is alive and disrupting the plans of the Radisrol team to attack Dycroft, thus without Kyle and the other's intervention. This series of events would have instead led to the war being won by Dycroft, with Barbatos being written in history as a hero. Not at all surprised that Kyle and his companions are from the future, Harold recruits them in assisting her with the preparations of Radrisol's historically significant attack on Dycroft.

When Barbatos kidnaps Atwight Eks, Harold prepares herself to develop the Swordians. Before doing so, however, she fuels within Kyle a desire to rescue Atwight by telling him that she is Dymlos Timber's lover. Kyle and the others decide to venture to Spiral Cave, where they fall into a trap set by Barbatos. Despite the perilous situation, Dymlos arrives with his Swordian Harold gave him, defeating Barbatos and saving everyone, including Atwight. Harold reveals herself shortly afterward, reinforcing the notion that she had things planned from the beginning.

Prior to the final attack on Dycroft, Judas informs Kyle that the death of Harold's twin brother, Karell Berselius, is written in history, but they should not intervene with its occurrence as to avoid distorting history more than it had already been. The group agrees not to tell Harold, but when the group encounters Barbatos, he informs Harold of her brother's destined fate, though this fails to deter her. As history dictates, Karell dies during the final confrontation with Miktran, and Harold, despite already knowing this fate, nonetheless rushes to her brother's aid and weeps after his death. After these events, Harold decides to join Kyle's team in traveling through time to in order to stop Barbatos and ultimately the goddess Fortuna for the sake of restoring the proper flow of her time.

Harold's appearance is fitting of her colorful personality. She has magenta-colored hair with a sparkling substance scattered throughout and violet eyes. Her attire consists of an aqua-blue corset partially covering a turquoise jacket with black, dramatically-frilled ends. She wears gold earrings and a large violet skirt with two tails of a darker hue extending to the ground. Beneath this skirt, she wears a pair of hot pink shorts that are buckled to matching high-heeled boots that extend to her thighs.

Harold is a wacky scientist and eccentric genius. She thinks of everything in terms of her research and is all but helpless in non-academic affairs. These qualities makes her seem childish and unpredictable, but she also proves to be highly perceptive on matters of a serious nature, such as when she influences Kyle and the others to rescue Atwight, knowing things will resolve the way in which they are meant to. She is obsessed with her research to the point that she would add paralyzing pills in food for the sake of having a body with which to experiment, even if the host is an ally. She is highly intelligent and is often the first to realize what is happening in obscure situations, as well as what the enemy forces may have planned. She tends to joke a lot with Loni Dunamis and Judas, the latter of whom can never win a dispute against Harold.

Harold is an offense-oriented magic user who equips rods in her main hand and daggers in her off-hand. Due to her superior intelligence, she is the most powerful spellcaster in the game, while being significantly less potent in close-ranged combat. She can cast the healing spells Cure and Resurrection, but she is unable to resurrect allies like Reala since she lacks the Raise Dead spell. One of her abilities allows her to automatically identify a new enemy, identical in function to a "Magic Lens" item.

In Tales of the World: Radiant Mythology, Harold is a scientist in Gavada but has disappeared because she opposed Aurora. The Protagonist and Mormo eventually find her in the Aelderwood, where she is unconscious. However, she awakens and steals Mormo's sandwich; this is how the rivalry between Mormo and her begins. The comical skirmish becomes even further hilarious in skits while the Protagonist walks through Gavada throughout the rest of the game.

Harold makes a return in Tales of the World: Radiant Mythology 2 as a playable character. Harold is first met when the Protagonist, along with Kyle, Reala, and Nanaly Fletcher, journey to Lava Cavern. When they find Harold, she is conducting research and collecting samples. Harold informs them she found all the things she needed and accompanies them on the Van Eltia, taking current residence on the ship. Harold is always seen talking to Raine Sage, Philia Felice, and Jade Curtiss inside the laboratory of the ship. In some scenes later in the game, she is seen talking Shoh Corron, but somehow ends up insulting him.

Harold returns in Tales of the World: Radiant Mythology 3 as a playable character. She joins Ad Libitum along with Nanaly early in the story.

Harold appears in Tales of VS. as a playable character. During the events of the game, she is paired with Nanaly and researches the Swordians for the kingdom of Nidhogg. She can be unlocked by completing side-events during the Yuri Lowell and Farah Oersted story and the Mao and Caius Qualls story. Her capabilities are essentially the same as in her original appearance, albeit her mystic arte no longer involves summoning abilities, but rather the full Crazy Comet extension chain.

In Tales of the Rays, Harold is in the "employ" of Asgard Empire where she helps with the Living Doll research due to her Swordian research in her home world. While she appears to work with the Empire, in reality she does her own independent work and works with Mileena Weiss's group in order to stop Demitrius's ambitions. 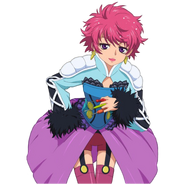 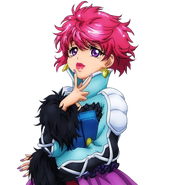 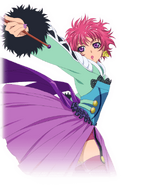