Hermana Larmo (エルマーナ・ラルモ, Erumana Rarumo?) is one of the protagonists in Tales of Innocence. She is a young girl who became an orphan due to the ongoing world war, one of the many street children that now roam the streets of Regnum. She is the reincarnation of the dragon goddess Vritra.

Hermana's fighting style is based on the Fighter class from the Radiant Mythology series of games. Her artes include a variety of kicks and punches to handle the enemy. She also possesses spells from each element, as well as the classic Pow Hammer and Pow Pow Hammer. Hermana's mystic arte is Seiryuu Houtenretsu, in which she turns into Vritra and flies toward the sky before crashing, delivering heavy damage. 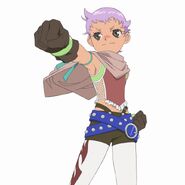 Cut-in image for Ryuuga Tenketsusen in Tales of Innocence R.

Cut-in image for Seiryuu Houtenretsu in Tales of Innocence R.