Hisui Hearts (ヒスイ・ハーツ, Hisui Haatsu?) is a protagonist from Tales of Hearts. He is the older brother of Kohaku Hearts.

At the beginning of the story, Hisui is being chased by Incarose along with Kohaku. They jump off a cliff and end up in the beach of Kor Meteor's hometown. Here, he mistakes Kor for being a pervert who tries to forcefully kiss Kohaku, when he just tried to save her, and hurts him. He develops a strong friendship with Kor and Kunzite later in the story, and eventually develops a friendship with Lithia Spodumene, which later on becomes very deep feelings toward her.

When Hisui was young he lost a relative, which caused him to develop a strong sense to excessively try to protect his younger sister. He has a rough outward appearance and acts cool, but inside he has a stubborn heart and is hot-headed. He is also very socially awkward, as pointed out by Kunzite and Lithia.

Hisui's weapon is the Soma Gale Arc (ゲイルアーク, Geiruaaku?), which he obtains from Ines Lorenzen early in the story. This weapon does not change throughout the story, but upon evolving his Soma, it will become stronger. Upon reaching the final stage of evolution, that will be considered his ultimate weapon. Hisui fights using his Soma, which functions as two automated crossbows mounted on each wrist. He fights using several attacks that resemble gunshots. He is also an adept healer and a prominent user of Wind and Water magic.

Cut-in image for Golden Eagle in Tales of Hearts R. 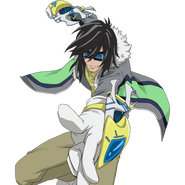 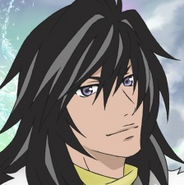