Illia Animi (イリア・アニーミ, Iria Aniimi?, "Iria Animi") is the main female protagonist of Tales of Innocence. She ran away from her village because she was being chased by a mysterious group. Illia has some sort of strange animal with her named Coda. She is the reincarnation of Inanna.

After Ruca Milda loses a football game, his friends order him to buy them hot dogs. While Ruca is walking with the hot dogs, he bumps into Illia, who is dying of hunger, along with Coda. Illia asks for the hot dogs and introduces herself, then two mysterious men appear, prompting her to flee with Ruca behind her. They are cornered, and Illia points her weapons at them. When she is caught, Ruca attempts to help her, and after he awakens Asura's power, they escape the city. However, after a brief meeting with Mathias, they are captured and forced to enter the holy city of Naohs. After Ruca and Spada Belforma talk, there is a skit in which the two introduce themselves. In the skit, the two make plans to tease Ruca since he is so timid. Later, when they go to the Western Battlefield, a prisoner named Thitose Cxarma appears and kisses Ruca, which sends Illia into a cursing anger.

Impulsive and quick-tempered, Illia has a personality where she is honest with herself and has a strong sense of justice. She has a habit of teasing Ruca, but she says that it is because of his timid nature and that she does not hate him.

Illia wields two pistols in battle, with one held in each hand. She explains her weapon choice in a skit, claiming that her family uses only one, but she uses two because "it's cooler". Illia acts as a supportive healer and ranged attacker, who uses her long-ranged abilities to keep enemies away. She is capable of casting Water-elemental spells in addition to her healing and support magic. Illia's basic hit combo deals six hits by default, without the use of additional passive skills to provide more hits. Each of these hits deals full damage, making her one of the most damaging characters in the game due to her fast-trigger speed, drastically increasing her damage output per second compared to other characters. However, she is very likely to miss the target completely if it starts moving to the side due to the very linear attack spread of many of her attacks.

Despite her effectiveness with physical attacks, Illia is the least effective character in aerial combat. Many of her artes are likely to miss an airborne target unless it is already being held in the air with another character's attacks. However, some of her air-based attacks can affect a large area of the battlefield, sometimes able to hit multiple grounded enemies with one attack. She does have access to some melee abilities, but they are optimized for grounded combat.

Illia appears in Tales of the World: Radiant Mythology 2 as a playable character, along with fellow Innocence characters Ruca and Spada. She and Ruca are seen at the very beginning of the game since they are residents on the Van Eltia. She becomes available as playable character after the player completes the third mission of the game.

Illia appears in Tales of Crestoria during the Limited Quest "Panic! Library Ruckus". Growing up poor, Illia didn't have proper education, so she made up her mind to build a school for poor people. Ruca Milda decides to help her out. While Illia is travelling worldwide to raise money, Ruca is tasked to find suitable sites for the school. 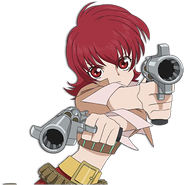