Aselia Wiki
Register
Don't have an account?
Sign In
Advertisement
in: Ion, Tales of the Abyss characters, Supporting Characters
English

View source
watch 02:56
Raise a Floppa - The Loop
Do you like this video?
Play Sound
This article is about the character Ion. For other uses, see Ion (disambiguation).

Fon Master Ion (導師イオン, Doushi Ion?), or simply Ion (イオン, Ion?), is the highest leader in the Order of Lorelei, a neutral theocracy currently trying to calm the power struggle between the kingdom of Kimlasca and Malkuth Empire in Tales of the Abyss. He is the only one who can read the Planetary Score and unlock Yulia Jue's seals.

Ion first joins the party in the Cheagle Woods, and from there, continues to accompany them throughout the story. Although he is often seen in conversations and skits with the group, he never fights, presumably due to his weak condition. When Luke fon Fabre and Tear Grants encounter him in the forest, he nearly faints due to overexerting his powers. Throughout the story, he is constantly pursued by the God-Generals in order to break the "Daathic Seals" on the Sephiroth Trees.

It is later revealed that Ion is the seventh replica of the original Fon Master. He was created along with six others and chosen because his abilities were closest to the original's two years before the story. The remaining replicas were thrown alive into the Mt. Zaleho volcano, notably the God-General Sync. The original Fon Master was ill, so Grand Maestro Mohs and Van Grants created the replicas; the original later died. One month after Van's initial defeat at the Absorption Gate, Ion is taken by Mohs to read the Planetary Score. However, the strain on his body is too great, and he dies. Before his death, he absorbs the miasma inside Tear's body, saving her life.

Ion is optimistic and soft-spoken, tending to point out the positive aspects of a person's character, even if their negative qualities are overwhelming. Despite being physically weak and docile, he attempts to use his leadership to lead the world to peace, and exhibits great maturity. He refuses to be a puppet, and creates a separate faction to oppose the strictly traditional Mohs, the second in command of the Order. Unlike Mohs, Ion views the Score as one possible future out of many.

Tales of the Rays marks the first time in the series' history where Ion is a playable character. He fights using staff that has an amplified-by-magic reach, but he also incorporates his hands and legs. Because of his still weak condition, Ion has the lowest maximum HP in the game, a low CC recovery speed, and will faint if he runs out of it, though these downsides are offset by low CC costs to his artes. While he is temporarily drained out, he cannot attack, use artes, including mirrage artes, or perform any other action, leaving him in a very vulnerable state. On the upside, he will automatically evade enemy attacks during his own arte execution, and most of his artes can trigger altered artes that can reach foes in mid range. 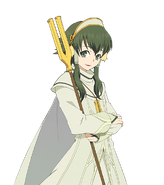 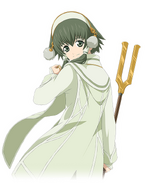