Ivar (イバル, Ibaru?) is a minor antagonist in Tales of Xillia and Tales of Xillia 2. In Tales of Xillia, he is a devoted disciple of Milla Maxwell known as a "handmaid" (巫子?). A year later, during the events of Tales of Xillia 2, Ivar joins the Spirius Corporation after Milla becomes the new Maxwell. He also possesses a unique ability to converse with monsters and animals.

Ivar was born four years after Milla came to the world and was chosen to serve as her handmaid, a task that is exclusive to this tribe. Over the years, Ivar's pride of being Milla's disciple grew, resulting in his obsession and over-protection of her. After Milla returns to Nia Khera with Jude Mathis at her side, Ivar encounters them in Milla's Shrine, where the two are attempting to summon the Four Great Spirits to no avail. Ivar instantly blames Jude for Milla's loss of the summoning.

His desire to outshine Jude would be used by Alvin later on in aiding Ghiliad's plan to destroy the schism separating the two worlds.

In both games, Ivar has white hair tied into a ponytail, long bangs, and olive green eyes. In Tales of Xillia, Ivar wears a deep blue-feathered collar; a tight black undersuit; and a white vest with red lining and silver patterns that extends to his legs, giving the appearance of shorts. He wears red shoes and separated white sleeves with the same red lining and silver patterns as his vest. In Tales of Xillia 2, due to his change of home and work, Ivar changes his handmaid outfit into a more modern agent suit, with some features similar to his previous attire. He wears a white shirt girded with large red material, a black bow tie made a string around his neck, and a belt. He also wears a black rib-length jacket with gold patterns and sleeves that end between his wrists and elbows. Black, finger-less gloves complete his attire, although he sometimes wear dark sunglasses.

Personality-wise, Ivar is very headstrong and competitive and also naive. His single desire in life until he met Jude was to be the best handmaid for Maxwell. When this did not go well, he became more determined to prove himself to be better than Jude, even defying Milla's commands and shirking his other responsibilities. Even when he indirectly aided Exodus with their plans, he seems to only care about being better than Jude and even goes so far as to join Gaius and become Jiao's replacement.

Ivar fights using two daggers, holding them in reverse grip. His battle style mainly involves attacking multiple times, artes that launch the enemy into the air, and abilities that involve impacting the ground and creating shock waves to damage the enemy. One particular arte he possesses is Crushing Eagle, which causes him to land heavily on the ground and initiate his mystic arte, Shimmerfang Impact, which creates a large glyph that damages the enemy.

Cut-in image for Shimmerfang Impact in Tales of Xillia 2. 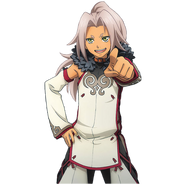 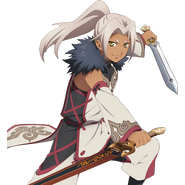