Eighteen years after they died, Leon and Chaltier are brought back to life by a woman named Elrane. She asked for their help to rewrite the history of the world. However, Leon refused and was banished back to the world. He wandered throughout the world alone. As time passed, Stahn Aileron's tale became a legend and Leon's name was also marked in history, although as a traitor. For this, he donned a skull mask made from a dragon cranium, known for its defensive abilities against attacks and spells, to hide his identity. He also changed his fighting style. Originally wielding only one sword, Chaltier, in his right hand and a shield in the other, he now wields another sword in his other hand.

Leon later ends up in the prison of Darilsheid, where he eventually meets his nephew, Stahn and Rutee's son, Kyle Dunamis, and his friend, Loni Dunamis, when they share the same prison. After hearing how Kyle wants to be a hero, Leon appears and lectures him about what it takes to be a hero. He eventually frees them both, but claims that he does not have a name, so Kyle is free to name him whatever he wants. He is given the new name "Judas". After helping them escape the prison, he leaves them and wanders some more. He later reappears in Straylize Temple and saves Kyle and Philia Felice from Barbatos Goetia. Kyle asks him to join him in his quest to find the true meaning of being a hero. He agrees, and along with a young girl named Reala, he accompanies Kyle and Loni in their quest.

Their quest leads them to be transported through time to the future, where the world is not as peaceful as Kyle hoped it to be. Judas and Loni are separated from Kyle and Reala, and end up in Hope Town. They stay and befriend a woman excelling in archery, named Nanaly Fletcher. During their stay, Judas and Loni often mention Kyle and Reala, and when Nanaly leaves Hope Town for Aigrette, she returns bringing Kyle and Reala back. Judas rejoins the group, and they eventually make it back to the present time after a shocking revelation of Reala's identity. On the way, Nanaly is also dragged to their time, so she joins them as well.

Eventually, they discover Elrane's intention, though Judas knew it all along, choosing to keep silent about it. Kyle's group confronts her in a parallel world where she is hailed as a savior. It is there Elrane reveals to Kyle's group about Judas's identity: he is Leon Magnus, the traitor of the five heroes: Stahn, Rutee, Philia, Garr, and Leon. Judas confirms the revelation, and later the group, except Reala, is sent to a dream world, which revolves around the past and how it would seem to make them happy. However, Reala intervenes and manages to snap Kyle, Loni, and Nanaly back to their senses and reality.

In Judas's dream world, he is taken back to the time when Elrane revived him. He remembers how he betrayed Stahn and the other heroes and eventually died. She asks him to side with her, but Judas keeps refusing. Kyle's group eventually intervenes. Elrane is enraged and asks if Kyle would accept a traitor like Leon. However, Loni and Nanaly declare that the group does not know the traitor known as Leon Magnus, but instead is helping their friend, Judas. Eventually, the group learns that history was changed by Elrane, so Reala transports the group, including Judas, to the past timeline to undo Elrane's changes.

While attempting to prevent Elrane's intervention within the timeline, the group has to work with the Earth generals that will become Swordians in the future, Dymlos, Atwight, Chaltier, Clemente, Igtenos, and Karell Berselius. They are also joined with Karell's supposed twin brother, who turns out to be his twin sister, Harold Berselius. They are later transported to Dycroft, during the time when Stahn defeated Kronos. Stahn and the others plunged their Swordians into the Eye of Atamoni to stop it, but their powers are not enough. Judas is about to stab his Swordian into the Eye when the group is confronted by Barbatos for one last time. Upon his defeat, Barbatos throws himself to the Eye of Atamoni, killing himself.

With Barbatos's death, Judas is free to give his final words to Chaltier before eventually stabbing him into the Eye, destroying Aethersphere. The group returns to the present time right after that event and confronts Elrane in the "Egg of God". They fight and defeat her, only to revive Fortuna from her egg. The group defeats her and, due to her defeat, history will be rewritten as if Elrane never existed, so the group can start anew to prevent the already bleak future. As Judas is about to disappear, he wonders whether he will be rejected in time or still die under the name "Leon Magnus". However, one thing for sure, he will never forget Kyle and their bond. Thus, Judas vanishes.

Judas is identical in appearance to his former self, being the same age as when he died despite the 18 years that have since passed. However, he now dons a black, full-body suit bearing a cross-like design on its torso, a stylization that continues down his arms and left leg. He wields two swords in battle, the second replacing his shield, and keeps Chaltier hidden as to further conceal his identity, a skull mask crafted from a dragon's cranium serving as the primary method for this. He also wears a purple cape that compliments the subtle accents of his attire.

In contrast to his former personality, Judas now harbors a deep sense of doubt of his renewed purpose, and he often questions his worth, being able to live again when so many who died during the world's second Belcrant crisis cannot. He deeply regrets his past and the mistakes he made, blaming himself for much of the misfortune caused by Oberon Corporation and its wayward executives. With his rejection of Elrane's proposal, Judas is doomed to wander the world alone and conceal his identity to dissociate himself with his traitorous past, an event that has cursed him in history books ever since.

Although his shame and the aimlessness of his resurrected life plague him, he finds a form of atonement in looking after Kyle during his journey. The boy's optimism reminds him of that of Stahn's, a mindless cheerfulness that once irritated him to no end now offering a nostalgic sense of comfort. With his extensive knowledge of the past and the world's turmoils, he guides the group with the information that enables them to better grasp the gravity of their situation and roles in setting history back on track. Before Judas disappears at the end of the story due to the world's true timeline being restored, he still holds his doubts of being able to die without regret or if his betrayal will forever mirror his existence in history. Nonetheless, he etches the memory of Kyle in his soul, which offers some certainty.

Judas appears as a nexus captured during Phantom's experiments with exoflecting the same person from different points in time. The masked boy eventually manages to escape with his cellmate, Kongwai Tao, and they later take refuge in a town where Kyle, Reala, and other nexuses happen to be helping prepare for its Halloween festival. After learning that the past versions of Stahn, Rutee, and himself are also here, Judas tries to depart on his own, knowing Kyle is safe, but then he quickly gets dragged into the festival preparations as well. Not wanting Kyle to be disappointed by his first Halloween, Judas works behind the scenes to organize a scavenger hunt, but is soon discovered by the boy after it begins. Kyle insists on not being able to enjoy the festival or his new life in Tir Na Nog without him, so Judas indulges in his nephew's wishes.

Unlike their previous crossover appearances together, Leon almost immediately deduces Judas's true identity and confirms it with him, but decides to not press further about the details unless necessary. Judas returns the sentiment, and for anyone not aware of their relationship, he identifies himself as Leon's distant relative. Although both do not regret the choices they have made, Judas urges his past self to cherish what he managed to obtain in Tir Na Nog: his friends and Marian Fustel.

Since he prefers keeping his identity a secret, Judas tends to refrain from being around his counterpart, but that does not stop him from performing the same duties if the other is not around. He later becomes one of the party's representatives for the Phandaria region, alongside Karyl Sheeden. 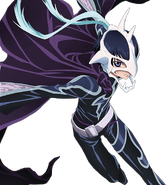