Judith (ジュディス, Judisu?) is one of the protagonists in Tales of Vesperia. She is a member of the Kritya tribe, a minority race.

Judith was born and raised in Temza, a Krityan village located on Mt. Temza, where her father Hermes was a genius blastia researcher working for the Empire. As a girl, she befriended Ba'ul, a young Entelexeia that lived at Mt. Temza's peak. Together with Judith's father, the trio traveled often. However, when Judith was nine, she was caught in the crossfire of the Great War as it erupted near Temza, destroying the village and resulting in the deaths of her parents. She was rescued and taken to the Krityan city of Myorzo, but traumatized by the events she had witnessed, she withdrew from others and suffered from insomnia.

Exacerbating this was the fact that she was not able to adapt to the radically different culture of her new home, and she quickly became restless. Judith was accustomed to fighting, which was unusual for the docile Kritya. She eventually made an oath on her "Brionic" spear that she and Ba'ul would traverse the world together, destroying Hermes blastia, which her father invented, realizing the dangers it caused. She relied on Ba'ul's natural ability as an Entelexeia to sense disturbances in aer and find the destructive Hermes blastia. It was at this point that she left Myorzo and began her journey prior to the events of the story. Due to the armor she donned and creature she rode, Judith became recognized as the "Dragon Rider" to those who witnessed her.

Judith first meets the party at Capua Nor in her "Dragon Rider" armor, where she bursts into Ragou's mansion to destroy the Hermes blastia that is controlling the weather of the Nor Harbor region. The second time the party encounters her is at Caer Bocram, where the Hunting Blades are using a Hermes blastia to create a reverse barrier, trapping the Entelexeia Gusios. Judith destroys the blastia and frees Gusios, and the group is forced into the battle with the Entelexeia. She later appears to the group while they are resting in Heliord. However, she does not attack them, instead departing as quickly as she came.

It is later revealed that the disturbance in aer that Ba'ul sensed was caused by Estelle and her abilities as a Child of the Full Moon. Upon discovering that Estelle is a human and not a blastia, Judith hesitated and decided to monitor her before coming to a conclusion on which course of action she should take. The group's last meeting with Judith as the "Dragon Rider" is at Dahngrest, where she arrives to destroy Barbos's weapon, another Hermes blastia, but the rogue guild leader escapes to his tower fortress in the desert, Ghasfarost. Yuri Lowell hitches a ride with Judith on Ba'ul in their pursuit of Barbos. At Ghasfarost, Judith is forced off Ba'ul and thrown into a prison cell with Yuri. Working in tandem, the two devise a plan to escape the cell and continue pursuing Barbos. Once Barbos is defeated, Judith departs from the group temporarily.

Judith soon rejoins the group at Dahngrest while they are fleeing from the rampaging Entelexeia, Phaeroh. She silently negotiates with him, convincing him to break from his hostilities toward Estelle, whom he was targeting in his assault, naming her an "insipid poison" to the world. In exchange, Judith promised she would observe Estelle herself, and if she judged the girl to be too great a danger, she would kill her. As the group flees the city, Judith joins Karol Capel's newly-formed guild, Brave Vesperia, out of curiosity, as well as to observe Estelle in a safe perspective.

Judith proves to be very critical of Estelle initially, accusing her of expecting Brave Vesperia to follow every random whim she conceives. Throughout the group's journey, Judith undertakes several undercover missions, destroying Hermes blastia in areas where the flux in aer is altering the local environment. The group eventually travels to the Desier continent in search of Phaeroh to discover the true meaning behind his words to Estelle. Judith, who knows the location of Phaeroh's home, withholds her knowledge from the rest of the group, dropping hints subtly. Ultimately, the group is unable to find Phaeroh in time before being forced to return to Nordopolica by the new moon and meet the Duce, Belius.

Up until this point, no one other than Yuri is aware of Judith's true identity as the "Dragon Rider". After the death of Belius, the group flees Nordopolica on the Fiertia, which is equipped with a Hermes blastia engine. Judith immediately destroys the blastia without any attempt to conceal her identity, then flees the ship on Ba'ul, claiming this action to be the path she has chosen. Not long afterward in the story, the group searches for Judith at Mt. Temza, where she is defending herself from the Hunting Blades to prevent them from killing Ba'ul as he evolves. There, she reveals to Brave Vesperia her reasons for destroying blastia. The group assists her in fighting Tison and Nan of the Hunting Blades before observing Ba'ul evolve into a mature Entelexeia. Judith later reflects on her decisions and alters her stance on destroying blastia, placing more faith in the humans who utilize it, notably Estelle and Brave Vesperia. She attempts to convince Phaeroh the very same.

As a Krytian, Judith has pointy ears, blue hair, and two long antennae. Her default attire consists of blue and white, short pieces, revealing much of her skin.

As the Dragon Rider, Judith's attire consists of white armor with some purple, red, and brown details. She also wears a tall helmet and white cape with this attire. A variant of this outfit with dark blue boots is worn whenever she has the title Guardian of the Truth equipped.

Judith is one of the more mysterious, mature, and rational members of the group. She is gentle-looking, perceptive, composed, receptive, and often acts without explaining her actions, frequently failing to gain an impression of the current situation. She is also decisive, persistent, witty, somewhat impulsive, and quite bold, preferring to wear revealing outfits. Judith is also very flirtatious and enjoys teasing the male members of the group, often making suggestive comments about "showing a little more" of her already impressive figure. Estelle has humorously shown to be jealous of Judith's physique and power over men she possesses. Judith has stated she is "not a very good liar", and this fact is evident in several conversations. She also enjoys fighting a great deal and becomes excited at the prospect of a battle, almost to an extent that it unnerves other members of the group, and she is disappointed when unable to fight. Judith is also shown to be somewhat fastidious as she states she must shower at least once a day.

Judith fights with long weapons, primarily spears and staves, granting her a safe distance from enemies despite conducting artes in a close-ranged style. In addition to this, Judith focuses on aerial-based techniques, often attacking with her legs as well, and she is capable of performing multiple-hit combos on her target while airborne. Being the fastest of all playable characters in the game, Judith is able to swiftly approach and strike enemies numerous times before the enemy is able to properly respond. All of Judith's artes are physical-based and possess a lunar theme, frequently containing references to the moon. Despite lacking any magical-based artes, she can use the flexible Moonbeam from anywhere on the field, appearing above her target to attack and vanishing before the target has an opportunity to retaliate.

Judith appears in Tales of VS. as a freelance warrior from the Free City Union of Dyne. She is currently merely going along with her employer's ideas, but it seems she has no other goals in mind. She usually flies around in the world of Dailantia with her partner, Ba'ul.

Judith arrives in Van Eltia alongside Raven in order to work with Ad Libitum after Yuri becomes available as a team member. In a story mission, Judith, the Protagonist, and Keele Zeibel travel to Veratoropa to investigate the creation of the world. Due to her race and ability to read ancient letters, Judith translates the murals found during the mission. She is one of very few members in Ad Libitum who often speaks with Niata, the other members being Kanonno Grassvalley and Rita. In another side-event, she accompanies the Protagonist to gain their "Radiant" weapons. 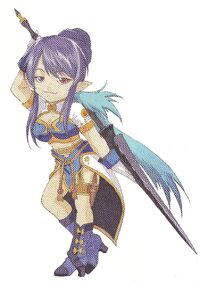