Karol Capel (カロル・カペル, Karoru Kaperu?) is a young boy who wields a giant hammer and various other large weapons. Having grown up in Dahngrest, the home to many of the world's guilds, Karol knows a lot about the functioning and culture of guilds. Despite the fact that he acts with a lot of bravado, Karol lacks self-confidence, which leaves him rather cowardly in terms of actions. Due to this cowardice, Karol is repeatedly mocked in Dahngrest for joining and being kicked out of many different guilds.

Karol meets Yuri Lowell, Estelle, and Repede at the end of Quoi Woods, where he mistakes the party for a monster and attacks. His fear causes him to swing uselessly around, allowing Yuri to stop his wild spin as well as breaking his weapon, which essentially creates the Karolian Hammer he begins the game with. Claiming to be a member of the Hunting Blades guild, he joins the party. He is the first to propose a solution to heal Halure's tree using a Panacea Bottle to counteract the monster blood poisoning it. Throughout the event, Karol talks about a girl who he wanted to show Halure's blossoms to. This girl is Nan, a member of the Hunting Blades, whom the party meets at Caer Bocram.

Nan reveals that the Hunting Blades kicked Karol out because of his cowardice, but the group does not care. However, when the Hunting Blades trap and then attempt to kill the Dreaded Giant, Karol is nowhere to be found when the group reunites to defeat the foe. The group finds him above the chamber where the Dreaded Giant is fought, arguing with Nan, who is berating him on running away. Some of the citizens of Dahngrest treat him the same way. After Phaeroh attacks Dahngrest to get at Estelle, Karol decides to form a Guild, with the reasoning that a strong Guild would be the best way to repay Don Whitehorse for the protection he offered Dahngrest. He forms Brave Vesperia with Yuri, Repede, and Judith to promote good deeds and do justice. Yuri names him boss because the guild is ultimately his idea, though he admits that he is not ready for the position.

When the events involving the attack on Nordopolica and Don Whitehorse's sacrifice come to pass, Karol remains paralyzed by his indecision and fear. Shaken by the loss of his idol and hating himself even more, Karol moves to run away. Yuri is disgusted by Karol's attitude and tells him that the guild will leave him behind if he hesitates any longer. After mulling over the words Don Whitehorse told him about standing up for himself yet being able to ask for help, he resolves to join the party to meet Judith, but he denies the "boss" title until the guild feels that he has done something worthy of it. During this period of time, Karol, burdened by emotions, is unable to sleep.

Over a series of scenes obtained by sleeping at Dahngrest's inn, Karol talks with the Don's grandson Harry and begins to train with the Don's weapon. He also tells Yuri about his dreams, about him being helpless to save those he loves in them. By training with the Don's weapon, however, Karol finds some measure of peace in himself, as well as learning the "Special" skill to use his mystic arte Overlord Reign Impact. After the groups saves Judith and Ba'ul, Karol calls a guild meeting and displays a new maturity when he lays bare his own weaknesses, about his inability to help his fellow guild members, but he also lay bares the mistakes of his fellow guild members and accepts them anyway. It marks one of the occasions where Karol acts as a true leader by acknowledging his own failures and attempting to atone for them, as well as making others atone for their failures to the guild.

Karol's time to shine comes at the Blade Drifts of Zopheir. When the Baitojoh manages to trap the party in an aer krene, Yuri knocks Karol out of the aer krene's area of influence. Yuri tells him to run, but Karol visibly struggles with that urge. Then, defiantly, Karol faces the Baitojoh to protect his friends. He holds his own, until the the monster manages to knock his weapon away. He stands his ground though, resolving that, as long as his friends are there, he would refuse to back down. When the Baitojoh charges at him, Karol is knocked into the air, but, in that instant, he manages to grab a sword laying there, the Bravior, which he uses to strike the monster and free his friends. Afterward, he passes out from exhaustion and is unable to fight for the rest of the Blade Drifts.

In practice, Karol is one of the comic relief characters when the brave front he puts up clashes with his cowardly actions. He is also frequently abused by Rita for various comments, and he has a habit of attempting to name things with overly long and childish names. Due to his youth, however, he finds himself fleeing more than not and is unable to take some of the harsher truths in the world, but he learns over the course of the game to have confidence in himself and his guild, though he retains his childlike exuberance. By running Brave Vesperia, he learns what it means to not only be in a guild, he also learns what it means to be a leader of one. Because of his former affiliations with the other guilds, he is widely knowledgeable about certain aspects, such as monsters and their behaviors due to his time with the Hunting Blades.

Karol fights using axes, hammers, and grand swords as main weapons, and his bag as a sub weapon. Many of his artes have slightly more childish names, like Nice Recovery Smash and Ultra Punishing Swing, possibly reflecting his age as a child, but he is one of the strongest characters in the game, as well as sporting tank-like defense on par with Estelle. He can be rather slow in battle, but he makes up for it with raw strength, and, though he can not use magic artes, he does have an array of supporting artes in battle as well as artes to debilitate enemy parameters. Karol can also use the "Mighty Charge" skill to increase the potency of his artes. Karol's strongest weapon is his Infinity, which he obtains from the contest in Dahngrest, fitting as it culminates in him professing his admiration for his love interest. His strongest sword is the "Bravior", which teaches him the "Motion Change" skill that causes his battle movements to reflect his newfound confidence when he obtains the weapon.

Karol appears in Tales of Crestoria's limited time quest: "Honor Among Thieves". He heard a rumor about a certain town turning into a casino at night. He eventually accidentally caught the mayor having a secret conversation with a Medagalian knight, hearing that so long as the mayor upheld his end of the deal, the Order of Knights would not interfere with the town's business. When he was told of the situation, Malik Caesar offered his service to help Karol investigate. Wanting hands-on experience for the future guild he planned on running, Karol hired Malik. Karol is first seen fighting a group of monsters with Malik when the party arrives to assist. When Karol explains the situation to the group, Kanata Hjuger offers the party's services to investigate. 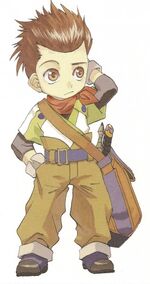