Karyl Sheeden (ジョニー・シェデン, Jonii Shiden?, "Johnny Shiden") is one of the protagonists in Tales of Destiny. He is an estranged 26-year-old son of an aristocratic family, choosing the lifestyle of a bard over the riches of his family's estate.

The group first meets Karyl in Moreau, where he is entertaining a crowd with a song. When a guard approaches the event to announce that Tiberius Terazzi is in town, Karyl disappears, and the group goes to see what Tiberius has to say. Tiberius quickly notices Leon Magnus and orders his guards to seize the group, initiating a chase through the city that Karyl ends by hiding the group in the local inn and distracting the guards until they leave. Posing as informants, the group listens to Karyl explain how the Swordian Chaltier was stolen from Aquaveil and collaborates with him on infiltrating Tiberius's castle in the Aquaveilian capital of Terazzi. Karyl claims to need Fayte Moreau's help to bypass the castle's heavy security, but he is missing.

Soon afterward, an informant enters and tells Karyl that Fayte has been captured and is being held in Moreau Castle by Batista Diego. Although Karyl leaves without the group, they meet him outside the castle and join forces with him to rescue Fayte. Inside, they find Leianna, Fayte's wife, and secure her before pressing forward and confronting Batista in the castle's sky throne room. After Batista's defeat, the group frees Fayte, who introduces himself as Moreau's prince, and Karyl convinces Fayte to ready them a ship to Terazzi so that they may put an end to Tiberius's tyrannical reign. Onboard the ship to Terazzi, a conversation between Karyl and Fayte provides some insight into their past. They had a childhood friend named Eleanor Lindow (エレノア・リンドウ, Erenoa Rindou?), for whom they both developed feelings. Karyl stepped aside and allowed Fayte to be with Eleanor, but Tiberius killed Eleanor in an undescribed event. This fueled Karyl's longing for revenge against Tiberius, and Fayte eventually married Leianna.

In Terazzi, the group manages to infiltrate the castle, finding Tiberius with Lydon Bernhardt, whom the group has been pursuing ever since he stole and fled with the Eye of Atamoni. The group then fights Tiberius, and Lydon escapes on a Flying Dragon during the action. Defeated, Tiberius claims that Lydon has fled to Phandaria before challenging Karyl to a duel, to which Karyl agrees. Before the duel begins, Tiberius questions Karyl's intentions, mentioning Eleanor and the power that once belonged to Karyl's father. Karyl responds by claiming to be acting as an ally of the group, asking to borrow Stahn Aileron's Swordian, Dymlos, before Leon tells Karyl to use Chaltier and lends the Swordian to him. In a swift clash, Karyl overpowers Tiberius with his expert swordsmanship, and Tiberius dies shortly afterward, praising Karyl's technique with his final words. Karyl then joins Fayte and the others outside as the townspeople rejoice Tiberius's death, parting ways with the group as they head to Phandaria in pursuit of Lydon.

He may seem fragile from outward appearances, but Karyl can provide useful support in the battle party through songs played on his lute. When his lute songs are learned, Karyl can become surprisingly strong, despite not wielding a Swordian.

Karyl appears as an omega nexus captured by the Salvation Front and imprisoned within Phantom's mirrage array. During the Mirrorshift, he manages to escape in the chaos, but the exhaustion from having his anima drained leads to being captured again, this time by the Asgard Empire. While prisoner, he learns about the Living Doll project intended to bring people back to life. Fearing that his late love, Eleanor, may be chosen as a subject, Karyl passes on the opportunity to escape when Sync arrives to rescue hostages in Asgard.

During the Empire's research into their spirit-binding technique, it is discovered that Karyl has compatibility with Lorelei, the Spirit of Sound. The bard refuses to cooperate in harnessing its power, which results in torture and being forced to wear an anti-mirrage bracelet. He is then tossed into a prison cell with Spada Belforma, whose past life as Durandal leads Karyl to suspect that the Empire is interested in creating weapons akin to the Swordians.

In an effort to sabotage the Empire's plans, the dissident soldier, Baldr, later releases the two prisoners when security is low and informs them of a rendezvous point with the party. Barely able to move, Karyl relies on Spada to carry him, but soon Richter Abend and his forces appear to recapture them. Fortunately, the cavalry arrives as Ruca Milda, Stahn, and the rest of the party jump in and force the Asgardians to retreat.

While he recovers and waits for the party to finish his omega nexus bracelet so he can rejoin the battlefield, Karyl volunteers to be one of their representatives for the exoflected Phandaria region, along with Judas. 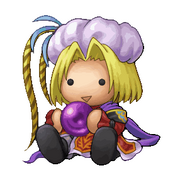