Kate (ケイト, Keito?) is a supporting character from Tales of Symphonia. Being a half-elf in the flourishing world of Tethe'alla, she is forced to work on the laboratories in Sybak for the rest of her life. Kate is the one who assists Lloyd Irving and the others to escape when captured, so that they can save their friends Genis Sage and Raine Sage.

Kate was born by an elf woman and the Pope of Tethe'alla. As her father tells how he got old while she remained the same, it is likely that she is older than she appears. The way Kate tells about her relationship with her father, it is possible that he hardly ever visited her, and she possibly lived with her elven mother. However, the Pope most likely tried to get to know Kate, as he himself states in the present that he watched his daughter stayed the same while he himself aged, something he eventually terrified. Eventually, the Pope of Tethe'alla established the law that forced half-elves to be prisoners in the laboratories of Sybak, leaving Kate to be held in the laboratory for the rest of her life. About twelve years before the storyline, Kate's father visited her and wanted her to lead the Angelus Project and experiment with Presea Combatir together with the dwarf Altessa. Happy that she could finally be of some help for her father, she accepted.

At the present storyline, Kate still lives in the Sybak laboratories, now laying low on the Angelus Project. She gets a visit from the Papal Knights, who bring human prisoners from the other world of Sylvarant, and is told to have them in the laboratory until the knights come with resources. Although cold toward the prisoners when the Papal Knights leave, she recognizes Presea and explains to the group that she worked on the Angelus Project. When criticized for doing such things to a child, Kate counters by stating that humans treat half-elves just the same. However, Lloyd defends himself and says that he treats everyone just the same, and Sheena Fujibayashi appears to confirm this statement. Trusting Sheena's judgment, she decides against her laboratory partners' protests to help the group, and shows them a hidden passage they can go through to get out.

Later, Kate gets a visit from Kratos Aurion, who comes to ask her about a machine that produces adamantite, a special-shaped diamond. She shows him the machine and tells him that it is not working, but is astonished to see that Kratos easily repairs it and makes it works, causing several scientists from the upper level to make a spectacle. After Kratos leaves, depending on the player's choice, Kate may get a visit from Lloyd and the group, asking if she has seen Kratos. Then, Kate tells them about the incident with the adamantite machine, making Lloyd and the others wonder why he needs the diamond.

Because she helped the prisoners escape, Kate is punished by being sent to the coliseum in Meltokio for her death in the arena. When Lloyd and the others come to the Elemental Research Laboratory to get a special-made candle for entering the Temple of Darkness, they decide to save her, as it is their fault she is being punished. The player then must choose which character must fight one round in the arena and then save Kate. At Kate's request, they take her to the fallen village of Ozette, where she reveals the truth of her past and family. She then states that she will be in Ozette to think more about her family and half-elves, as to clear her mind. Without doing a side-quest, this is the last time she is seen in the game.

Off-screen, the Pope, who is now in hiding, finds Kate and asks one last favor of her, though it is unlikely she accepted. Because of this, he drugged her and, possibly with the help of the ninja Kuchinawa, used some kind of skill to make her appear as Princess Hilda, who he kidnapped earlier. Because the ransom to get Hilda back is to hand over Zelos Wilder, the Chosen of Tethe'alla, the Pope wants to use Kate to make them think that it was Hilda, but Zelos sees through this easily. The Pope hurries to get away, leaving the still drugged Kate behind. Later, when the group plans to persuade the Pope, Zelos decides to let Kate rest in his mansion and asks his butler Sebastian to help her and explain everything to her when she wakes up. While asleep, the Chosen also explains to a confused Sebastian that it is time for Zelos to let go of his hatred for half-elves. After waking up and being explained to, it is likely that she was able to go back to Ozette without being punished for being a part of the Pope's plans. This will then be the very last of Kate in the game. 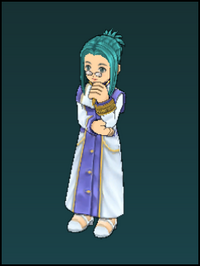 During her stay in Ozette, Kate finds herself listening to Mithos, a presumed former citizen of Ozette, Zelos Wilder and Kratos Aurion in the forest, hearing about their plans and Kratos's connection with Lloyd. She is, however, caught and brought to Welgaia as a prisoner, saved from death because she is a half-elf. When she calms down in Welgaia, she meets Kratos after Lloyd and his friends have been captured. Kate expresses her disbelief about the truth of Cruxis and Mithos the Hero, and Kratos begins explaining how Mithos, whom everyone believes is a hero, could be behind such horrible things.

They then start talk about Kratos's feeling for Lloyd. When it is revealed that Lloyd and the others escaped, Kate is informed that Kratos indirectly helped them escape by ordering the angels to guard other locations. He then helps her escape from Derris-Kharlan. When they are at the Tower of Salvation, Kate says that she would like to be led to Ozette, as she wishes to rebuild the village. Just then, Yuan Ka-Fai interferes and takes Kate hostage, ordering Kratos to follow him. Some Renegades are then sent to take her to a safe place while Yuan and Kratos leave.

Later, when Kate hears that Mithos has taken Kratos and locked him up, she asks Yuan to take her to the Tower of Salvation to help him, as she was the reason he got captured in the first place. Pretending to be an Angelus Project researcher of Desian rank, she manages to trick the guard and help Kratos to communicate with Zelos one last time before they both get back to Tethe'alla. Back in some forest after Mithos has been killed, Kratos tells Kate and Yuan about releasing Origin, which will result in his death. Although Kate is against this, Kratos stands for his, and leaves after telling Yuan to take Kate back to Ozette. After Kratos leaves, Kate begs Yuan to help him. Yuan explains that there is a way to do so, and although it could end up with both of them dying, he plans to do it. Wishing Yuan good luck, Kate returns most likely to Ozette. Whether she gets to know what happened afterward is unknown.

Kate is seen as analyzing and thoughtful. While not much of her personality is shown in the game, her character is presented more in Tales of Fandom Vol.2, where she plays an important role in Kratos's story. Here, she shows more of her thoughtful and intelligent character, and apparently does not bear any prejudice, as shown when she still cares for Kratos even though he is human and an enemy. She also feels like paying people back their favors, which she shows when she returns the enemy base to help Kratos escape.