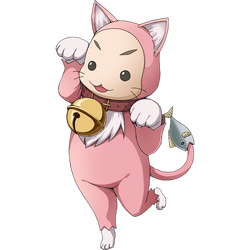 In Tales of Eternia, there is a place known as Katz' Village on Celestia, which is accessible only with a flying vehicle and inhabited solely by Katz.

In Tales of Symphonia, the Katz host searches and often give a reward for successful searches. Their home is Katz' Village. A Katz costume is available for Genis Sage upon completing a sidequest.

In Tales of the Abyss, Katz do not play a large role. They are found living on Nam Cobanda Isle, built by the Dark Wings.

In Tales of Symphonia: Dawn of the New World, Katz possess three important roles: the first is allowing the party to choose which monsters they want to accompany them, the second is cooking that allows the monsters to grow and evolve into new classes, and the third is allowing Emil Castagnier and Marta Lualdi to take missions from clients around the world. Such locations are Dwarves' Ore Mine, Sandy Windy Cave, Volcanic Cave, Frozen Crevasse, and Twilight Palace, which can not be accessed via the World Map. The Katz still live in Katz' Village.

In Tales of Graces, there is a place known as Katz Korner, which is based on a small theme park and inhabited solely by Katz.

Katz are part of the seraphim kind in Tales of Zestiria. The members of the Katz Trio, consisting of Bad Katz, Gangsta Katz, and Rowdy Katz, can appear as part of any random encounter through the "Katz Trio" Battle Action, obtained from the game's downloadable content.

In Tales of Berseria, Katz are part of the malakhim kind. Some three odd years before the game's main plot takes place, Katz had a big party which resulted in them losing their souls. Velvet Crowe and her allies can collect them in exchange for the ability to open Katz boxes, roughly half of them having an item inside them, usually an attachment.

In Tales of the World: Narikiri Dungeon 3, Katz appear as a costume for Julio Sven and Caro Orange that only have two artes: Hikkaki and Neko Punch.

In Tales of Crestoria, Katz live in Katz Village, located in the "inner world". They lead a rather peaceful live until some of its inhabitants begin to mimic human behavior, causing turmoil in the village. In the limited event, "Battle Katz! Klash of Pawz", a collective of deceased Katz souls known as a katzlective (ねこにんソウル?) possesses the body of Elle Mel Marta and summons Misella and with hers and Tear Grants' help resolve the issue. A variety of Katz also appear as enemies in Power-Up and Gald Quests. 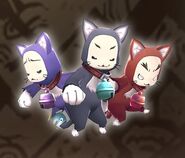 The Katz Trio in Tales of Zestiria.

Julio Sven in a Katz costume in Tales of the World: Narikiri Dungeon 3.