Keele grew up in Rasheans with his parents, Gizro (ギズロ, Gizuro?) and Lamina (ラミナ, Ramina?). He was friends with Reid and Farah and involved in going to Regulus Knoll in search of "star fragments". At 13, he enrolled in Mintche University, where he became a research assistant in the Light Craymelology department. He created the theory of World Chain Destruction, for which he was kicked out of the University. He left for the Mt. Mintche Observatory, which is where Reid Hershel, Farah Oersted, and Meredy eventually find him. At the end of the story, he chooses to stay in Celestia with Meredy.

When Keele is first introduced, there is no mistake that he is flat out rude, which Meredy even states. After spending years as a child being a crybaby, Keele grew up in the University setting where he covered up his insecurities with his intelligence and smugness. He even knows he is rude toward others, but chooses to ignore it. To him, his studies and research are first priority. In essence, Keele is a true scientist. He stopped believing in childish fantasies and based his entire world on what could be tangibly proven through science. The University gave him a power he did not have as a child. Since he was obviously very intelligent from the start, he used this to boost himself up. He became very anti-social and stubborn.

Although Keele is obviously the smartest playable character in the party, he is completely clueless when it comes to the real world. Having spent so much time wrapped in his studies and books of facts, he is unable to see in shades of gray at first. Things are either black or white, true or false. This is why Keele is so stubborn and hard to deal with, because he has based his entire life on right and wrong. Through the journey, he evolves away from this shell of his and manages to see the "maybes" and to believe based on faith alone.

Keele is a mage and starts with Aqua Edge, Wind Blade, and Fireball Craymel Artes, which element-wise are Water, Wind, and Fire, three of the four elements native to his homeworld of Inferia. Despite being a Light Craymelology student, he lacks Light-related Craymel Artes in his initial repertoire. Outside of his original appearance, Keele uses Water, Wind, Fire, and Light Craymel Artes.

Opening still from Tales of Eternia. 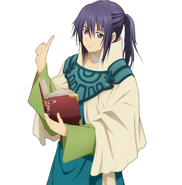 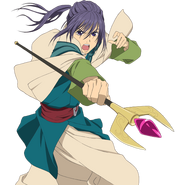 Keele as the "Mad Scientist Seeking Glory" in Tales of Asteria.