Kohaku is a girl setting off from her home town in need of a Soma, along with her older brother, Hisui Hearts. At the beginning of the story, they are chased by Incarose, looking for the Somatic Sydan Meteor. They soon find themselves on the edge of a cliff, cornered by Incarose. Knowing full well of her fear of heights and Hisui's inability to swim, Kohaku pushes Hisui and herself off the cliff before Incarose's energy beam hits them. Kohaku then wakes up to find a boy leaning in on her, and responds by pushing him away and knocking him down. When she looks around, she finds herself alone on a beach in Seaville. The boy explains that he is Sydan's grandson Kor, and that Sydan had already left to run an errand. When Kohaku mentions being under the impression Sydan had more than one Soma, Kor mentions another one at the shrine out near the cape. During the journey, Kohaku mentions the woman within her Spiria, and to her surprise, Kor actually believes her. Suddenly, Hisui pops out of a bush and immediately gets the wrong idea at first, but comes along all the same. While giving explanations, Kohaku refers to Incarose as "her".

At the shrine, the woman in Kohaku's Spiria opens the seal, giving her the Soma anklet Rondeau (エルロンド, Erurondo?, "Elrond"), which previously belonged to Kor's mother, Kardia Meteor. During the events of the story, she develops a love interest in Kor and shows a real trust toward him.

Kohaku's weapon does not change throughout the story. Even from the process of Soma Evolve, it will not change forms during battle. However, upon reaching its final Soma evolution, the weapon will change into one of two forms that affect its appearance during battle, depending on which Soma Evolve path the player chooses. Both of these options are considered Kohaku's ultimate weapons. Kohaku fights by using a mix of martial arts and Fire, Wind, and Light magic, though she is mainly of the Fire element. She can act as a decent healer, though that role is generally filled by Hisui. Her Combination Blaster is Final Fury, which consists of a mixture of many of her artes, finishing with a cherry blossom kick. In Tales of Hearts R, she gains two new soma artes Triple Blossom and Skyscraper at the cost of Cherry Hail, gains a new hybrid arte by the name of Crimson Twister, she loses several healing artes with the exception of Revitalize that now belongs to Hisui, Fairy Circle and Infernal Prison that were once her combination artes are incorporated to her repertoire.

Kohaku's name is localized as Amber Hearts in Tales of Graces. She appears as a cameo boss, along with Veigue Lungberg from Tales of Rebirth and Reala from Tales of Destiny 2. In order to fight her alongside the other Tales characters, she must first be defeated in the Zhonecage. Then, the player must find her "missing precious item", an anklet, which she later reveals to be a Soma that is very important to her. 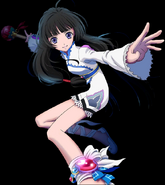 Cut-in image for Tales of Graces.

Cut-in image for Tales of the Rays, spirit gear attire.