Kongwai Tao (コンウェイ・タウ, Konwei Tau?) is a newly-introduced character in Tales of Innocence R. He claims to have come from another world for the salvation of two souls in this world.

In the world to which Kongwai and QQ Selezneva belong, the adventure of Ruca Milda is well known as a legend. It is believed, however, that the world to which Ruca belongs actually exists. Many have attempted to travel to this world, but no one ever came back. Kongwai and QQ later become the first to return from this world alive. Naturally, Kongwai had already known all about the journey he would take along with Ruca and the others, yet he neither reveals this to them nor interferes in the outcomes of the events that are sure to happen. His only aim in this journey is to save, or rather, to obtain two souls which turn out to be that of Thitose Cxarma and Hasta Ekstermi.

Kongwai is first seen in the very beginning of the story when Ruca bumps into him in Regnum, the Imperial Capital. He briefly introduces himself and talks about his objective to save two souls, although Ruca does not understand what he is saying. He says that Ruca's soul is not one of them and leaves. Later in the story, he saves Ruca's party from a monster and joins them after the battle, offering to help them in their journey afterward. At the end of the story, Kongwai, having obtained the souls he wanted, leaves the party without informing them and returns to his world.

Kongwai has an androgynous look that frequently gets himself mistaken for a female, which he utterly hates. He never hesitates to punish whoever confuses his gender, even it is one of the party members. Apart from these outbursts, he is usually calm and quiet and speaks in a gentle and deliberate way. But he also has a calculative nature that is revealed in the talks he holds with QQ in the Triverse language that only the two can understand. Throughout the journey, he only voluntarily involves himself in the events with which his sole aim is concerned.

Considering himself an outsider, Kongwai seldom interacts with other members of the party except QQ, with whom he shares a seemingly friendly relationship just like everybody else. In fact, when their talks in the Triverse language are translated into Japanese in the second playthrough of the game, it is shown that strong enmity exists between the two, who belong respectively to two countries that are at war with each other back in their own world. Possessing sufficient knowledge of Ruca's world, Kongwai is usually the more confident of the two. Before returning to their own world, Kongwai declares the end of the "friendship game" with QQ, to which the latter responds with a resolution to kill him the next time they meet.

Kongwai is a pure offensive mage who has no means of attacking through strike artes or providing healing. He uses a book as his weapon, but he does not deal damage with the book itself. For his normal attacks he generates energy that takes the shape of swords or spears around where the enemy stands and then penetrates it with them. This essentially gives him a limitless normal attack range frequently associated with ranged bow-using characters. Kongwai is also the first mage in the series to possess a learning system that enables him to learn spells from enemies simply by getting hit by the spell once. Thanks to this system, he is able to master almost all of the offensive spells in the game. Apart from the spells learned in this way, he gets several of his own ones as he gains in experience.

Cut-in image for Innumerum Arts in Tales of Innocence R. 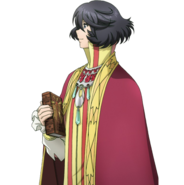