Kor Meteor (シング・メテオライト, Shingu Meteoraito?, "Shing Meteoryte") is the main character from Tales of Hearts. Kor lives with his grandfather Sydan Meteor in the town of Seaville. He is given the Soma Asteria (アステリア, Asuteria?) by his grandfather, which takes the form of a sword that emerges from his bracer. His quest begins after finding Kohaku Hearts and her brother, Hisui Hearts, on the shore.

In the beginning of the story, Kor lives with Sydan and has successfully progressed in his training to be given his grandfather's Soma. When Sydan is called away to deal with a case of the disease despir, Kor comes across Kohaku Hearts, who had just fled from the witch Incarose while searching with her brother, Hisui Hearts, for Sydan. Kor leads Kohaku to where his mother's, Kardia Meteor's, Soma is sealed while meeting up with Hisui, only to be attacked by Incarose. Sydan is fatally wounded in the effort to save them, while Kohaku collapses when Incarose infests her with xerom. Kor attempts to strike Incarose down in anger, drawing her attention to him while she retreats. Now with time to regroup, Kor uses his powers as a Somatic to perform a Spiria Link and enter Kohaku's Spiria Nexus, where he meets the emerald-haired Lithia Spodumene at Kohaku's Spiria Core.

Kor then fends off attacking xeroms with a dark aura, which causes him to be to be thrown out of Kohaku's heart and her Spiria to be shattered. With her Spiria Core scattered over the world, Kohaku is an emotionless shell of her former self. Feeling guilty and wishing to see Kohaku's smile again, Kor resolves to go all over the world to retrieve Kohaku's Spiria. After Kor manages to retrieve all of Kohaku's Spiria, Kor discovers a depressing truth about himself: the creator of xerom, Creed Graphite, lies within his heart, and by succumbing to anger against Incarose, Creed is able to awaken. With time and reflection, Kor realizes that Creed is a dark mirror of him, someone he could have become if he didn't have the support of his friends. With the resolve and clarity gained from his realization that he loves the world, he leads the charging in stopping Creed's plan to absorb Organica's Spirias with Gardenia.

Kor is an easygoing and cheerful person, but his personality can turn serious each time one his friends, especially Kohaku, is in need. Kor is also a persistent person, as it is proven by his action to retrieve Kohaku's Spiria cores, which were scattered all over the world. He is also a selfless person when it comes to others. He does not care what happens to him as long his friends are safe. Due to his curiosity and personal inexperience, he lacks delicacy in his speech and conduct; he does, however, notice his mistakes and is able to properly reflect upon them. On the other hand, Kor is also prone to rage when others harm his friends, and he spends much of his journey mastering his darker emotions.

Kor's Soma is in the form of an extendable short sword, so he is a close-ranged fighter devoted to speed and combos. He is not a fragile character, but he does not have the same raw damage-dealing potential as Ines Lorenzen or Kunzite. As a rarity for Tales male protagonists, Kor's artes are primarily of the Light and Lightning elements, with a few Fire artes.

Kor is one of the many nexuses summoned by Phantom's mass exoflection of worlds. While wandering Tir Na Nog, he at some point reunited with Kohaku, and then the two met Richard struggling with Lambda possessing him. Mistaking the energy being for a xerom, the Somatics attempt to Spiria Link with Richard, but something goes wrong and leaves Kohaku in a comatose state. It was then that Mercuria appeared and offered to help restore Kohaku's Spiria.

Kor starts off as an antagonist working for the Asgard Empire. Together with Caius Qualls, they are occasionally seen aiding their forces. Eventually, Kor learns that Mercuria never had any intention of helping Kohaku, and he nearly severs ties with the Empire before Kratos Aurion convinces him to continue working as a spy. However, it does not take long before he is imprisoned due to venting his frustrations with Mercuria. Caius does not fare much better either, and the two are soon forced to flee with Rubia Natwick.

As a member of the party, Kor frequently uses his Soma to help those with damaged Spirias. Also, thanks to mirristry amplifying his Spiria Links, he can now bring non-Somatics into Spiria Nexuses to assist him.

Some time before the start of Tales of Crestoria, soldiers from Medagal came into Kor's village and kidnapped several young children under King Gadel's orders. Kor makes it his mission to get the kids back.

A knight spots Kor hiding in a carriage and thinks he's a bandit. During the fight, Kor reveals he has a Soma with him, and hears the knight's sword talk. The knight takes the Somatic with him to talk privately. The knight introduces himself as Leon Magnus, and explains that his friend, Stahn Aileron, had his soul sealed in his sword. Leon and Stahn make a deal with Kor to help rescue the kids in return for helping restore Stahn.

Leon and Kor hurriedly infiltrate the castle and find the children, but not before being caught by Gadel, who tells Leon that he would welcome him back into service if Leon kills Kor. Leon refuses and fights Gadel's men, giving Kor and the kids an opening to escape.

Somehow, Leon manages to escape without being condemned as a transgressor, and rendezvous with Kor at an inn. With the kids safe for the time being, Kor upholds his end of the bargain to attempt to pull Stahn out of his swordian form. After Kor's failed attempt, Leon catches wind of a group of knights called the "Golden Blade" led by a man with golden hair that fits Stahn's description, giving the pair a lead on how to restore Stahn. Leon leaves Kor to take care of the kids while he heads to the Golden Blade's last known location, a town that has destroyed its vision central. 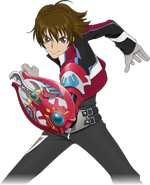