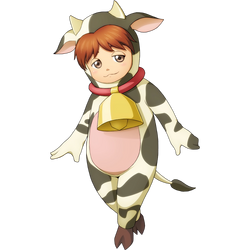 Kowz are recurring characters in the Tales series, appearing only in Tales of the Abyss and Tales of Vesperia.

Kowz are a variant of the more widely-seen Katz, appearing as small children in animalistic costumes, reported as a race of their own in some games. This trend is also seen with the Turtlez in more recent games, as well as the short-lived Rabbitz in Tales of Rebirth. In both of the games in which they appear, the Kowz appear in secluded locations and ask the protagonists for certain items, usually providing something in return. This reward can either be good or bad: "good" implying more useful; "bad" implying more generic.