Kronos (ミクトラン, Mikutoran?, "Miktran") is the final antagonist of Tales of Destiny. He is the leader of an ancient people known as the Aetherians, people who lived in the sky and ruled over the Er'thers, the people on the ground.

Kronos is the leader of the Aetherians, a group of people who lived on the floating landmass which constitutes the Aethersphere. He oppressed those who lived below him, shattering the surface with the Lens-powered superweapon known as Belcrant. Kronos led an elitist regime that viewed the Er'thers as insects, deserving to be contained and exterminated so that his own people could flourish. This oppression lead to the defection of many scientists to the surface, due to their malcontent with the regime that Kronos ruled. These scientists brought with them much advanced Aetherian technology, giving the Er'thers a means of retaliation against Atherian rule using their own weapons. This gave rise to the Aeth'er Wars, a series of planetary-scale conflicts which eventually culminated in the creation of the Swordians, a set of six sentient swords which enhance the attributes of their users and enable them to use potent magics unmatched by the use of normal lens.

Eventually, the Er'ther forces managed to invade the aeropolis of Dycroft by launching the Er'ther Army Base Radisrol into the Aethersphere. The team of Swordian Masters, led by General Laville Clemente, penetrated into the room which housed the Eye of Atamoni, the primary source of power of the aeropolis. Kronos made his last stand here, challenging Lieutenant General Karell Berselius to a duel. Karell managed to deal a fatal blow to Kronos, but the king retaliated, striking Karell by piercing into his Swordian's Lens core, shattering through it and penetrating Karell's body, ending his life. Due to the damage to his Swordian, the Lens core's matrix lost its imprint of Karell's personality, and Kronos focused his own spirit into the weapon using the power of the Eye of Atamoni, bypassing death in spite of the loss of his physical body.

With the death of Karell, the Swordian Berselius was abandoned within Dycroft out of reverence to his heroic deed of killing the tyrannical leader of the Aetherians. However, the weapon was taken by the Aetherians prior to the sinking of Dycroft into the oceans, and it was carried with the Aetherians as they were exiled to the surface continent of Calvalese, a wasteland area which had been devastated by the war due to its value, as the source of the mineral alloy known as Belselium which had been used to build many advanced devices including the Draconis. The Swordian was hidden within the continent, forgotten by the ages, until many centuries have passed by the time an expedition led by Hugo Gilchrist, the leader of the Oberon Corporation, rediscovers the lost weapon.

After finding a new master, Kronos takes on the role of Berselius, pretending to be the Swordian's sentient persona. From this position, he begins to influence Hugo's thoughts, whispering suggestions of madness to break through Hugo's force of will, chipping away at his self-control until he is led to kill his wife, Chris Katrea. After this event, Hugo liberates himself from his inhibitions, freeing himself to pursue his own dark desires which begin to match the goals that Kronos inspired within his mind. He sets about an intricate plot to influence others to reveal the presence of the historical Eye of Atamoni, aware through his position as an adviser to the king of Seinegald that it had not been destroyed but that it remains closely guarded, so that he could use its power to revive the Aethersphere.

Hugo does not recognize that the idea of pursuing the Eye of Atamoni was the suggestion of his Swordian, believing himself to be in full control of his actions. But Kronos continues to transfer his consciousness into Hugo's body, eventually overpowering Hugo's mind entirely and taking over his body by the time the party of Stahn Aileron assaults the restored Belcrant. When he confronts the party, Stahn is able to recognize that Hugo is no longer acting like himself, at which point Kronos reveals himself to the party, using the Eye of Atamoni to transmutate Hugo's body into his own original form. Even in this body, however, Hugo shows some remaining signs of resistance, holding Kronos back from killing his daughter, Rutee Katrea, and detaching Belcrant from the Aethersphere to allow the group to escape, before Kronos reasserts control and banishes Hugo's persona completely.

When the party returns to the Aethersphere, they venture through Dycroft, discovering many rows of tubes filled with people, whom Rutee believes are clones of the Aetherian population prior to the civilization's downfall. Kronos demands that they should not be touched, claiming that the filth of the Er'thers would soil their growth. He goes on to say that the Aethersphere has been restored to its glorious terra-formed state, filled with green brilliance and shrouded in the warm light of the sun, and that its true form cannot be compared with the surface. Retorting that the sun belongs to everyone, Stahn rejects the fake land that Kronos created, and Kronos engages Stahn's group in battle, only to be defeated.

Unable to accept defeat, he calls upon the Eye of Atamoni, drawing its power into his body as it is ripped apart at the subatomic level and reformed into something more monstrous and deadly, claiming that this is the power that will make him a true god. Ultimately, Kronos is defeated even in this form, and his body vanishes completely as the Eye of Atamoni destabilizes to catastrophic levels. This represents Kronos's true death, as his consciousness is destroyed along with his body, and the party proceeds to destroy the Eye of Atamoni as well, using the power of the lens cores within each Swordian to overload the Eye and use its energy to rupture and destroy the Aethersphere.

Referred to as a being of "pure evil", Kronos desires the world for himself and to be worshiped as a god by its people. He considers the Aetherian race to be the only ones worthy of the world, pursuing genocide campaigns against the surface-dwelling Er'thers in order to promote his regime of racial superiority. Kronos is a particularly persistent being who would not even allow his physical death to stop him from subjugating all others under his will. However, he is also very patient, willing to wait for long periods of time in order to allow events to unfold in a way that he favors, before assuming control of more factors along the way to achieving the rebirth of his ideal world.

In battle, Kronos floats in the air and possesses the ability to teleport at will, often using this ability to strike his targets from their unguarded backs. Having control over the Swordian Berselius, he can cast many high-level magical spells, including the powerful Seraphic Feather, a shockwave of light which emanates from the Swordian to deal heavy damage rapidly across the entire battlefield. This spell serves as one of his Damage Break attacks in the PlayStation 2 remake of Tales of Destiny, the other being Meteor Swarm.

After calling upon the power of the Eye of Atamoni, Kronos has two different final forms. In the original game, he transforms into Ultra Kronos (ＮＥＯミクトラン, NEO Mikutoran?, "NEO Miktran"), an ironically incomplete transformation that transmutes his body beyond recognition.

In the PlayStation remake, he transforms into a purple, humanoid, insect-like creature with four tendrils capable of firing lasers, merging his body with his Swordian and the raw power of the Eye, known as Miktran Excessive (ミクトランイクゼシブ?). He gains extreme rapidity involving various dash attacks, and he teleports frequently around the battlefield. His lasers possess both long-ranged and the potential for adverse status effects. At various points during battle, he can charge an armor which nullifies stagger effects from all attacks for up to 30 hits each time. Kronos can use various spells of Light and Dark elements such as Black Wing and Ambivalence, and he has physical attacks of varying elemental properties, such as the Wind-elemental Hell Slicer, the Water-elemental Deep Grudge, and the Fire-elemental Burst Dash, the latter two of which were added to his abilities as part of the Director's Cut version of the remake.

Kronos's Damage Break attack is a particularly deadly application of Spark Wave, with which he teleports directly over a group of targets and instantly spawns a sphere of electricity around himself, which is guaranteed to stagger the targets along with a high chance of stunning them. In addition to this varied set of abilities, Kronos has access to four Blast Calibers, three of which are used as counters to specific artes: Raintive Orion, Surviving Hollin, and Celestial Earth, while his fourth Blast Caliber is Melty Earth. 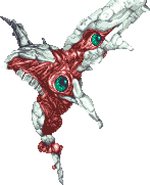 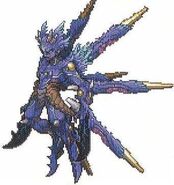