Kyle Dunamis (カイル・デュナミス, Kairu Dyunamisu?) is a protagonist in Tales of Destiny 2. He is the only son of Stahn Aileron and Rutee Katrea, the main hero of Tales of Destiny.

Kyle is very much like his father, Stahn. Kyle's straightforward, simplistic personality is similar to Stahn's own, and they share the same problem of oversleeping and requiring someone to wake them up, often in a raucous or violent manner. In spite of these common traits, Kyle remembers little of his father, as he believes that the famous hero left on a journey when Kyle was very young. This is what Kyle has been told by his mother Rutee and his closest friend Loni Dunamis.

In truth, Stahn was killed by an assassin named Barbatos Goetia when Kyle was a child, and while Kyle witnessed the event himself, he repressed his own memories and convinced himself that Rutee and Loni's claims of his father's journey were true. Rutee runs the Dunamis Orphanage based in the town of Cresta, so the other children there are akin to family. Kyle is especially close to Loni, who treats him like a little brother; their relationship has been forged over more than ten years. During their adventure, he also builds a strong bond with Judas, who is later revealed to be his uncle, Leon Magnus. 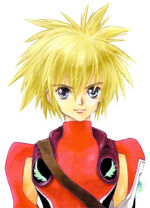 The reason Kyle's last name is not "Aileron" is that when Rutee gave birth to Kyle, Stahn and Rutee decided to follow their practice of giving every child who attends the orphanage the last name "Dunamis". Due to this, Kyle and Loni share the same last name even though they are not related by blood. Kyle has absolute faith that he will become a hero someday due to the heroic bloodline of his parents. Stahn and Rutee were members of the group of Swordian Masters who dealt with the dangerous Eye of Atamoni some eighteen years prior to the start of Kyle's adventure.

Kyle is a fast physical attacker who fights with swords in a frequently wild manner. His strikes are quick yet wide, and he adds jumps or hops to several of his attacks. All of his artes were unique when Tales of Destiny 2 was released, and he is the first main character to not have access to the swordsman mainstay projectile attack Majinken. This revelation results in Kyle's outburst against other main protagonists in the Tales of Fandom Gaiden pre-order extra, as he is the only character in the group who cannot claim to be a "true hero" since he cannot use that attack.

Many of Kyle's artes have been adapted into the movelists of other characters and classes in later games, such as his father Stahn, who retroactively gains Bakuenken and Souhajin, along with a more basic form of Toryuu Rengekiha known as Toryuusen, in the PlayStation 2 remake of Tales of Destiny. The two characters also share the mystic arte Zankuu Tenshouken, and Stahn's Gouma Kaijinken exists as a reference to Kyle's Shouou Zetsurenshou through their similar animations. The Thief class of the Tales of the World: Radiant Mythology series of escort titles takes on Souhajin and Garen Souhajin as mainstays, and the arte Garenjin was created to form the other base arte component of Garen Souhajin.

Kyle also has access to a small library of magic, but his magical abilities are relatively weak and underdeveloped, lacking the ability to extend any of his spells into more powerful forms. He does have one spell, Voltaic Heat, which is normally used as an extension by other characters, but can be performed by itself without extending from Thrust Fang when used by Kyle. He has elemental proficiency ranging the elements of Wind, Fire, Light, and Earth, having access to multiple physical attacks of each of these elements, in addition to his spells. His primary focus is with the Wind element.

Kyle is both a playable ally and costume option in Narikiri Dungeon 3. During the game's first mission, Julio Sven and Caro Orange stop Elrane from preventing Kyle and Loni's first meeting with Reala, and they return the thanks by joining the party. Later, Julio can obtain a costume made from a "Stormbringer" to utilize Kyle's moves.

Tales of The World Radiant Mythology 2

Kyle also appears in Tales of the World: Radiant Mythology 2 as a playable character. Unlike the rest of the cast, he and Reala do not hail from Granide; they come from another world, in which Stahn and Rutee have already married.

Kyle appears in Tales of VS. as one of the initial playable cast, partnered in his story mode with Leon. In his tale, he seeks to win the Yggdrasill Battle in order to find out what happened to his missing father, Stahn, and eventually he and Leon are able to save Stahn from death at the hands of Barbatos.

In Tales of the World: Radiant Mythology 3, Kyle, along with Reala, Loni, and Judas, are introduced during an accident caused by a machine that Harold Berselius was using to try to find Vel Trop. The four characters fall from a portal, which pulled them from their reality into the world of Luminatia. Upon meeting with the Protagonist, they become members of the Ad Libitum guild. During most of the events in the story, Kyle and Loni interact frequently with the present Stahn and Rutee, but only Kyle and Loni are aware of the fates of their future selves in their own timeline. Harold insists that the boys should avoid revealing any information about what happens in their future to prevent temporal paradoxes.

Kyle, together with the Protagonist and Sheena Fujibayashi, are ordered to enter the core of the Brownie Mines. As they approach the core, Kyle discovers Barbatos and attempts to avenge his father Stahn's death from his timeline. The party defeats Barbatos, but the villain grows more interested in Kyle, desiring to challenge him again when their paths cross once more. After the end of the main story, Kyle has a conversation with Judas about the champion of the arena, but they are interrupted by the Protagonist, Kanonno Grassvalley, and Kanonno Earhart. Kyle is surprised to see two Kanonnos in front of him, and he remembers that the champion of the coliseum is named "Kanonno", later revealed to be Pasca Kanonno.

Status image in Tales of Destiny 2. 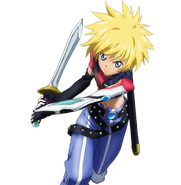