Ladras Lindblum (ラドラス・リンドブロム, Radorasu Rindoburomu?) is the former King of Calegia in Tales of Rebirth. The day of his death, which eventually came to be known as the Dusk of Ladras (ラドラスの落日, Radorasu no Rakujitsu?, "Setting Sun of Ladras"), is depicted at the beginning of the game and ultimately sets much of the game's plot in motion.

Ladras was once the King of Calegia and ruled it peacefully until his death. He was survived by his daughter, Princess Agarte Lindblum, who was crowned Queen after his death. Although Agarte grew up without a mother, Zilva Madigan, adviser to the royal family and also of an unstated relation, served as a mother figure for Agarte. Doctor Barrs was a highly-revered doctor who tended to the royal family, including Ladras himself. Under unknown circumstances, Ladras gradually fell ill. All members of the royal family possess the Force of Moon, and on the day of his death, Ladras used his Force in a way that affected the world. The use of his Force caused Huma to acquire Force, which many found difficult to control, and nature to manifest as Viruses. The effects of this event caused vast amounts of damage and eventually came to be known as the Dusk of Ladras.

Around the time of Ladras's death, Eugene Gallardo, then-commander of the King's Shield, discovered that Barrs had been secretly poisoning Ladras, which prompted Eugene to confront him in a guest room at Calegia Castle. During the confrontation, Eugene noticed Barrs's strange behavior but attempted to reason with him regardless. In the midst of the conversation, Barrs attempted to stab Eugene with a dagger, which forced Eugene to kill Barrs in self-defense. In the aftermath of the incident, Eugene was removed from his position and banished from the castle. When the protagonists fight Zilva near the end of the story, she admits to them the truth concerning that day and Ladras's death. Using her Force of Moon, Zilva swapped bodies with Barrs, poisoned Ladras, and attempted to kill Eugene. Not expecting to be stabbed in return, Zilva switched back to her own body, leaving Barrs to die in his own. 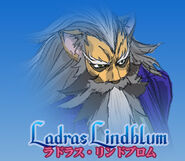 Portrait artwork for Tales of Rebirth.

Opening still from Tales of Rebirth.