Lafarga (ラファーガ?) is a minor character in Tales of Zestiria. He is a Wind Seraph and Dezel's old friend.

Five years before the start of the Shepherd's journey, Lafarga was a guardian Seraph who, along with Dezel, watched over an infamous band of mercenaries called the Windriders. When the team was betrayed, he was killed by a hellion, beginning Dezel's drive for revenge.

In reality, Lafarga was not killed but transformed into a Fuseface hellion, which consumes everything it sees in order to grow. When the Windriders decided to join Rolance at the request of Imperial Prince Konan, Lafarga realized that it was the end of his and Dezel's journey with them. While sad to part, Lafarga accepted their choice, but Dezel was resistant to the idea of those days ending. Soon after, Konan became a hellion and accused the leader of the Windriders, Brad, of murdering his older brother in a conspiracy. A Seraph named Symonne arrived and explained that the reason for the Prince's sudden transformation was, in fact, Dezel's cursed blessing; a truth Lafarga seemed to be hiding from his friend.

When Rose moved to kill Konan, Lafarga shielded her from the Prince's own attack, and once more from the malevolence that was released from Konan's body after she struck him down, transforming Lafarga into a hellion.

Five years later, the Shepherd Sorey and his allies encounter the hellionized Lafarga at Pendrago, where a trap was set for them. Due to his false memories, Dezel activates the armatus with Rose and assumes command over her body in a reckless attempt at killing Fuseface, whom he believes to be Lafarga's killer. When he sees the face of his old friend, Dezel's true memories return and Fuseface mortally wounds the armatized duo before ejecting Dezel from Rose's body and taking her captive. The hellion bonds himself to the dying Rose, preventing the heroes from defeating him as doing so would kill her in her weakened state. In order to save her, Dezel convinces Sorey to use Siegfried with Dezel's life serving as the bullet against Fuseface. In doing so, Dezel is able to sever the bond between Rose and the hellion from within, sparing her body from further harm and killing both Dezel and Lafarga.

Lafarga is a tall man with green eyes and gray-green hair tied back into a long, loose ponytail. He wears a green shirt with a white, barred pattern underneath a black, high collared jacket. Vertical green marks decorate it with four on the front, four on the back, and three on each shoulder. His casual pants are also black, with overall straps hanging at his waist. The fronts of the pant legs "open" to reveal a white fabric. Lafarga's iconic accessory is his black top hat, which is decorated with various charms wrapping all the way around, joined with metal links. He wears brown gloves, and a brown pouch on his right thigh. His dark boots are knee-high with long flaps turned downward.

As a Fuseface hellion, his body is a purple sphere covered in sinew with two large, tendril-like arms holding him in place. Additional, thinner arms appear whenever he needs to take hold of something. At the front of his body is a large vertical slit that exposes an eyeball with a red iris. When it blinks, the eye can be replaced with the hellion's core to reveal the face of the Seraph he once was, which has been merged into it.

Lafarga is very caring and looks after others like an older brother. According to Dezel, Lafarga worries about him in particular due to his brash behavior, and unbeknownst to him, Lafarga seems to hide the knowledge of his junior's curse. He is also selfless, as he did not hesitate to shield Rose with his own body twice.

He speaks with sincerity and is shown to be both optimistic and understanding, as he was in good cheer about the inevitable parting with his beloved companions despite the sadness it brought him. Lafarga loves the Windriders and values his time traveling with them, believing himself to be lucky to do so.

Lafarga likes to be well-dressed.[1] 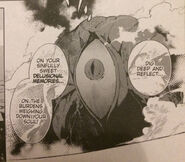