View source
watch 01:03
Tales of Berseria - Character Trailer: Laphicet
Do you like this video?
Play Sound
This article is about the protagonist in Tales of Berseria. For the supporting character, see Laphicet Crowe.

Laphicet (ライフィセット, Raifisetto?) is the deuteragonist in Tales of Berseria and minor character in Tales of Zestiria. A child of the malakhim race, he is initially seen as an emotionless tool, but through his interactions with Velvet Crowe, he gains feelings and selfhood.

Laphicet was originally a child without name or personality, serving only as a magical tool for exorcists. He first appears as a malak serving under Teresa Linares, being referred to simply as Malak Number Two (聖隷二号, Seirei Niigou?). He assists Teresa in stopping Velvet, dealing considerable damage to Velvet and her group until a fire distracts them. When Teresa and Eleanor Hume intend to stop them from escaping, Velvet orders Laphicet to help her, threatening that she will devour him if he refuses. Following orders, Laphicet blasts Teresa and Eleanor away, giving the group time to escape. Deeming his magical abilities to be useful, Velvet decides to take the malak boy with her.

Laphicet initially clashes with Velvet due to his lack of personality. Laphicet stays quiet unless someone talks to him, or if he is given an order, he will follow it without question. Laphicet begins showing emotion when he becomes interested in a compass used to navigate the ship, always carrying it with him. As he interacts more with Velvet, Laphicet gains knowledge far beyond his initial blank slate and eventually develops a sense of self. He begins to become close with Velvet after she decides to name him after her younger brother, Laphicet. Eventually, it is discovered in a flashback revealed by the Earthen Historia that Velvet's late sister Celica Crowe was pregnant with Artorius Collbrande's son. When she fell into the cape of Aball's altar, she was reincarnated as Seres, and the child, as Laphicet himself. When he confronts Velvet with this technicality, Laphicet is reminded that who he chooses to be is what is important, not who he used to be. After Velvet kills Artorius and seals Innominat along with herself, Laphicet becomes the dragon Maotelus so that he, along with the four reincarnated praetor exorcists, can protect the world from malevolence, but this also causes humans to lose the ability to see the malakhim.

Laphicet appears as a young child in pale, innocent colors. He has green eyes and blonde hair, with a swirl on top representing a halo. He wears a white cloak, a short blue cape, long black socks, black shoes, and a large black choker with a yellow jewel. His white and blue contrasts strongly with Velvet's black and red. Laphicet initially appears shy and withdrawn due to his enslavement to exorcists, obediently following any order he is given, even if it kills him. But after interacting with the rest of the party, he eventually develops his own sense of self and ability to smile. He soon becomes close with Velvet, determined to protect her. He loves studying new things and reading. As the youngest member of the party, Laphicet idolizes both Eizen and Rokurou, who each on their own way encourage Laphicet to live his own life, becoming his own person, different from the both of them. He is also kindhearted with a strong sense of justice, willing to help his friends and fight those who have wronged them, such as when he invited Kamoana into the group, and promised to clobber Innominat for breaking Velvet's heart.

Laphicet battles using paper sheets, similarly to Lailah from Tales of Zestiria. He can use hidden artes to corral his opponents at a slight distance to attack enemies with elemental attacks via mana-imbued papers, but his specialty is in his malak artes, which consist mainly of non-elemental artes. He is not good at close combat and proper movement and positioning is needed to prevent him being surrounded by his enemies. Laphicet's Break Soul is Divide Pain, which expands a field that halves damage received while healing his allies. His mystic artes are Binding Order, which entraps his target in a magical cage before he blows them away, Chaos Bloom, and Indignation. He also shares a dual mystic arte with Velvet known as Innumerable Wounds.

In Tales of the Rays, Laphicet appears as a stray nexus created from the mysterious non-sanctioned exoflection of his world, with he and his companions being exoflected before their final battle against Artorius and Innominat. Together with Velvet, they live in an isolated cabin in the forest. While travelling in the nearby village, he encounters Ix Nieves, Mileena Weiss, Sorey, Mikleo, and Edna while trying to get away from a merchant and his thugs. While speaking with them, he learns that he has been exoflected to another world. He also gets confused when Sorey and Mikleo refer to him as a seraphim. While speaking with Edna, he feels like he had seen her somewhere before.

After learning her name, he realizes that she's Eizen's sister. While Sorey and Mikleo split from the group to find information about the shimmera glass, Laphicet takes Ix, Mileena, and Edna to meet Velvet. While speaking with the group, Laphicet and Velvet learn that not only were they exoflected from a different world, but that they and Edna were exoflected from different points in time, with the Edna before them being from the distant future of their world. Now knowing that humans and malakhim are not endangered by malevolence in Tir Na Nog, Laphicet desires to give Velvet the chance at a peaceful life by living with her in the exoflected Aball. Velvet is uncertain, but agrees to go see the village. Along the way, the party reunites with Sorey and Mikleo, who quickly become apprehensive, believing Velvet to be the hellion who attacked them and is currently hunting Ix and Mileena while leaving destruction in her path, especially when Sorey reveals that he is a Shepherd from his time. Thinking he was just another one of Artorius' zealots, and that Mikleo was his tethered malak, Velvet reveals she is the Lord of Calamity from her time. Edna manages to clear up the misunderstanding, but then the true culprit appears.

Another Velvet is revealed to have been exoflected by Phantom, summoned after she learned the truth about Innominat and the second Scarlet Night, but before Laphicet restored her sanity. Now fully succumbed to despair, the alternate Velvet seeks to kill Ix and Mileena under the false promise that she can return to her world and kill Artorius.

In order to defeat her other self without endangering civilians, Velvet has the party recreate the Meirchio incident in Aball. When given the choice to pick which Velvet to side with, Laphicet sides with the future Velvet, who taught him how to live. When Sorey fails to reason with and later purify the Vengeance Demon, Velvet takes responsibility and devours her. With no place to return to and refusing the Shepherd's offer to clear up the villagers' misconceptions, Velvet resolves to help Ix and Mileena on their quest until her time comes. Since he is a Shepherd, Velvet asks Sorey a question, concerning the "many over the individual" policy Artorius adopted. Sorey responds that he would "choose the individuals so [he would] end up with the many."

While Velvet decides to join Ix and the others, Laphicet decides to stay on the continent for a bit longer. While speaking with Edna in private, he reveals that he plans to look for Eizen, having discovered one of his gloves.

In Tales of Crestoria, Laphicet was taken in and raised by an adventurer, along with Presea Combatir and Alicia Combatir. After a while, Laphicet's "Uncle" left the three in Kio to take care of each other. Suddenly, Presea suffered a terrible accident that prevented her from cutting more trees. The medicine needed was too expensive for working in Kio. So Alicia resorted to traveling to the city to find higher paying work while Laphicet stayed behind to tend to Presea's wounds. Alicia worked day and night at a nobleman's mansion to earn enough money to buy the medicine needed for her sister. And it all went along smoothly. But while she was working, Alicia caught the eye of the nobleman's son, who wanted to marry her. He could not take no for an answer, so he abducted Alicia and locked her away. The details for the rest of the story are currently unknown, but Alicia killed the nobleman's son and escaped. When the residents of the city learned of this, they showed the son's corpse to Vision Central and sealed Alicia's fate when her vision orb transformed into a Stain of Guilt on her arm. Desperate to save her sister's life, Presea resorted to cutting Alicia's stained arm off. Unfortunately, this only made things worse, and transformed her into an incarnation.

One day, Laphicet finds a woman in black fighting a bunch of monsters, who falls down a cliff. Laphicet rescues her and takes her to Kio.

The woman wakes up and introduces herself as Velvet Crowe. Fully healed, Velvet follows Laphicet, outside and Laphicet introduces her to the rest of Kio. As Velvet and Laphicet go out into the forest to regain Velvet's strength, the villagers warn the two not to approach Pasedy Mine. During their rounds, Laphicet reveals that he was the noise Velvet heard before she fell down the cliff. He also opens up to her, telling his backstory. How Laphicet talks about his "Uncle" reminds Velvet of how her brother, who shared Laphicet's name, wanted to go out on adventures too.

Suddenly, Velvet's arm senses an incarnation and rushes toward the direction, and stumbles upon the very Pasedy Mine she and Laphicet were strictly forbidden from entering. Presea shows up. Velvet tells her to stand aside so she can kill the incarnation, but Presea refuses, and fights Velvet. After the fight ends in a draw, Presea reveals that her sister, Alicia, is in there. To protect Alicia, Presea destroys the entrance into the mine, preventing Velvet’s approach. A group of monsters appear from another opening leading into the mine. Velvet cuts a path through, allowing her and Laphicet to escape.

Arriving back at Kio, Velvet informs the villagers about the incarnation and asks for their help in reopening the mine. The villagers refuse, saying that “whatever Presea says goes.” Velvet reluctantly decides not to involve herself with someone else’s affairs and leaves.

Laphicet catches up and explains his backstory with the Combatir sisters. Laphicet wonders if Presea's spirit was still alive in the incarnation she was absorbed into, since it seemed very tame around Presea, and theorizes that Velvet's arm could be the key to separating Alicia from her incarnation, though neither of them know how it would work. Velvet refuses, stating that if Laphicet's plan fails, Presea's mental condition would worsen. Laphicet is ready to bear his sin, if it comes to it.

After reaching the caved-in entrance, they come across Caius, who is looking for a girl named Rubia, and Norma, who is looking for treasure. The two newcomers manage to help Velvet and Laphicet find another entrance into the mine, where Velvet senses the presence of Alicia's incarnation. Laphicet tries to reach out to Alicia, but Velvet intervenes, saying that Alicia is no more. Then, the incarnation starts crashing into the walls, causing the cave to quake. The group follows the incarnation outside the mine, toward Kio. Laphicet tries to stop Velvet from killing Alicia, but to no avail. Velvet consumes the incarnation. Presea arrives at the scene and is filled with rage. As the two fought, Velvet acknowledges Presea's right for revenge before the latter faints from exhaustion.

Back at Laphicet's room, Laphicet is tending to both Velvet and Presea's wounds when Norma and Caius barge in to give them a letter the incarnation dropped. 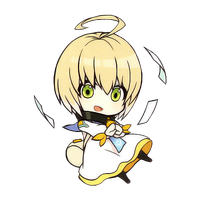