Aselia Wiki
Register
Don't have an account?
Sign In
Advertisement
in: Largo, Tales of the Abyss characters, Major Antagonists
English

Largo the Black Lion (黒獅子ラルゴ, Kurojishi Rarugo?), once known as Badaq Oakland, the Lion of the Desert (バダック・オークランド、砂漠の獅子王, Badakku Okurando, Sabaku no Shishiou?, "Badaq Oakland, the Lion King of the Desert"), is a major antagonist in Tales of the Abyss and one of the six God-Generals. He is the 1st Division Commander and leader of the shock troops in the Oracle Knights.

Badaq was born in Baticul in N.D. 1969 and eventually became a mercenary guarding caravans traveling to the merchant city of Chesedonia. In N.D. 1997, he married Sylvia Oakland, who later took his name, on Gnome-Redecan 35. Two years later, in N.D. 1999, Sylvia gave birth to Meryl Oakland, who was later swapped with the princess of Kimlasca, Natalia Luzu Kimlasca-Lanvaldear, daughter of King Ingobert VI and Olivia Kimlasca-Lanvaldear. Sylvia's mother, Maggie, performed the replacement, which took place due to the true princess being stillborn, and afterward, Meryl would be known as "Natalia". This change was foretold in the Score. Distraught, Sylvia threw herself in Baticul's harbor and drowned. A few days later, Badaq barged into the castle in an attempt to take his daughter back, but he was arrested and exiled. He wandered Auldrant until he met Van Grants, who convinced him to join forces by denouncing the Score.

Largo first appears during the assault on the Tartarus, where he is nearly killed by Jade Curtiss, miraculously surviving a grave spear wound after inflicting Jade with a Fon Slot Seal. Largo fights the group alongside Sync at the Zao Ruins and with Legretta and Arietta on Mt. Roneal. An avalanche occurs due to the fight on Mt. Roneal, and the Oracle trio falls into the ravine, but saved by Arietta's monsters. During the fall, Largo loses a locket, which Luke fon Fabre later finds. Afterward, Largo serves as the mediator in the duel between Arietta and Anise Tatlin in the Cheagle Woods. When Arietta dies, Largo carries her body away, telling Anise not to mourn for her enemies and that he will enact revenge for Arietta's sake. Luke then throws the locket he found on Mt. Roneal to Largo, beckoning him to reveal his true identity. However, Largo declines and retreats.

Largo reappears as the emissary of the New Order of Lorelei to the Kingdom of Kimlasca, attempting to persuade the King Ingobert VI to join the New Order. He also confirms that he is Natalia's true father, but that he has lost faith in having any sort of paternal relationship. The group fights Largo one last time at the Absorption Gate after he allows the revived Van to escape. Upon defeat, Largo rushes to take Luke with him, but he is fatally wounded by one of Natalia's arrows. Luke then asks Largo why the God-Generals are cooperating with Van when they both want the same thing: a world free from the Score's influence.

Largo tells Luke that, despite their goal being the same, their beliefs on how to achieve this goal are different. Van believes the world should be destroyed and replaced by one with replicas, while Luke and his companions believe people can begin anew, and that there is no need for a replica world. Afterward, Largo warns Luke not to show mercy to his enemies or else he will never defeat Van. He bids farewell to his daughter as he dies, calling her by her real name, which causes Natalia to acknowledge him as her father. Largo's body is then engulfed in light, and he vanishes as his fonons separate. 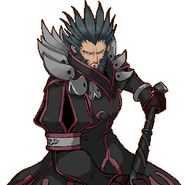 First cut-in image for Brimstone Tempest in Tales of the Abyss. 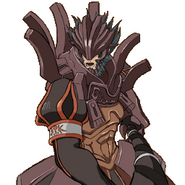 Second cut-in image for Brimstone Tempest in Tales of the Abyss. 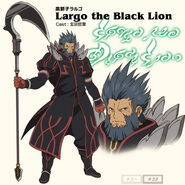 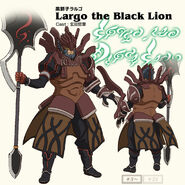