Lazaris (ラザリス, Razarisu?) is the primary antagonist and final boss in Tales of the World: Radiant Mythology 3. She masquerades as the Descender of Luminasia, when she is actually Jildia's equivalent of a Descender.

Lazaris is a pale-skinned girl with red eyes and white hair dipped with red. She wears a crystal over her left eye that she uses as a ranged weapon, and her attire is a dress decorated with purple crystals. Lazaris longs for Jildia, which is her own world, to be born, even though it involves destroying Luminasia. She goes so far as to acknowledge that her wish is a selfish one, but justifies it through reasoning that Luminasia essentially denied Jildia the opportunity to be born as a world.

In her Chaos Lazaris (カオスラザリス?) form, her arms become crystaline blades while her lower body becomes a giant, sphere-shaped base with three razor shurikens on the bottom. In this form, Lazaris's voice becomes warped and louder.

Each of Lazaris's strike artes are completely original, reflecting on negative aspects, and only has two magic artes: Holy Lance and Divine Saber. Chaos Lazaris trades the magic casting for an arteset solely on strike artes while her Lazaris Stem minions focus solely on the magic artes for her. She also gains the mystic arte Sekaisouzou no Melt. 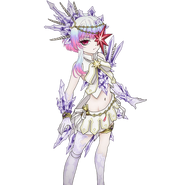 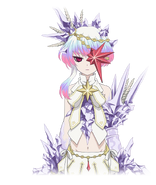 Artwork for Tales of the Rays.