The Legacy (遺跡船, Isekisen?, "Ship of Historical Ruins") is an immense ship that serves as the setting of Tales of Legendia. The Legacy mimics a floating landmass the size of a small continent, on which a monarchy known as the Kingdom of Terises once flourished, creating advanced technologies and nightmarishly-powerful weapons, such as the Nerifes Cannon and Wings of Light. The Legacy now drifts aimlessly on the oceans, populated by both Ferines and Orerines, as well as overrun with monsters. Throughout the course of the story, the Legacy is under the domain of the Holy Rexalian Empire by virtue of the only sizable Orerines settlement, Werites Beacon.

The Legacy has few settlements but a vast number of dungeons. The ship's architecture features ancient designs sculpted by the Ferines' ancestors, and water carves throughout its infrastructure. Abundant in hills, mountains, forests, and lush greenery, the ship is indistinguishable from a typical continent, particularly due to its massive size. The Legacy is shaped in the same manner as a ship, with its northern tip carved in an arrow-like fashion. The landmass is split by the Inland Sea, which forms a large circle of water in the center and connects to the surrounding ocean. The sea has a small bay, properly named Inland Bay, which sits just southeast of Werites Beacon.

The Kingdom of Terises was once an immense, flourishing civilization that existed on the Legacy. Its people worshiped the sea, which they called Nerifes, and spoke the ancient language Relares, which is still spoken today by their descendants, the Ferines. The Kingdom's leader was known as the Merines and was chosen by the divine will of the sea. He or she sat court in the capital of Terises, the Mirage Palace. The people of Terises were credited for building many enormous, fantastic artifacts, including the Nerifes Cannon, the Wings of Light, and even the entire Legacy itself, but little is currently known about them or how they lived.

According to the records kept within the four elemental monuments of the Quiet Lands, the Kingdom of Terises was formed when the Orerines first arrived on the planet, descending from the sky in a great white, rectangular ship. The Ferines and the Orerines went to war against each other, and the Ferines lost, forcing them to withdraw onto their ship, which they terraformed into an immense moving island, the Legacy, using the power of Nerifes.

The original form of the Legacy.

The Legacy arriving at Shining Blue. 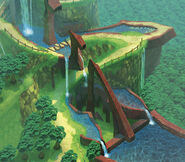 A depiction of the Legacy's landscape.
v • e • d
Locations of Shining Blue (Tales of Legendia)
Community content is available under CC-BY-SA unless otherwise noted.
Advertisement