"Regret" redirects here. For the martial arte used by Dezel and Zaveid in Tales of Zestiria, see Regretful Thrust.

Legretta the Quick (魔弾のリグレット, Madan no Riguretto?, "Magic Bullet Regret"), birth name Giselle Oslo (ジゼル・オスロー, Jizeru Osuro?), is a God-General and major antagonist in Tales of the Abyss who once taught Tear Grants. She is the 4th Division Commander within the Oracle Knights. Legretta is one of the most trusted subordinates of Van Grants, despite originally planning to kill him by means of training Tear. She is shown carrying out his most intricate operations and occasionally gives commands to the other God-Generals, serving specifically as Adjutant Commandant.

Prior to the events of the story, Legretta's younger brother, Marcel Oslo, who admired Van, died in the Battle of Northern Chesedonia in N.D. 2015. Sometime later that year, Van became Commandant of the Oracle Knights, and Legretta investigated the Closed Score only to discover that Van sent his troops to fight in the Battle of Northern Chesedonia, knowing they would lose. Knowing that Van willingly sent her brother to die, Legretta attempted to kill him out of hatred, but seeing that she too rejected the Score, Van promoted her to his personal aide. She then changed her name from "Giselle" to "Legretta".

The next year, in N.D. 2016, Legretta taught Tear, who followed the Oracle Military Academy's program, which lasted about six months. During this training, Tear was framed by a fellow trainee named Sein for killing a pet rappig, but Legretta discovered the true culprit and cleared Tear's name. One day during practice, Legretta was nearly assassinated by the reformist faction. She then began to consider making Ion leader of the reformists. Although Tear was first defiant toward Legretta, she came to admire her and refer to her as "Major Legretta". As Legretta trained Tear, she learned more of Van's past and began to feel attracted to him. Upon finishing Tear's training, Legretta threw away her past and desire for vengeance against Van, truly becoming his subordinate.

Sometime after these events, but still prior to the events of the story, Legretta was promoted from Major to God-General. She believed in Van's ideals of rejecting the Score, which she began to feel took her brother away, as opposed to Van doing so. She despised how the Score held a firm grip on people's lives, dictating their actions and feelings, and began to wonder whether she herself was nothing more than a puppet being controlled by the same. Legretta later speaks specifically about how she refused to allow the Score control her emotions, as well as that the will of the people should be their own.

Over time, Legretta begins to fall in love with Van, devoting herself completely to his ambitions. She slowly loses faith in the current state of Auldrant and the people living on it, even leading a massacre at Sheridan, giving little thought to killing innocent civilians in the city and specifically stating that their deaths are the result of them interfering where they do not belong. Holding firmly to Van's vision, she as well wishes to destroy the current world and create a replica one in its place, finally ending the Score's reign over human's lives, thoughts, and emotions. Legretta places her faith in Van, knowing that she would die for him if the time ever came.

The only other person in the story Legretta shows sentiment toward is Tear. Being her former instructor, she shares a close bond with Tear, usually attempting to convert her to their side whenever they encounter. Tear adamantly refuses, claiming she does not trust her brother. Legretta is hesitant to fight Tear many times, but as the story progresses, she becomes more aggressive, as she realizes that Tear's beliefs interfere with Van's, as well as that converting her is futile. She fights the group a total of three times, each time granting the group a less-than-friendly greeting by firing a bullet at their feet. The first time she is fought is at the end of Deo Pass, before the group reaches Akzeriuth. Once defeated, she calls Luke fon Fabre a "reject", giving him a clue as to exactly what he is, and informs Jade Curtiss about fomicry being revived.

The second time Legretta fights the group is on Mt. Roneal, alongside fellow God-Generals, Largo and Arietta. She again tries to convert Tear, but to no avail. When defeated, she and her two companions are hurled into the ravine of the mountain by an avalanche that was caused from the fight. The Oracle trio is seemingly killed, but later revealed to be alive, rescued by Arietta's monsters. Legretta then pursues Asch, demanding he hand over the Key of Lorelei, upholding Van's wishes even after his apparent death. The third and final time the group fights Legretta is shortly after they arrive in Eldrant. Upon being met by her usual shot, she reveals herself and admits her desire to destroy the world plagued by the Score, even if it means creating a replica world in its place. Legretta is defeated one last time, stating that even though Tear may think she sacrificed herself for nothing, people do not lay down their lives for nothing. She confesses her feelings for Van and his vision to Tear, claiming she died fighting for what she truly believes is right, as well as the man she loved. She dies praying for Van to reform the twisted world ruled by the Score.

Legretta is a woman of about Tear's height who dresses in the standard black Order of Lorelei clothing, similar to Tear's standard outfit. She has long, blond hair that is pulled back into a ragged ponytail and a long, red piece of cloth that drapes around her arms and trails down her back. Legretta usually carries her two fon-tech handguns behind her back, but she is able to draw them quickly when necessary. Like the other God-Generals, Legretta changes uniform toward the end of the story. She retains her black clothing but adds a white, metallic mantle around her chest, with the red cloth now replaced by the same metallic substance, resembling a flowing appearance.

Legretta has a staccatoed voice and tends to speak loudly when she is prepared to attack. However, when speaking with Tear, Van, or the other God-Generals, her voice is more gentle, masking her formidable fighting skill. Being a soldier, Legretta is intelligent, calculating, and dangerous. She often speaks calmly and is very persuasive when it comes to negotiation and explaining her beliefs to others. Legretta remains loyal to Van alone, fulfilling her orders at all times, regardless of how grisly they may be.

While it may seem obvious Legretta possesses emotions and reveals them near death, she is excellent at covering her true feelings to the group. In this regard, she is even more similar to Tear, coming across as an efficient, emotionless soldier in order to maintain respect. She taught Tear that only poor soldiers allow people to see what they feel outright, so Tear's commitment to not cry or appear frightened under any circumstances is by Legretta's resolve. Despite the revelation of Van being Legretta's love interest, Legretta does not allow her emotions to inhibit her priorities, eliminating the emotional female stereotype. Her status as one of the most powerful female antagonists in the story greatly overshadows her inner feelings and vulnerability.

Legretta is competent in both physical and magical forms of attack. She wields dual, fon-tech guns that never visually require reloading, and she is able to perform effective and damaging combos from a safe distance. Agile in battle, Legretta is able to cross the battlefield swiftly and pursue her targets with relative ease. She has a high physical defense statistic, but she is not particularly hard to stagger while casting spells. She can cast a multitude of Light-elemental fonic artes, including Eclair de Larmes and Holy Lance, as well as the high-level, Water-elemental fonic arte, Blessed Drops.

Legretta also possesses two special artes involving her unique weapons, the first being Rage Laser, which fires a penetrating beam of light from her guns, and her signature mystic arte, Prism Ballet, in which she surrounds herself with multiple walls of light and fires a larger, more powerful version of Rage Laser. Legretta is also resistant to Light-based fonic and strike artes. It is worth noting that she shares many artes with her student, Tear, including Eclair de Larmes, its FOF Change Flamme Rouge, Holy Lance, and even Resurrection on harder difficulties. Unlike Tear, however, Legretta has the ability to use certain arcane strike artes without the use of an FOF Circle, namely Inlay Nocturne and Searing Sorrow, both of which she also shares with Tear. 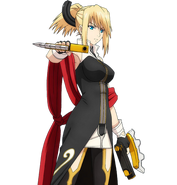