Leia Rolando (レイア・ロランド, Reia Rorando?) is a protagonist from Tales of Xillia. She is an apprentice nurse and childhood best friend of Jude Mathis. Leia is employed at a clinic owned by Jude's family in his hometown of Leronde, and she also works as the "poster girl" for her family's inn.

After Jude and Milla Maxwell return to his hometown of Leronde, they meet Leia. Leia joins them to search for a valuable ore that is needed to heal Milla's legs, which were severely injured in the fight with Nachtigal I. Fenn. After healing Milla, Leia decides to join the party without telling her family, seeing Milla as a role model and wanting to change herself to become a stronger person.

Leia is a young, 15-year-old girl with short brown hair covered by a white headband, which she describes as her "number-one favorite", and green eyes. Her outfit consists of a white dress with yellow markings and two pieces of fabric hanging from the shoulders, as well as small brown boots. In Tales of Xillia 2, she wears a white shirt covered by a yellow coat with a blue scarf around her neck. She also wears a black cap on her head, brown shorts and black and white tights that stop about halfway above her thighs.

Leia is bright in her appearance and personality, striving to please everyone around her with her positive attitude. Her kind demeanor and cute appearance contrasts sharply with her rabid love of sports and fighting competitions, though she values effort over victory. Like Jude, she is inspired by Milla's great strength and becomes driven by a desire to become as strong as her. She is also quite sarcastic at times, especially to Jude, a trait she is implied to have had since she was young.

Leia was sick and frail when she was younger, and her mother proposed she spar with Jude to gain back some of her strength, which Milla originally misinterprets as "bullying". She decided to become a nurse at the Mathis family's clinic to become closer to Jude. In Tales of Xillia 2, Leia discontinues her job as a nurse and instead works as a newspaper journalist in Elympios. In a skit, Alvin states that Leia likes to use emoticons and smileys in her messages, which make her messages seem more like codes.

Leia uses staves as her weapon. Her primary stat for her Lilium Orb is Stamina, even though her total Stamina stat is not significantly higher than others. She also has relatively high Agility, only beaten by Jude, allowing her to move quickly in battle. Her characteristic skill is "Elongating Staff" (活伸棍術, Kasshinkonjutsu?, "Life-Extending Staff Magic") which is activated when Leia successfully dodges an attack using the back step motion. Her staff then turns white and becomes extended, enlarging her range and attack power for a small duration. Leia has skills available to improve the duration of staff expansion, as well as one to enable the skill upon Flash Guarding an attack. Leia's artes have a focus towards aerial combat. All but one of her attacking artes and her arcane arte have aerial enabled, and many cause her to become airborne after use.

Being an apprentice nurse, Leia has access to magic that consists primarily of single target healing and support spells. Leia's Elemental Impulse is the only way to enable elemental damage on a weapon with no element. Leia's partner characteristic support skill is "Item Steal" (アイテムスティール, Aitemusutiiru?). While Leia is the secondary partner, if the primary partner is attacking a downed enemy, she has a chance to attempt to steal an item. Leia is best used against Strange-type monsters in Tales of Xillia due to the fact that the items they possess are valuable for shop expansion, though she can also steal items from enemies of all types. In Tales of Xillia 2, Leia's partner skill works best with Magic-type enemies. Leia's arcane arte, Soulstoke Spin, activates her mystic arte under specific circumstances.

Appearances in Other Media

Leia appears in Tales of Crestoria's Limited Quest: A Green and Swarmy Night. Leia runs an inn owned by her family. She currently has Raven, Vicious and Aegis Alver in debt. Raven came in for a place to stay, but is "waiting for the right opportunity to take action." Vicious and Aegis are working to pay off a debt for Vicious drinking a few bottles he couldn't even pay for. 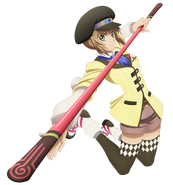 Cut-in image for Earthcracker in Tales of Xillia 2.