Leon Magnus (リオン・マグナス, Rion Magunasu?, "Lion Magnus"), birth name Emilio Katrea, is a character from Tales of Destiny. A cold-hearted, brooding young prodigy of a swordsman from Seinegald, Leon is the youngest master swordsman to become a captain of the Kingdom of Seinegald. He is closely associated with Hugo Gilchrist and lives in his manor located in the city of Darilsheid. Although he shows a cold exterior to his associates, he opens up to a maid in Hugo's house named Marian Fustel. He is also the master of the Swordian of Earth, Chaltier.

Leon was born Emilio Katrea, the second child of Hugo Gilchrist, President of the Oberon Corporation, and his wife, Chris Katrea. He also has an older sister named Rutee Katrea, who is two years his senior. During his childhood, Leon was attached to a girl named Marian. The family also had Swordians in their possessions, namely Atwight, the Swordian of Water, and Chaltier, the Swordian of Earth. Emilio received Chaltier and became his master. One day, Hugo came upon a Swordian named Berselius, possessed with the soul of Kronos, leader of the Aetherians. Hugo, whose mind was being taken over by Kronos, was slowly losing his sanity and managed to kill Chris. 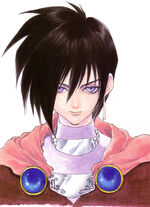 However, before he completely lost his mind, he sent Rutee along with Atwight away somewhere in order to protect her. However, he was totally consumed by insanity before he could save Emilio. In turn, he trained Emilio to be a cold-hearted warrior and had him change his name to "Leon Magnus". Leon utterly despised his father, but had to follow Hugo's orders, as he brought Marian, with whom Leon was greatly infatuated due to her resemblance to Chris, to his house as a maid and threatened her life should Leon do anything bad. As he trained, he showed great swordsmanship and discipline and due to Hugo's association with the kingdom of Seinegald, Leon soon was promoted to the position of Knight Captain of the kingdom.

Hunt for the Eye of Atamoni

While serving the kingdom, eventually Leon hears about Rutee, who is currently a Lens Hunter, and her money-hungry attitude, which grants her a bad reputation. Eventually Leon catches up with her along with her usual partner, Mary Argent, and her new partner, Stahn Aileron. Even though he recognizes her as his sister, Leon pretends not to know her and quickly decimates and arrests her group. Leon also notices that Stahn possesses the Swordian of Fire, Dymlos. Leon proceeds to confiscate their weapons and send them to the dungeon. However, they are later freed by Hugo so they can be used to investigate the disappearance of a huge, powerful Lens named Eye of Atamoni from the Straylize Temple. Leon is assigned to accompany them so they will not do anything disloyal, much to his chagrin, although three electric tiaras are also put on their heads. After escorting them to his house and giving them their weapons back, Leon has a brief talk with Marian before leaving. During the journey, he has to show a lot of his authority to control Stahn and the others.

Eventually they find out that the Eye of Atamoni was stolen by the High Priest Lydon Bernhardt himself. Joined by a priestess from the temple, Philia Felice, who later received the Swordian of Lightning, Clemente, Leon sets out to hunt down Lydon, first by heading to Calvalese and contacting Baruk Songram, the Branch Manager of Oberon Corporation. Lydon had visited the region, but had already left to Fitzgald. Leon then gets his group heading to the city of Neuestadt, contacting the Branch Manager Ilene Rembrandt and eventually agreeing to capture a suspicious group of Lens Pirates.

The team succeeds in capturing their leader, Philia's former friend, Batista Diego. To interrogate Batista, Leon takes Mary's tiara and put it on Batista's head, much to Rutee's dismay; she wants to be free of her tiara. Leon does not trust her much, and when she calls him a "snot-nosed brat", he is greatly insulted and proceeded to shock her. Eventually, after Batista faints and has not revealed any information, Leon leaves him in the room with the door purposefully unlocked. As he expects, Batista escapes and the tiara, which is equipped with a homing beacon, broadcasts his location, the region of Aquaveil.

Leon heads there and confronts Batista in the town of Moreau. Batista eventually commits suicide by pulling off the tiara, shocking him to death. When Philia is mourning his death, Leon tells Stahn to go, asking whether he still has the tact or decency to respect her moment of sorrow. They later confront Lydon and King Tiberius Terazzi in Terazzi. Although Tiberius is defeated, Lydon escapes to the snowy region of Phandaria. Tiberius knows he is being used by Lydon, but when he hears the word "Seinegald", he begins rambling that it would soon follow his footsteps, being destroyed by Lydon and the Eye of Atamoni.

Unable to withstand hearing his country being insulted, Leon kills the tyrannical king. However, he also recognizes Karyl Sheeden's will to avenge his parents, and thus Leon apologizes for snatching Karyl's chance to extract his revenge personally. They then travel to Phandaria. Helped by prince Garr Kelvin, the group defeats Lydon. However, the Eye of Atamoni's power is running wild. Leon then puts a special disc on each Swordian that causes them to enter a dormant state, and the Eye calms down. The mission is a success, and Leon reports the mission's results to the King and returns home.

The disc, however, is a ploy by Hugo to lure everyone into a false sense of security. When nobody suspects it, he uses the Oberon Corporation members and Leon to steal the Eye of Atamoni once more in order to bring back the floating continent, Aethersphere, which was sunken centuries ago, where he would resume his plan for world domination. At first, Leon is reluctant to help, but Hugo once again uses Marian to threaten and coax him to his side. Stahn eventually learns about this and pursues Hugo to an abandoned mine below a factory named Libra IV. Just before they catch up to him, Hugo sends Leon to hold them at bay. Leon consciously accepts the task and starts to antagonize Stahn and his friends, all in order to protect Marian. He also reveals his relationship with Rutee, but attacks them nonetheless, betraying the group he worked with. Eventually, Leon is defeated.

In the original Tales of Destiny, as they fight, the mine is flooded with water, washing Stahn and his group away, while Leon stays behind on the only remaining piece of land, too injured to move on. He gives a last laugh and farewell to Marian before dying. In the story's PlayStation 2 remake, Leon sends Stahn away through an elevator as his injuries prevent him from joining them. Also, he mentions that someone has to stay behind to operate the elevator. As the mine starts to be flooded with water, he apologizes to Chaltier for bringing him into all this, though the Swordian does not mind. Nonetheless, Leon is killed. During Stahn's final confrontation with Kronos, the latter conjures a zombie in form of Leon for them to fight against. Stahn and his group emerge victorious, defeats Kronos, and shortly after saved the world.

In the original PlayStation version of Tales of Destiny, Leon fights using a sword and shield, capable of wielding any of the Swordians, excluding Igtenos. Leon's fighting style represents a mix between the abilities of Stahn and Rutee, sharing some of the same physical artes and movements. This style continued through all of his appearances until the release of the PlayStation 2 remake of Tales of Destiny. In this incarnation, Leon now fights while wielding Chaltier and a dagger in opposing hands.

Leon can no longer exchange Chaltier for another Swordian, but Chaltier retains the same Earth- and Dark-elemental spells that he had in the original game, granting those abilities to Leon himself. Furthermore, Leon's fighting style has been modified to separate him from Stahn and Rutee's abilities in battle, granting him with the capability to extend several of his artes, and also providing different animation options for certain attacks via using a dagger alongside Chaltier for a dual-wielding style; this along with several artes associated with Judas in Tales of Destiny 2 are given to him, provides him with a more varied balance of slash and thrust attacks. This current iteration of Leon's abilities is now considered to be his standard fighting style, continuing with him into all later spin-offs and cameo appearances.

In the "Unknown" difficulty of the PlayStation Portable port of Tales of Destiny 2, it is possible to fight a manifestation of Leon's spirit that was inhabiting Chaltier. He has access to several spells and strike artes of his remake move set, but he is more known for his two mystic artes: Jouha Messhouen, which he uses as an extension to Funjin Reppashou, as Judas does, and Majin Rengokusatsu, which is his response to a mystic arte being used on him.

Leon's outfit appears as a DLC costume for Asbel Lhant in Tales of Graces ƒ. When his costume is equipped, the battle theme changes to an arrangement of "Lion ~Fate of a Fencer~", the battle theme that is used for the "Leon's Side" storyline of Tales of Destiny: Director's Cut. The victory theme changes to another remix of the same song, which is currently exclusive to Tales of Graces.

Leon appears in the second half of the game to help Julio Sven, Caro Orange, and Rutee against his fake in the Skyborn Necropolis. He is also available as a costume for Julio by combining Julio's Demonic Swordsman costume with the Star Glove root item.

Leon appears in Tales of the World: Radiant Mythology as a playable character with his battle theme, "Lion – Irony of Fate". He is classed as a Magic Knight with the title of "Sword Prodigy". In the beginning, he is very hostile toward the Protagonist and Mormo, but when they help him to take revenge on a node of the Devourer that destroyed his homeland, he begins to open up to them, and gives them advice every now and then. Through a Trial Quest, it is possible to fight Leon in the Weald. It is also possible to fight with together with Stahn or Rutee, and eventually both.

Opening still from Tales of Destiny. 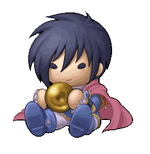