Lilith Aileron (リリス・エルロン, Ririsu Eruron?) is a supporting character in Tales of Destiny. Although she is not officially playable in the original game, Lilith achieves fully playable status as an optional party member in the PlayStation 2 remake of the game. She is the younger sister of Stahn Aileron, who is very concerned about him and wishes he would not go on such dangerous adventures.

After the events in Phandaria and the collapse of Lydon Bernhardt's scheme to control the Eye of Atamoni, the companions who followed Stahn on his journey each returned to their own homes, believing that they had just saved the world from a madman. Stahn returns to his home village of Lienea, where his only remaining family, his sister Lilith and their grandfather, Thomas Aileron (トーマス・エルロン, Toomasu Eruron?), live in the peaceful atmosphere of a location so distant from the political troubles which affect most of the world, troubles which Lilith could not imagine due to her isolated view of life. Upon reaching the village, however, Stahn muses that bad things are certain to happen to him after having disappeared from the village so long ago to begin his life as an adventurer.

One morning, three months after his return, Lilith attempts to wake Stahn from his deep slumber so that they could have their breakfast. But due to his sleeping habits, Stahn cannot be awakened, and he merely snores at Lilith's attempts to wake him. Finally, Lilith decides to use a "secret technique" which belongs to the Aileron family, the arte Shisha no Mezame. Lilith repeatedly bangs together a pan and ladle, creating a loud noise that could wake the dead, and Stahn is startled out of his slumber. Lilith scolds him for oversleeping for the past ten days straight, imploring him to think of her efforts in cooking his meals in the morning only for the food to get cold by the time he wakes up. Stahn apologizes for staying asleep for so long and asks Lilith to be more gentle from now on, and she merely grins.

Lilith is briefly involved in the story of Tales of Destiny 2, as the party briefly visits her after battling a large creature which attacked the Aigernon, the ship they were riding in order for them to reach Frostheim. Due to that incident, the hull was pierced by the creature, causing the ship to start sinking, but Reala used her powers to lift the ship into the air, allowing it to float to the nearest shore. Due to the effort required to lift such a large vessel, Reala collapses unconscious and the party goes to the nearby village of Lienea to find a place for her to rest while the Aigernon undergoes repairs at the harbor of Neuestadt. Kyle Dunamis realizes that Lienea is the village where his father Stahn grew up, and he becomes excited to meet his aunt Lilith for the first time in order to learn more about his father's youth.

Lilith is surprised to see the party at her doorstep, and after listening to their story, she allows the group to stay and rest in her house. Since the village is usually calm and peaceful, she says that a bit of trouble would make things more interesting, and she states this to be the reason that Stahn left on his initial adventure, to escape such a boring life. Kyle asks her about his father, and Lilith starts to complain about having to wake him up every day, usually resorting to a certain method that would wake the dead. Lilith goes on to say that Stahn always wanted to be a soldier within the army of Seinegald, and he never had any aspirations to become a hero, instead achieving that status without even realizing it. Kyle is shocked to learn that Stahn was not the kind of person he imagined him to be, but this motivated him more now that he is aware of how similar the two of them really are.

On the following morning, after almost everyone else has awakened, including Reala after recovering from the previous incident, Lilith sees that Kyle is the only one who remains asleep. With a sigh, she begins to demonstrate the technique she used to wake her brother years ago. Kyle wakes up somewhat disoriented, but after realizing what had happened on the previous day, Kyle rushes outside to speak to Reala. After their talk, they go inside to eat breakfast, and Lilith amusingly comments that Kyle, like Stahn, becomes so energetic whenever food is mentioned. Afterwards, the party gets ready to depart, and Lilith gives Kyle one of the swords that Stahn used during his journey, along with some vegetables. She invites them to visit anytime, and Kyle affirms that he will definitely return.

Although it is clear that Kyle meets Lilith for the first time in that visit, in the epilogue, a skit can be triggered in which Kyle now has visited her during his childhood within the fixed timeline. In the same skit, Loni Dunamis also shows interest in Lilith as a woman, only to have Kyle remark that she is married. When Kyle visits her during the epilogue, Lilith is shocked to see how much Kyle had grown, since they last saw each other when Kyle was 10-years-old.

Like her brother Stahn, Lilith has also started a family, marrying a fellow villager named Bacchus and having a child together, a daughter named Rimul Aileron. Although Rimul and Kyle are cousins, they never encounter each other until Kyle reaches the exhibition phase of the arena battles at Neuestadt, where Rimul is revealed to be the champion of the arena for some time after the retirement of Bruiser Khang. In addition to this battle, the PlayStation Portable port of Tales of Destiny 2 also adds new exhibition battles, one of which involves fighting Lilith using the abilities she has in the PlayStation remake of Tales of Destiny.

Lilith's battle capabilities consist of two very different styles, which were associated with her character during different eras of the series as a whole. The first derives from the original Tales of Destiny, in which Lilith could be made playable with the use of glitch or cheat methods, while the second started with the PlayStation 2 remake of the same game and has effectively replaced her fighting style in all subsequent appearances.

Originally, she was designed as a martial artist, capable of fighting either unarmed or using quarterstaves, which, in the original Tales of Destiny, were weapons that only Lilith and Philia Felice could equip. Due to Philia's status as a Swordian Master, the entire rod and staff subset of weapons could only be used effectively by Lilith, although she can fight without using a weapon, using unique animations for certain artes and movements when unarmed. During this earlier era, most of Lilith's artes were lightning-influenced, including artes such as Thunder Punch, from which the more well-known Lightning Blade is derived, and her signature Thunder Sword. Her fighting style was heavily inspired by Heihachi Mishima from the Tekken series, another Namco franchise, sharing her lightning affinity and the artes Thunder Punch and 10-Hit Combo with Heihachi.

This moveset is retained in her cameo appearance in the coliseum in the PlayStation version of Tales of Phantasia. She also gains Shikou Bakuraijin, the arte's first appearance well before its use as part of a playable movelist in Tales of the Abyss, and an exclusive arcane arte Raiga (雷牙?), where she performs two punches before a massive lightning-infused uppercut. In the original Tales of Phantasia: Narikiri Dungeon, Lilith also gains the use of Hououtenku, which, along with Thunder Sword, allows her to hit all three party members at once. Furthermore, her basic attack is animated as a chain of four punches, though damage is combined as a single hit. The Fighter costume branch's arte Bakuraijin is a reference to Lilith's Shikou Bakuraijin.

Lilith's moveset is drastically changed in the remake of Tales of Destiny, returning only with her Lilith Slash, an arte-based application of the basic attack chain which uses her ladle in Tales of Phantasia, and Thunder Sword, now upgraded to Blast Caliber status. Instead of the other artes which exhibited her martial prowess, she instead gains various goofy, cooking-oriented artes such as Manbou Senkou, a play off of Shishisenkou with a sunfish instead of a lion, as well as Shisha no Mezame, a battle application of her method of waking up her heavy-sleeping brother. This change in fighting style effectively replaces what she had been capable of in the past, and all of her appearances after this remake have used this new fighting style, starting with the cameo battle that was added to the PlayStation Portable port of Tales of Destiny 2, in which she fights Kyle using this new movelist.

Appearing in the PlayStation, Full Voice Edition, iOS, and Cross Edition releases of Tales of Phantasia, Lilith represents the first cameo battle to appear in the Tales series, starting a tradition of future exhibition battles in most later games. In Tales of Phantasia, she fights against Cress Albane, who would later appear as the cameo battle opponent in Tales of Eternia. Once defeated, she gives Cress the S&D sword, Stahn's signature weapon, and the ability to activate one of Stahn's strongest artes, Final Fury.

In Tales of Eternia, Lilith appears as Tastemaster, Farah Oersted's opponent in Chambard Bistro cooking contest. Upon defeating her three times, she will award Farah with the "Warrior Chef" title

In Tales of the World: Radiant Mythology 2, Lilith appears as a playable character with the other Tales of Destiny characters. She joins the crew during a quest to search for Stahn.

In Tales of the World: Radiant Mythology 3, Lilith can be unlocked by defeating her in the arena which is triggered randomly in an arena battle with Stahn in the party and watching the scene in Van Eltia with Stahn and Rutee Katrea after the fight. She is then able to join the party.

Artwork for Tales of the World: Radiant Mythology 3. 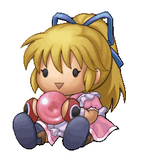