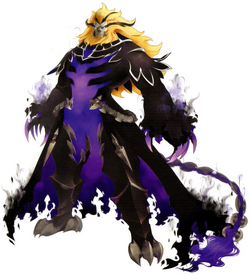 The Lord of Calamity (災禍の顕主, Saika no Kenshu?) are beings that appear in Tales of Zestiria and Tales of Berseria.

A Lord of Calamity acquires their power due to a curse of immortality, which causes them to accumulate far more grief, despair, and negative emotions than most humans are capable of in their lifetimes; however, it is known that there were other Lords of Calamity in the distant past, and so other means to achieve the power may exist. It is implied that a powerful enough Shepherd can take the Lord of Calamity's place, and being able to form a contract with a dragon, in the same way the Shepherd forms contract with his seraph Prime Lords and Sub Lords, may be a requirement.

There are two known Lords of Calamity. The first Lord of Calamity to exist is Velvet Crowe, protagonist of the distant prequel Tales of Berseria, and the other is Heldalf, who was cursed with immortality and misfortune by the previous Shepherd, Michael, who sacrificed a baby, Mikleo, on an altar to the seraph Maotelus. The curse also brought death to all those close to Heldalf, including his newborn son, who was seemingly transforming into a hellion before being put down by Heldalf. Heldalf only realized his true form as the Lord of Calamity when he attempted to commit suicide by throwing himself onto an active battlefield. Unable to be struck down, the surplus of negativity on the battlefield empowered him into his current, lion-like form.