Aselia Wiki
Register
Don't have an account?
Sign In
Advertisement
in: Lukius Bridges, Tales of the Tempest characters, Major Antagonists

Lukius is the leader of the priests that are seeking Pensients. He is the right-hand man of the Pope, his father Vincent Bridges, and his goal is to hunt and execute Leymon. His mask is a symbol of his position, and he is not allowed to show his bare face. Working for the Church as leader of the priests, it is his job to round up Leymon with his partner Rommy and take them to the capital city of Janna. However, he does not like what he is doing and, in truth, wants everybody to live in a fair world. Unfortunately, he believes that genocide is the best way to go about it.

When the protagonists defeat Lukius in the desert, his mask comes off, and his face is revealed for the first time. To everyone's amazement, he looks almost exactly the same as Caius Qualls. This is because the two of them are actually brothers, separated at birth and sent to live with different parents. Caius went to live with his mother, Melissa Bridges, a Leymon woman, while Lukius went to live with his father, the human Pope. After he reveals himself to the group, he calls Caius "big brother" instead of his name. Despite subjecting hundreds of Leymon to horrible deaths at the hands of the Pope, Lukius actually wants to create a world where everybody can live peacefully. However, he has to keep capturing them until his father has enough souls to cast Life Magic, a powerful magic that will liberate his friend Rommy.

The protagonists encounter Lukius in the Church's cathedral as they try to reach the Pope himself. Refusing to let them past him, Lukius fights the group one last time. Lukius loses and supposedly dies from his wounds. However, when the group returns after defeating the Pope, his body is gone. When they encounter Rommy for the last time on Mount Ayre, Lukius appears, injured but still alive. He helps the group by turning Rommy into her true form, a Spot. 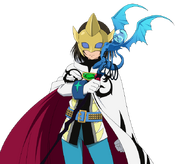