Lydon Bernhardt (グレバム・バーンハルト, Gurebamu Baanharuto?, "Greybum Bernhardt") is a major antagonist in Tales of Destiny whose actions stimulate the plot for a large portion of the game. He is the High Priest and Philia Felice's supervisor at the Straylize Temple in the Seinegald region until he steals the Eye of Atamoni kept in the temple and flees, leading the protagonists on a worldwide hunt for him.

Stealing the Eye of Atamoni

When the group visits the Straylize Temple at the behest of the King of Seinegald and Hugo Gilchrist, they arrive at the holy site to an eerie silence and the smell of blood. They rescue Bishop Ayles, who frantically attempts to explain the situation before Leon Magnus inquires about the Eye of Atamoni. Ayles refuses at first, citing the top secrecy of the powerful weapon, but Leon convinces him by means of a subtle threat. In the cathedral, Ayles performs a ritual that reveals a hidden passage that leads to a room vacant of the Eye of Atamoni, much to Ayles's surprise.

Stahn Aileron then notices a seemingly well-made statue nearby, and Ayles recognizes the statued woman as Philia. Stahn's Swordian, Dymlos, explains that it must be petrification and returns Philia to her original form. Cured, Philia apologizes to Ayles and explains that she witnessed Lydon undo the seal to the room and retrieve the large Lens, which Philia is surprised to learn is the Eye of Atamoni. Philia recalls Lydon's words, beckoning her to join him in "saving the world", before explaining that Lydon fled on the light from the Eye of Atamoni while monsters attacked the temple. She agrees to accompany the group in pursuing Lydon, against Ayles's objection, and explains that he had been planning on journeying to Calvalese.

Back in the Seinegaldian capital of Darilsheid, the group is granted permission to board a ship en route to the Calvalesian port town of Cherik in pursuit of Lydon. From there, they visit the capital Kalviola to investigate its Straylize Temple. Philia smuggles the group in at night, and deep within the cathedral, they find Lydon, who berates Philia for leading the group to him, also recognizing Leon's Swordian, Chaltier, and suspecting that someone else is after him, referring to Hugo. Lydon refuses to explain himself to the group, instead summoning a hoard of basilisks with the Eye of Atamoni and fleeing while the group is distracted by the battle. They are then rescued by the Calvalese Oberon branch manager, Baruk Songram, who informs them that sea monsters have begun appearing near Neuestadt, prompting the group to investigate there as well. 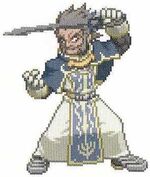 In Neuestadt, all seems well until a onslaught of monsters storm the otherwise peaceful city from the sea, so the group infiltrates the lead ship and finds Batista Diego, Lydon's associate who is working in tandem with him, in the captain's quarters. They defeat and imprison him, later releasing him deliberately with a homing beacon that directs them to Aquaveil. After defeating Batista in Moreau Castle, the group infiltrates Terazzi Castle to find Lydon with Tiberius Terazzi, the tyrannical ruler of Aquaveil. Forced into a battle with Tiberius, Lydon escapes on a Flying Dragon during the skirmish, and Tiberius mentions, before dying, that Lydon is headed to Phandaria.

After Lydon's manipulation of Tiberius, the group pursues Lydon all the way to Phandaria, where he has killed King Sark and usurped power in the snowy region. In the city of Cyril, they find Dalis Vincent, Mary Argent's husband, working for Lydon and are forced to fight him in Heidelberg Castle before reaching Lydon himself at the top of one of the castle's towers. Lydon, infuriated with the group's relentlessness, uses the Swordian Igtenos, which he stole from King Sark, to fight them in the open-sky tower, having his Flying Dragon attack them from a distance. Defeated, Lydon uses the Eye of Atamoni's power, which reacts violently with Igtenos, severely damaging the Swordian, rendering him unable to speak. Lydon, on the verge of dying, speaks privately with Leon, stating that he is just like him, referring to Hugo, and will end up the same way. Leon beckons to understand Lydon's cryptic message, but he dies before Leon has the chance.