View source
watch 01:17
Tales of Berseria - Character Trailer: Magilou
Do you like this video?
Play Sound

Ever since she was born, Magillanica had strong resonance and could see malakhim. However, her family thought her powers were creepy and they abandoned her as an infant. Eventually, she was picked up by a circus troupe and treated cruelly. The only friend she ever had was Bienfu, a normin who would eventually form a pact with her. Due to her popularity as the "Little Witch", the troupe made a killing. However, the troupe eventually took things too far, and they were tried for heresy. After a while, she was rescued by Melchior Mayvin, who set up an "accident" where she would survive, and adopted her. Magillanica worked hard under Melchior's wing, rising so high up to legate. However, when she failed his last test, Melchior disowned her. Devastated, Magillanica was rendered an empty shell until Bienfu took her to Grimoirh, who looked after her for a while. During her stay, Magillanica changed her name to Magilou. One day, Magilou took Bienfu and left on a journey.

Tired of Magilou's mistreatment toward him, Bienfu betrays his pact-sworn mistress to the Abbey, resulting in the organization breaking the pact, sending Magilou to Titania for "unlicensed witchcraft" and assigning the malak to Eleanor Hume. When Velvet escapes from the prison island with Seres's help, the malak woman opens the locks on the prison, releasing prisoners and inciting the riot, Magilou being among the rescued people. After Velvet defeats a Drake and harms Oscar Dragonia in her rage, Magilou arrives with Rokurou Rangetsu, and the three escape from the island into the stormy sea.

Magilou has long, platinum-blond hair and light skin. Her clothing is an eclectic mix of pink and blue, with hints of lavender, and resembles that of a court jester. Her skirt consists of books, each with a designated purpose. Magilou is the easygoing, and rather reckless at times, moodmaker of the group, which she manifests by telling convincing jokes that come at an edge of sinister and can turn other people's words into jokes, which tends to anger them. She tends to speak in alliterated phrases.

Ever quirky and silence-filling, Magilou serves as a comic relief in many of the game's more serious scenes. However, she also offers insightful comments capable of posing doubt or deep thought to others who normally shrug off her offhanded remarks. Although she acts aloof, Magilou is sharp and calculating, keeping her motives secret and her air mysterious. She clashes with Velvet due to the contrast in their personalities, but Velvet eventually comes to better understand Magilou's approach to situations despite its unconventionality. Magilou comes and goes as she pleases, accompanying the group when it benefits her but at the same time catering to their mission out of curiosity.

Magilou uses card dolls called Guardians (式紙, Shikigami?, "Ritual Paper") as her weapons. Her hidden artes provide her with slow but wide-ranging attacks that employ transformed Guardians. She excels in malak artes, focusing on Fire- and Water-elemental artes, as opposed to Eizen's focus on Wind- and Earth-elemental malak artes. She is also adept in healing in wide-encompassing areas with Healing Circle and Fairy Circle, the latter serving as her most potent. Her Break Soul is Spell Absorber, which allows her to drain enemy spells and then cast her own. Her mystic artes are Ascending Angel, a parody of Heavenly Bladewing, that expands her guardian to the heavens before dropping it on her target; Good Grip; and The Host of Forty-Nine. She also shares a dual mystic arte with Eleanor Hume known as Excelion Pierce.

In Tales of Zestiria the X, Magilou is first seen flying on her Guardian around Titania, tired from having escaped from the prison. When a dragon appears, Magilou appears behind Velvet, complaining about being woke up. After the dragon knocks Velvet away, she fights the dragon alongside Rokurou. After Velvet devours the dragon, she, Magilou, and Rokurou are last seen on a ship at sea. 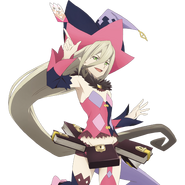 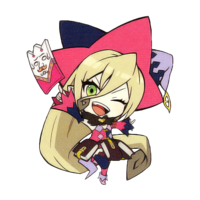