Malik was born and raised in Fendel, a country with an extremely unstable political climate backed by military strength. Desiring to reform the country from within, he joined Fendel's military, where he met and became friends with Kurt Bessel and Lorelia, both of whom held the same motivation. Around twenty years before the story takes place, they formed a rebel movement to overthrow Chancellor Eigen, who had come into power as the ruler of Fendel. During this time, Lorelia was somehow able to obtain sensitive information that would aid their rebellious acts.

Kurt eventually revealed to Malik that she was able to do so because she is Chancellor Eigen's daughter. Worried for her safety, Malik tried to convince Lorelia to leave the movement. However, she refused and was able to acquire important documents detailing the location of Fendel's cryas supply. Lorelia was killed by Fendel soldiers while giving these documents to Malik. Despite the movement continuing afterward, Malik was no longer as dedicated to it as he once was, and the revolution failed due to increased pressure by the present regime. Malik soon left Fendel behind and started a new life in Windor, joining its knight academy as an instructor.

Malik is a tall, well-built man with dirty-blond hair and piercing brown eyes. His attire consists of a brown jacket with red emblems and gold ornaments; faded, green pants; and large, brown boots. He wears black, finger-less gloves and a pink shirt beneath his jacket, which itself yields a purple interior, as evident from the collar and its trail in the back.

As an adult and instructor of the Knights' school, Malik is a disciplined man with honor. He is an adult man who can be both somewhat frank and in composure. He is the mentor of the party, being very mature everyone depends on him and trusts his opinion. He is strong to his beliefs and he does anything to protect them. Though on the flipside for comic relief, he tends to also take advantage of others in playful ways via providing them with false or ambiguous information, or doing things that seem very out-of-character for a man of his age.

However, the years have not been very kind to the captain as he carries very deep secrets and scars relating to his past. Despite coming to terms with most of them, the death of Lorelia, hinted to be a very close love-interest, still haunts him to this day, which is to the point where he refuses to be in a relationship with anyone else, and to a comical degree, refuses others' offers to tell him to get engaged.

Malik is the main offensive spellcaster of the game, though at first he may look more like a fighter. He handles the traditional Tales spells, lobbing out varying elemental blasts that often cover wide areas and usually deal a lot of damage to the inflicted opponents. While his burst style is focused on magic, his assault style is focused on long range attacks using his bladerang, which will always return to him.

Almost all of his assault artes tend to stay around the area where the bladerang is flung, making him open to attack until his weapon returns which makes him a bit of a tactical-ranged zoner. However, he does learn skills that have it return more quickly to his hand. He may look fairly solid as a melee character but he is rather fragile, as his defense is really low compared to his high HP. When questioned about the origin of his fighting style and handling of his weapon in one of the skits, Malik himself proclaims that it is "top secret", making the actual practices of his fighting style rather ambiguous at best.

Malik appears in two of Tales of Crestoria's limited time quests that intertwine with one another, "Operation: Midnight Snow" and "Honor Among Thieves". Prior to his introduction, Malik taught Aegis Alver at the knight academy he attended to. As he did not approve of King Gadel's methods, he still believed in Aegis after the latter had been branded a transgressor. He is first seen in a tavern, covering shifts for the current bartender. He is talking with the only customer, Jade Curtiss, when Aegis and Kanata Hjuger arrive, looking for Vicious. Suddenly, the group hears an explosion coming from the basement and hurry down there to find Vicious with twenty casks and thirty bottles missing. Vicious says the stockpiles were already empty when he entered. The group eventually discovers that the bartender is actually a black marketeer for alcohols from Toshimina. Jade arrests the culprit and makes a report back to Toshimina. After the incident, Malik leaves the academy to become a mercenary. He is approached by an ambitious, young boy named Karol Capel, who tells him of a so-rumored "casino town" that the Order of Knights is currently frequenting. 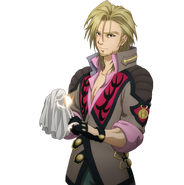 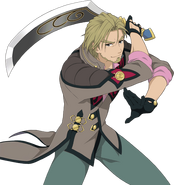