Mao (マオ?) is a boy without memory traveling with the imposing Gajuma warrior Eugene Gallardo, who Mao views as a father figure. He uses two tonfas as his weapons. Armed with many offensive elemental techniques, Mao is a balanced character who can attack at long-range with spells and fight at close-range with his tonfas. Mao uses the Force of Flame.

Mao, along with Eugene, travel to the small village of Sulz, where they meet Veigue Lungberg, a Force user. Mao offers to help Veigue control his Force, but Veigue casts a wall of ice over Mao. Shocked to see that Veigue has control over his Force, Eugene orders Mao to fight him. After a small battle, Mao uses his Force of Fire to help Veigue free Claire Bennett from her ice prison. Afterward, Mao and Eugene are invited to Claire's house for dinner, but this is cut short when Saleh and Tohma of the Four Stars attack the village. After Veigue awakens after being knocked out by Eugene, Mao reveals that six months prior to the events of the story, Eugene was the commander of the King's Shield, and he was one of his subordinates. Mao also reveals that when his Force had awakened it went into a berserk rage, which caused him to lose his memories. Mao and Eugene persuade Veigue to come with them to get stronger and go with them to stop the Four Stars and save Claire.

Much later in the story, during the Sacred Beast trials, Mao is tested by Fenia in her shrine near Pipista. When the group approaches the shrine, Fenia's voice calls to them, and Mao immediately recognizes her voice and recalls how the shrine appears familiar to him, making it evident that this is Mao's trial. Throughout the shrine, Mao falls into the recesses of his mind, questioning his existence and citing his Force of Flame as a connection to the element of Fire that bore him. Mao then experiences a series of flashbacks, one being when Mao's Force went "berserk", causing him to storm Calegia Castle, and another one being when Eugene named him after his founding and acceptance into the King's Shield under Eugene.

In the naming flashback, Eugene explains to Mao how his name means "nothingness" in Ancient Calegian, representing a new beginning due to Mao's apparent amnesia. Mao's acceptance of his name is disrupted with Fenia's words, however, asking him if that truly is his name. Another flashback depicts Mao's creation by the Sacred Beasts, him being an experiment of theirs to see the world through a human's eyes. They tell him that he has no race, as well as that, while he is their creation, his heart is his own. The Sacred Beasts' conversation regarding the dilemma with the races is also revealed in a flashback, and Mao's purpose as an attempt for the Sacred Beasts to better understand the human experience becomes more defined. Fenia speaks in this flashback, revealing how Mao's heart and eyes were formed from her body.

At the top of the tower, in its final room, Fenia appears and introduces herself before making it to where only Mao can hear her. She explains to him that his true name is Orselg (オルセルグ, Oruserugu?), meaning "Untainted Eye" in Ancient Calegian, as well as that he was created by the Sacred Beasts for a distinct purpose. Fenia then asks Mao to define his existence, and his answer impresses her. She bestows upon him her power of Fire before granted the group a hint correlating with the location of the next Sacred Beast.

Mao appears as a playable character. Mao first appears along side Eugene in the game during the ninth story mission when the Protagonist, Annie, and Ruca Milda go into the Garret Woods to find Veigue and the others. Mao and Eugene explain to the party that Veigue went up ahead to save Claire from the Greater Craymel Celsius, and they decide to wait until the party returns. Mao chooses to stay on the Van Eltia with Eugene and becomes a recruit for the player to take on missions. Mao goes on another mission with the Protagonist and Eugene when they go to the Moscopi Desert to install one of the antennas. There, they are ambushed by negative monsters and are forced to fight them. After defeating the monsters, the Protagonist places the antenna and they return to the ship.

Portrait artwork for Tales of Rebirth. 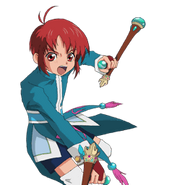 Cut-in image for Tales of Rebirth.

Status image in Tales of Rebirth. 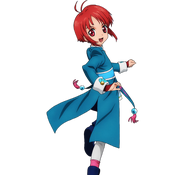 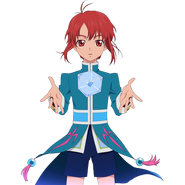