This article is about the Spirit Martel. For the half-elf character in Tales of Symphonia, see Martel Yggdrasill.

Martel (マーテル, Maateru?) is a Spirit who appears in the Aselia timeline games. She is the Spirit of the World Tree, Yggdrasill. In all appearances, Martel typically appears as a green-haired woman.

Martel makes her first appearance in Tales of Phantasia as the guardian spirit of the Great Tree, Yggdrasill. Cress first sees Martel when he visits the South Forest, the Forest of Spirits in the present, and has a vision of Yggdrasill in its healthy state, with a woman pleading for them not to hurt it. After traveling to the past, the Wind Spirit Sylph pleads with the party to see Yggdrasill. When they reach the Great Tree, Martel, as guardian of the Great Tree, warns them that Yggdrasill's death is near. When the engineers at Midgards fire their magitech cannon to eliminate some of Dhaos's minions, Martel states that mana is fading, the first hint as to what the mana depletion she warned the party about is.

When in the future, the party visits Yggdrasill once more. Martel awakens and tells them that the Great Tree is still all right because one day mana consumption returned to normal. She tells them about a man with golden hair who watched over her as she slept. When Martel leaves, Dhaos arrives and it seems as if it would come to blows, but he refrains from battling in order to not harm Yggdrasill. In the end, using Yggdrasill's gathered mana, Martel creates a "Mana Seed" to give to Derris-Kharlan.

Martel appears in Tales of Symphonia as the Summon Spirit of the World Tree, Yggdrasil. Martel is incarnated from the soul of Martel Yggdrasill, along with many others through the physical vessel of Tabatha. Martel makes her true appearance at the story's end, when the Great Seed germinates to create a new tree. Martel meets with Lloyd Irving and Colette Brunel and reveals herself to be a newborn Spirit created from the incarnation of all the souls that died to protect the land of Kharlan. She tells Lloyd and Colette that the tree they see before them is the future form of the new tree and that, right now, it is nothing more than a small seedling while also telling them that, in its current state, it will wither and die.

When Lloyd asks her how they can protect it, she tells him that they must provide the tree with love and adoration, stating that, as long as those conditions are met, she will always protect the tree. Lloyd then promises that he and his friends will make sure the tree will never die. Hearing this, Martel asks Lloyd to give the tree a new name as proof of the pact. She reveals that the previous tree, the Giant Kharlan Tree, was planted by the elves when they first came to Aselia to protect them, and that the new tree protects everyone: elves, humans, and those caught in between. Because of this, the tree requires a new name. After Colette tells Lloyd to name it for everyone, Lloyd finally comes up with a new name.

Martel is mentioned Tales of Symphonia: Dawn of the New World throughout the story. Martel comes forth before Lloyd and tells him the situation about Ratatosk and the Centurions' cores. She asks him to help save the world a second time. It is also thanks to Martel that Lloyd is not affected by the Centurions' cores, as he is the giver of the new World Tree's name. 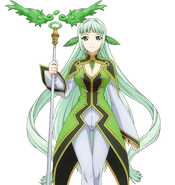