Mary Argent (マリー・エージェント, Marii Eejento?, "Mary Agent") is a playable character in Tales of Destiny. In the original PlayStation version of the game, Mary joins the party as a required member during early parts of the game, but after a specific point in the story, Mary's services as a party member are either removed or become fully optional, based on a divergent plot element in the game that depends on the player's actions. In the PlayStation 2 remake of the game, however, Mary remains with the party as a permanent member.

Suffering from amnesia, 24-year-old Mary is not aware of her last name due to an unknown event in her past. She is usually quiet and does not show much emotion, but she can fly into a wild frenzy during battle. Her partner, Rutee Katrea, uses Mary for her own financial gain. Stahn Aileron first encounters both Mary and Rutee on the Flying Dragon ship Draconis, where Mary drags Rutee to an escape pod just as the ship's engine begins to fail due to an unprecedented onslaught of monsters. Mary later joins forces with Stahn in Janos to rescue Rutee, who has fallen into a trap in a nearby ruin.

After Rutee's rescue, the trio suddenly realize that they have encountered each other before on the Draconis, where Mary and Rutee were disguised as crew members. Rutee decides to travel with Stahn to Seinegald so that she may secretly steal his Swordian, Dymlos, and Mary willingly follows Rutee. When the group is captured in Harmentz due to Rutee's poor reputation as a Lens-hunter, Mary becomes an accessory to the crimes of both Rutee's thievery and Stahn's "theft" of Dymlos from Seinegald. She accompanies the two and Leon Magnus when they are assigned to investigate the sudden disappearance of the Eye of Atamoni, which leads them on another search once it is revealed that Lydon Bernhardt has fled with the powerful Lens.

Later in the story, the group stops in Cyril on their way to the Phandarian capital of Heidelberg to overthrow Lydon. Almost immediately upon entering, a pair of soldiers interrogate the group only to recognize Mary, whose memories are still lost to her. One of the soldiers claims to have fought alongside Mary, as well as the he and her other former comrades assumed she had died. They then leave to retrieve their captain only to have Dalis Vincent approach them and notice Mary for himself. He begins to say her name but stops himself before telling his soldiers that they are mistaken. To the soldiers' confusion, Dalis then orders them to return to Heidelberg and informs the group that they should leave the country.

Mary attempts to stop Dalis from leaving, but to no avail. A woman then approaches Mary and recognizes her as well, mentioning her abandoned home and how Lydon has usurped power in the region. The group makes their way to Mary's house, where a flood of memories return to her. She recalls that Dalis is her husband and the sword in her possession is his. Mary then mentions a revolution that occurred two years prior, in which she fought alongside Dalis, but that their militia was defeated. She and Dalis fled but were pursued, so Dalis allowed Mary to escape alone, while he was captured. As a result of the shock, she developed amnesia.

When the group infiltrates Heidelberg Castle, they find Dalis waiting for them. Mary tries once again to speak and reason with him, but he instead draws his sword, engaging the group in battle. Once defeated, Dalis begins to drop his guard, commenting on Mary's steadfast beauty. He then explains that he has been trying to pave a new path for Phandaria, but King Sark had opposing views. Dalis led the rebellion that took place two years prior, and the country's military put an end to it. He was imprisoned to atone for his crimes, giving him ample time to reconsider his actions.

However, when Lydon came, Dalis found a way again. Unfortunately, Lydon had radical plans that caused Dalis to doubt his actions once more. He apologizes to the group, but Garr Kelvin draws his sword, preparing to kill Dalis, who claims to be ready for any consequence. Mary begs Garr to stop, and he withdraws, telling Dalis to leave. Dalis accepts this, and Mary asks the group if she can leave with Dalis as well, to which they agree is best. Mary thanks the group for their kindness and expresses her belief in their victory against Lydon before leaving with Dalis.

Mary is later shown after Lydon's defeat with Dalis in their home as she nurses him back to health. Three months after these events, the group encounters Mary and Dalis in Frostheim, and Mary explains that they are out because Dalis thinks it will be good for his wounds. When the group explains that the Eye of Atamoni has gone missing again, Mary considers accompanying then, but Stahn insists she stay with Dalis to continue caring for him. As the group prepares to leave the port town, Dalis urges Mary to go with them, citing her worry over the situation at hand. Mary hesitates, but Dalis expresses his happiness to have her by his side again and wants to return the favor by letting her journey with her companions again. Mary accepts this and raises her weapon with Dalis to signify their eternal bond before leaving with the group.

In Tales of Destiny 2, Mary can be found in Heidelberg, washing dishes in the inn's kitchen. When spoken to, she mentions how Kyle Dunamis bears a strong resemblance to someone she once knew, referring to Stahn. A portrait in the city's museum reveals Mary's true name to be Mary Vincent (マリー・ヴィンセント, Marii Vuinsento?), having adopted Dalis's surname upon marriage, and states that she has since retired from fighting in order to lead a quiet life.

Mary is a dark-skinned woman with great strength and a fiercely imposing stature. She has magenta-colored hair, bound into a long and bushy ponytail and held in place with a white headband. Her attire consists of a maroon armor top with protective shoulder pads and a green, sarong-style piece underneath that extends downward, while her legs are primarily exposed. Contrary to her bold, amazon-like exterior, Mary is actually rather submissive and often clueless about her surroundings. Due to her memory loss, Mary has no goals or ambitions, and she eagerly follows the actions and decisions made by Rutee without objection.

Mary's attention tends to drift at times, however, causing her to focus on things that are entirely irrelevant to a given situation just because they are shiny or cute. She will chase after these things, which causes frustration on Rutee's part when Mary wanders off instead of focusing on her task. However, Mary is fiercely loyal to her partner, and she will protect Rutee from any danger at the risk of her own life. It is during battle that Mary's inner beast expresses itself, manifested through her berserk rage directed toward her opponents, and she will aggressively combat her enemies without remorse. Upon the conclusion of any battle, Mary reverts to her subdued nature, perplexing others with her drastic shift in personality.

Mary has no Swordian, but she is a strong physical attacker who relies on axes in the PlayStation 2 remake of the game, although the original release allows her to use other powerful weapons such as swords and spears. Her fighting style focuses largely on a hybrid of slash- and strike-based attacks, in which she bashes the enemy with destructive force while simultaneously using her weapon to cleave the enemy. 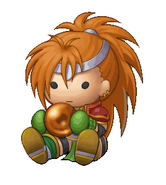