Max (フォッグ, Foggu?, "Fog") is one of the optionally playable characters in Tales of Eternia.

Max is the leader of the resistance group known as the Shileska Freedom Army. Shileska was founded to challenge the reigning tyrant of Celestia, Balir, in order to force him from power and establish Max as the ruler of the world. Although his primary motive is world domination, he commands the organization with a unique enthusiasm which garners support for his cause due to his endearing charisma. However, most of the functional decisions of the organization are handled by his Sub-Commander Ayla, who is unwavering in her loyalty as his immediately subordinate officer.

Prior to the start of the game, Max had been married to a woman named Lesitia, an artist who fell in love with him from the first time they met. However, Lesitia came to question her love for Max and parted from his side before they could start their life together. She sought to travel the world on her own as she comes to terms with her feeling of deep affection for a childhood friend who had died years ago, unsure if such feelings would conflict with their marriage. In the meantime, Max was left with only his pet Miacis, Dede (デデ?), who was raised by Lesitia, and he continued to cherish the pet while trusting that Lesitia would return to him one day.

In spite of this, Max pushes onward with his rebellion to overthrow Balir, establishing a secret base within Tinnsia where research could be applied toward the development of the Craymel Cannon, a weapon designed to destroy the magical barriers that surround Balir Castle and enable their group to launch a full-scale assault on the fortress. However, the theory behind the device's functionality relies on the use of a massive Craymel Cage to amplify the power of stored Craymels, and a cannon that houses such a Craymel Cage would become too large to mount on any seafaring vessel to allow it to shoot directly at the castle. After learning about the party that led an expedition to calm the Greater Craymel Celsius and restore the town of Peruti to its normal climate, Max and Ayla call for an alliance with Reid Hershel and his companions, to pursue their mutual goal of defeating Balir. Ayla also asks them for any knowledge that they might have to enable the size of the cannon's Craymel Cage to be decreased, and Keele Zeibel suggests the use of a specialized Craymel Cage, the Parasol device developed by Galenos to store the Greater Craymels themselves.

Due to the greater output generated by such Craymels, the size problem ceases to become an issue, and the single obstacle that prevented their organization from overthrowing Balir could finally be surpassed. In order to generate a truly powerful energy blast from the cannon, the Greater Craymel Volt is needed to join their cause, and Ayla requests for Reid's group to call upon its aid. At the same time, she asks for Keele to stay behind and oversee the refitting of the Craymel Cannon, and Max announces that he will travel with Reid in Keele's place, to lead the group to Volt's domain.

Upon reaching the dungeon, the party encounters a riddle that bars entry from those who cannot solve it. But Max throws aside such limitations with his own strength, successfully breaking through the doorway without regard to the riddle's meaning. He attempts to perform the same feat later within the same dungeon, but he is electrocuted by tendrils of discharged lightning. Nevertheless, he shrugs off the damage, and the party eventually makes its way to Volt's lair. Max is electrocuted once more by Volt before they battle with the Greater Craymel, and they soon discover that Volt has been in pain due to malfunctioning machinery within its lair. After they help Volt and gain its cooperation, they return to the Shileska base, where Max reveals the true extent of his militia, a massive army of Celestians who are willing to fight and die under him in order to depose the tyrant Balir now that the way is to be cleared to Balir's fortress.

The Craymel Cannon, redesigned with Keele's assistance, is mounted to the Van Eltia with the supervision of its captain, Chat, while several other vessels are prepared for transporting the army and its munitions to Balir Castle. Max commands Ayla to stay behind and guard their hideout, and she informs Max of the purpose that Reid's group hopes to achieve in defeating Balir, the reversal of the Grand Fall. But this does not hinder Max's plans, and he simply sees it as an opportunity to conquer the world and save it at the same time.

Shileska's fleet, consisting of five ships and the Van Eltia as its flagship, begins its naval voyage to Balir Castle, but they are stopped by an armada of enemy ships that are blockading the fortress. While there is no indication of the affiliation of these enemy vessels, they start to open fire upon Shileska's fleet. The newly installed Craymel Cannon quickly destroys the enemy fleet, and then its power is turned upon the protective magical barrier surrounding Balir Castle, shattering it and a segment of its outer walls. After their invasion fleet docks at the castle, Max takes his leave from the party in order to be with his men, and his forces quickly establish a forward camp immediately outside of the castle doors. Max takes command of a squad of infantry soldiers and ventures inward, while Reid's party goes along a different route within the castle. 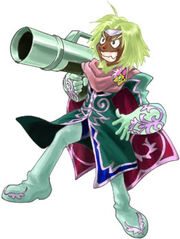 By the time Max's squad enters the throne room of Balir's fortress, he discovers that Reid's group managed to reach the area before him, and he assumes that the figure they are talking to is Balir. He charges a blast from his gun and shoots the figure, surprising everyone with his sudden late appearance, but as he moves closer, he realizes that he had shot a woman. Momentarily confused, he simply decides that Balir is a woman, having never seen Balir personally, and he commands his men to charge in order to attack her. But the woman, whose identity is revealed to be Shizel, Balir's consort prior to his death ten years ago, simply commands a burst of lightning that strikes Max and his forces. In retaliation, Reid's group tries to fight her, but they are overwhelmed by her Dark Aurora and are nearly killed. Thanks to the intervention of Rassius Luine, Reid and Max's respective parties are able to escape from Shizel, and the remaining Shileska forces manage to secure the whole castle. As Shizel teleports herself into the dark matter within the Orbus Barrier, Max is able to declare his victory against Balir at this battlefront, and the castle is put under Shileska's control.

While Max no longer has any direct impact on later events in the story, Reid's party has the option to recruit him at any time after this event, and he can travel with the party and fight on their behalf. But after his perceived victory against Balir, Max asserts himself as the de facto ruler of Celestia, providing himself with the authority to open negotiations with the people of Inferia after they start to invade Celestia in full force. After achieving a mutual agreement with the Imperial Knights under the command of Captain Roen Lamoa, to devote their combined manpower and knowledge toward stopping Shizel and the Grand Fall, the Shileska forces construct a massive Fringe Cannon at the top of Balir Castle, to be used to break through the dark matter and enable Reid's group to assault Shizel's domain within Vatenkeist.

Throughout the construction process, Max joins Reid's party and finds himself involved in a series of misadventures, during which he encounters a Pink Miacis, a legendary breed thought to be the "Courier of Fortune", in various locations throughout the world. Every attempt to catch the creature has resulted in his electrocution, but after he recovers from each shock, he envisions a new way to apply the power of the Craymels to generate different elemental blasts from his Craymel Gun, as if the Pink Miacis grants him with new artes with each shock.

At one point, he discovers the Pink Miacis with a piece of art canvas stuck in its mouth, and eventually Reid reveals to Max that he had several worldwide encounters with a traveling painter at the same locations where the Pink Miacis could be found, during the times that Max is not accompanying them. At Jini, the artist tells Reid that she completed her sketchbook and that she can finally offer it to the sea to the childhood friend of her memories. By doing so, she says she can now return to her husband to resume their lives together, revealing herself to be Max's wife, Lesitia (リシテア, Rishitea?). Upon hearing of this good news, the Pink Miacis fades away without shocking him, and Max recognizes that fortune truly has been bestowed upon him as he learns how to optimize his Craymel Gun to launch multiple elemental blasts at once, leading to the creation of his most powerful arte, Elemental Master.

Max is a tall Celestian with a well-built physique, bearing a large elara upon his forehead. He wears a long trench coat imprinted with formal Celestian designs, complete with a flowing cape and scarf, but this does not hinder his fighting ability. While he is not intellectually gifted, he has an exuberant personality that draws others to him. He frequently shows great optimism, often declaring his agreement to various statements and decisions made by others around him with a simple, enthusiastic "Yeah!", and he gives a hearty and boisterous laugh whenever he has a cheerful mood. His love for the Miacis contributed to their use as the symbol of Shileska, and its soldiers declare the words "Miacis to our hearts!" as a sign of respect and admiration to their leader, who truly has taken the Miacis to his heart. To this end, he constantly seeks out the Pink Miacis so that he could befriend it in spite of the many injuries he receives from each encounter with the creature.

Max's weapon of choice are portable shoulder-mounted Craymel Gun cannons, which can be used to attack enemies from a distance or engage in melee combat by using them as bludgeoning tools. He primarily uses long-ranged artes that focus on shooting different elemental attacks at the enemies, such as Air Blade and Dark Laser. Each of his artes require a charging delay similar to spellcasting, due to the use of Craymels within the Craymel Cage that powers his weapon. This delay can be reduced by imputing specified directional inputs which are shown below his portrait during battle, reducing the duration of his delay by a fraction of a second for each correct input. Upon obtaining the "Canceler" accessory which is exclusively usable by Max, he gains the ability to chain his higher-tier artes without the charging delay, greatly increasing his burst damage output by charging as much as required for his basic artes and then chaining into progressively more powerful techniques with no down time.