Mayvin (メーヴィン, Meevin?) is a supporting character in Tales of Zestiria. He is an explorer who assists the protagonists on certain occasions and is later revealed to be the Storyteller (語り部, Goribu?, "Narrator"), a title given to those in a single ancestral line as punishment for an unspoken act.

The original Storyteller took an oath that he and his descendants would record the world's history for generations to come, and if a descendant breaks this oath, they will die. The matter itself is considered to be taboo both to the Storyteller, as well as among seraphim. Mayvin himself is first met at the Tintagel Ruins, where he is revealed to be an acquaintance of Rose. He later plays a more vital role in the story at Lohgrin, where he guides the group in collecting iris gems. After finding them and returning to Mayvin, the group is led to a final iris gem and forced to fight Mayvin in order to prove their determination. After his defeat, Mayvin dies as a result of breaking his oath, and the group buries him in Lohgrin.

Mayvin is an old man of large stature who has short hair, green eyes, a moustache and a beard. He dons exploration gear suitable for almost any harsh condition, composing of dark-colored pants and boots, a turquoise winter coat, a chest-strap of pockets, dark-colored gloves, a yellow scarf, and a pair of goggles around his neck. Although appearing seemingly cheerful, Mayvin confesses prior to his death that he is glad to not die alone, as he has suffered from loneliness his entire life.

Mayvin initially uses trivial items that he throws at the enemy, such as bottles, crates, and silver trays. As his health deceases, however, he begins to use his pipe as a sword to perform the sword-drawing techniques in battōjutsu. His mystic arte is Luminous Sabre. 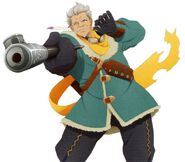