Mel (メル, Meru?), also localized as Mell, is a protagonist in Tales of Phantasia: Narikiri Dungeon who strives to lift the curse placed on her by the gods.

Mel fell from the sky prior to the story's opening along with her twin brother, Dio. The two of them were found by a mysterious stranger who raised them in the Narikiri House until they were around thirteen. Up until that point, nobody knew quite where they came from, but one day, a woman named Norn appeared who seemed to know about their past. Apparently, they would once committed terrible crimes and their punishment was a curse from the gods. The only way to stop this would be to travel to the past and undo what they did, but first they had to meet the Heroes of Eternity and fight off twelve Spirits in the Ordeal of Spirits.

Early in Narikiri Dungeon X, in the town of Valhalla, she used magic in a battle when coincidentally, a singularity known as a Prism Ring (?) engulfed the town. She incorrectly believed the Prism Ring's formation was her fault. In an attempt to quell the phenomenon, she enlisted the help of four spirits. The initial attempt proved unsuccessful, but she and her brother eventually found a way to save Valhalla and learned she was not to blame.

Eventually, Mel learned that she was a scientist on Derris Kharlan named Meltia Bandi in a past life, a 27-year-old soldier. Together with her brother Dio, she used to build incredible magitech weapons for her home country while driven by the pursuit of knowledge. Killed before she could use her life's work, Dios fired the Magitech weapon. Doing so doomed Derris Kharlan, draining all of the mana and killing their World Tree, leaving Meltia embittered and cynical.

Dio and Mel proceed to fight their past counterparts at the end of their Ordeal to absolve themselves of their past sins. When Dios and Meltia are killed, they say how the protagonists have broken the chain of fate by killing their past selves, their present selves cease to exist. On that last dark note, Meltia merges with Mel. Norn saves them, only to test them herself. When she is defeated, Mel ceases to exist, but she is reborn without memories and given to the player once more. 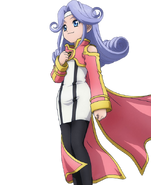