Melanie the Crimson (閃紅のメラニィ, Senkou no Meranyi?) is a minor antagonist in the Main Quest of Tales of Legendia and one of Vaclav Bolud's three Terrors.

Melanie first appears at the Bandits' Lair when she and Vaclav's soldiers attack and kidnap Shirley Fennes. After the party escapes from the lair, Moses Sandor challenges her to a fight to distract her. Moses manages to escape, but Melanie continues to follow Senel Coolidge's group. She does not appear again until Senel leaves the rest of the party with Shirley after the events of the Secret Passage. At the cliff exit, Melanie, along with the other Terrors, appear in front of Senel to take Shirley. Senel and Melanie battle on the cliff, but Melanie defeats him by casting Eruption, and Melanie exists alongside the other Terrors as Vaclav captures Shirley.

At the Forest of No Return, the Terrors follow Vaclav's orders to get Senel and eliminate the other members of Senel's party. While the other Terrors went to the bandits' hideout in the forest, Melanie goes to the forest entrance to ambush the party should the others fail in their operation. Melanie sets an "Armor Angler" on the party once she sees them and, though they defeat it, reveals that she has a hoard of Anglers and some of Vaclav's soldiers with her. The party manages to escape this threat thanks to Maurits Welnes. With the party's escape, Melanie leaves with the other Terrors to head to the Bridge. The party faces Melanie one final time at the Bridge's first floor. Melanie appears at the entrance with a group of soldiers, but Jay helps the party escape confrontation. At the final level of the first floor, Melanie challenges the party alongside a minor enemy, but falls in battle.

Melanie is a tall and slender woman with lavender-colored hair. Her outfit consists of a horn helmet on her head, black armor covering the upper half of her body, long red high-heeled boots, black and red gauntlets on each arm, and her signature rapier, which she carries. Melanie, like the other Crusand soldiers, enjoys killing and causing pain to others. She is a cunning soldier and shows great respect for her superiors.

Melanie fights with a rapier and uses a mixture of Fire-elemental Iron and Crystal Eres. When Senel first fights her, she uses the spell Fire Wall as regular attack, and when the battle ends, she will cast the highest Fire-elemental Crystal Eres Eruption. During the fight with Melanie at the Bridge, she obtains an Iron Eres and lacks the Eruption spell. From the start of the battle, she will primarily use the Iron Eres Red Rose (紅華, Kouka?), which causes an explosion on the enemy with her rapier. After some of her health depletes, she begins to use novice, Fire-elemental Crystal Eres such as Fire Ball and Fire Wall.

Game model in Tales of Legendia. 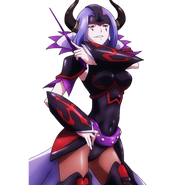