Meredy (メルディ, Merudi?) is one of the protagonists in Tales of Eternia. In the Melnics language, Meredy's name is pronounced as Muerudi and transcribed into English as NALR. She owns a small pet known as Quickie, whose name was bestowed by Reid Hershel based on the sounds the creature makes.

As a child, Meredy was greatly loved and cared for by her parents of extremely different origins. Her mother, Shizel, was a Celestian woman who fell in love with Transon Balir, a scholar from Inferia who discovered a means of entering the opposing world 14 years before Meredy's birth. However, Meredy's memories of her childhood were greatly suppressed due to extreme trauma, and Meredy only faintly remembers memories that provide her with warm and calm thoughts. The remaining memories of her youth express an environment of cruelty and inhumane experimentation by her mother, who subjected Meredy to extreme pain and horrors until she was finally able to escape with the help of Galenos, an aged Craymel Engineer who snuck Meredy out of Shizel's reaches. Meredy remembered that Shizel was once kind and loving, but Meredy reasoned that this drastic shift in her mother's personality must have been caused by her father Balir, who had gained notoriety as the man who murdered the reigning king of Celestia and assumed his place as a tyrant ruler.

Meredy and Galenos went into hiding for years at Imen, and Meredy studied the concepts of magic and Craymel energies so that she can obtain the strength to face her own father in battle one day. Her resolve to defeat Balir surpassed all other motivations, and she excelled in the use of magic based on Celestia's Craymels, which was rapidly becoming a lost art largely due to technological advances in weaponry. Soon, however, Galenos discovered that the balance of Craymels is changing, and a mass of dark matter started to accumulate within the Orbus Barrier. He developed the theory of the Grand Fall, believing that Balir must have gained the ability to use the Dark Aurora to damage the equilibrium between Celestia and Inferia and cause the two worlds to be pulled closer to each other, eventually leading to an unsurvivable collision.

To combat this impending disaster, Galenos invented the Parasol, a device that is used to modify a Craymel Cage, enabling it to store the Greater Craymels themselves. Along with this, he developed the Craymel Craft, a powerful but small shuttlepod that would allow a single occupant to traverse into the upper atmosphere and pierce the Orbus Barrier, allowing it to cross over to the atmosphere of the opposing world of Inferia. Galenos believed that the Grand Fall could be prevented only if the cooperation of the Greater Craymels of both worlds is achieved, and these two inventions could be used to achieve that purpose. Meredy quickly volunteered for this task, taking upon herself the responsibility of gaining the trust of Inferia's Greater Craymels and the population of Inferia itself, so that the people of the other world could find other ways to stop the Grand Fall through any possible unknown technology or military aid.

At the start of the story, Meredy and her pet Quickie are seen near the Craymel Craft in the middle of the night, having been unable to sleep during the night. Galenos discovers them at the shuttlepod, ready to depart with Meredy expressing her determination to succeed in her task. Galenos then bids her farewell as she boards the craft and departs for the Orbus Barrier, lamenting the danger that will soon affect both worlds.

Upon crossing over the Orbus Barrier into Inferia, Meredy starts to lose control of the Craymel Craft, which accelerated toward the ground due to the world's gravitational pull. She crashes into the forest of Rasheans, interrupting a conversation between two villagers, Reid Hershel and Farah Oersted. The two Inferians immediately try to search for the wreckage of the craft, discovering Meredy and Quickie uninjured by the impact of the crash landing. Meredy tries to talk to the two natives, thanking them for helping her and introducing herself in her own native language before realizing that her rescuers cannot understand her words. Reid recognizes that her Craymel Craft is about to explode, and he grabs Meredy to pull her away from the wreckage as the vessel bursts apart. Upon coming into contact with each other, their bodies generate a rainbow aura, causing Reid to go dumbstruck as Meredy hugs him tightly with joy. 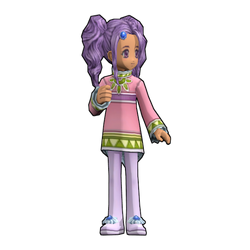 Since they cannot overcome the language barrier between their two races, Farah decides to take her to the Elder of Rasheans, Khamran, to determine what must be done for her. Meredy asks the Elder if he knows the location of the Greater Craymels, but her words are met with cold silence as Khamran considers this to be a bad omen. Due to Meredy's dark skin color and strange clothing, he feared that she would bring misfortune upon their village, prompting him to have Meredy cast out of the village for the sake of their continued safety. Before this could be acted upon, however, another unknown individual bursts in through the wall of Khamran's home.

Meredy recognizes the individual to be Hyades, who tells her in their shared language that he has come to get in her way. Hyades proceeds to attack Meredy, causing Reid and Farah to protect her by fighting back against him. They are ultimately successful in repelling the intruder, but Khamran demands for Meredy's removal from the village, seeing the incident as proof of danger caused by sheltering someone so unknown to them. Upon their departure from Rasheans, Reid and Farah decide that they need the help of their childhood friend Keele Zeibel to help with translating Meredy's words, since they have no way to decode her language. They journey to the town of Mintche.

Meredy's playful attitude is reminiscent of a hyperactive child. She jumps on things and dances spontaneously, and she often speaks with incorrect grammar even when her words are finally understood by the party. Her constantly cheerful persona is exasperating to others at times, and she rarely understands that she might be doing wrong or unacceptable things in society. However, she is easily upset if others accuse her or other fellow Celestians of being uncivilized barbarians. Meredy is dedicated to defeating Balir even though the fact that he is her father brings her much pain during her travels. But she is reluctant to show her relation to him, at one point mentioning that a book written by her father was authored by a man named "Transon", the given name Balir had left behind when he gave up his Inferian identity. Once her mother Shizel is revealed to be the cause of all problems blamed on Balir long after his death, her sorrow grows but she still continues on with her mission to defeat the cause of the Grand Fall.

Meredy does not fight physically in any way, and her "weapon" of choice is a whistle, which is used to command her pet Quickie to attack the enemy. Although Quickie has no stats associated with it, Quickie's damage will be modified by Meredy's stats. Quickie can attack the enemy even while Meredy is casting a spell, enabling her to deal damage to enemies while immobilized by her spellcasting delay. Quickie cannot be targeted or hit by enemies, and this has the added benefit of allowing Meredy to keep enemies staggered at a distance to ensure her safety while casting spells. All of Meredy's basic attacks involve her directing Quickie to attack, regardless of if she is casting a spell or not, but she can only directly position Quickie while casting a spell. Because of this, Meredy has no means of reducing her spellcasting delay through the same directional inputs that Keele and Max can use. If Quickie is not actively being used, it simply bounces around Meredy during battle, following her as she moves.

In Tales of Symphonia, Meredy appears in the Meltokio Coliseum as a member of the enemy party in the final party exhibition match, alongside fellow party member Farah and Garr Kelvin from Tales of Destiny.

In Tales of the Rays, Meredy, Quickie and Keele are exoflected by Ix Nieves and Mileena Weiss. Meredy is first seen Regulus Road when she sees Quickie with Ix, Millena, and Karia. As she speaks in Melnics, the three cannot understand her. Along the way, Meredy hears Keele's voice and rushes to find him fighting monsters. Back in Mintche, Ix, Mileena and Karia explain about needing to kill shimmeras and seal shimmera glasses. Their search takes them to Ayla Forest, where they encounter Keele's professor Mazet, who just fainted from an attack from shimmeras. After killing them all, Mazet wakes up and gives Ix and Mileena Orz Earrings that can be used to communicate with Meredy.

Meredy appears in Tales of Crestoria during the limited quest "Suspense! Tales of Disbelief". Meredy is flying a small ship with Quickie to see the king of Toshimina when the ship crash lands in a forest. They are then confronted by a mysterious girl looking for a "hero", before leaving. Back in town, the two find the girl from before being confronted by a villager about the shockwave caused by the crash. To prevent things from spiraling out of control, Shirley lies and says that the girls are here for a visit, before taking them to her house. The mysterious girl introduces herself as Reala before Shirley helps pack supplies for their journeys. When people discover Meredy's crashed ship, Meredy insists that they cannot know what is in it. Since the ship can no longer fly, they manage to destroy it before it can be examined further. With that done, Shirley sees Meredy and Reala off. 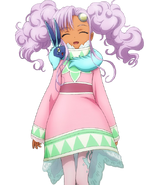 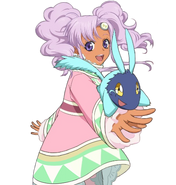 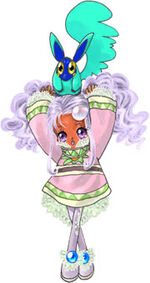