Aselia Wiki
Register
Don't have an account?
Sign In
Advertisement
in: Mieu, Tales of the Abyss characters, Supporting Characters
English

Mieu (ミュウ, Myuu?) is a young cheagle from the Cheagle Woods in Tales of the Abyss. Cheagles, considered holy by the Order of Lorelei, normally live in herds in forests, but fate brings him to join Luke fon Fabre and the others on their adventure. In the group, Mieu is the keeper of the Sorcerer's Ring, an ancient fonic device allowing him to communicate in human speech and use supportive abilities boosted by it, such as breathing fire, becoming a small tackling rampart impervious to harm, and flight.

Mieu was the cause of the fire that burned down the forest north of the Cheagle Woods, angering the ligers that lived there. Normally, young cheagles do not have the ability to fully breathe fire, but Mieu, having recently discovered his ability, learned he had an unusually great capability for it, but was unable to control it during an exercise. As a result of destroying their hunting grounds and home environment, the ligers moved into the Cheagle Woods, and forced the cheagles to supply them with food or be hunted themselves. In order to meet these demands, the cheagles stole from the people of Engeve. Mieu accompanies Luke fon Fabre, Tear Grants, and Ion to serve as a translator, so that they may negotiate with the Liger Queen. Afterward, Mieu is exiled from the tribe to serve Luke for a full cycle of the seasons.

Mieu is one of the most optimistic characters in the party. He is very curious about the world outside Cheagle Woods, often squealing in excitement as he wonders what are the objects new to him. After he was shielded by Luke, Mieu is very grateful and helps Luke a lot, though Luke is annoyed by his voice. Even with Luke's constant abuse on Mieu before Luke's resolve to change in Yulia City, Mieu still remains loyal to Luke, and he tries to raise Luke's spirit when he is feeling down. 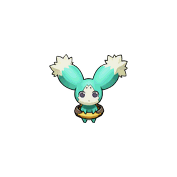 Sprite in Tales of the World: Tactics Union. 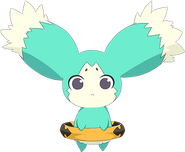 Cut-in image for Tales of Crestoria.