Moses Sandor (モーゼス・シャンドル, Moozesu Shandoru?) is one of the main characters of Tales of Legendia.

Moses met a Grand Galf when he was young. He tried to befriend it, but it always ran from him, sometimes causing great inconveniences for Moses. One day the Grand Galf was attacked by monsters and Moses came to lend a hand, telling the galf to run away and injuring his left eye in the process. With his eyesight impaired, Moses was unable to aim and fight efficiently, and without any interference, Moses would have died. However, the Grand Galf came back and rescued the young and injured Moses.

The Grand Galf took the unconscious bandit back to the camp where Moses originated from, and, for three days and three nights, the Galf sat loyally beside the hut where Moses lay, waiting for him to recover. After recovering, Moses sees the Galf's loyalty and decides to take him in as his companion, naming him Giet. The elders, however, were very cautious around the Grand Galf, giving Moses an ultimatum to force Giet to leave, with or without Moses at his side. Without hesitation, Moses left the village with Giet, along with his loyal subordinates, to go to the Legacy.

Moses makes his first appearance in the by kidnapping Shirley Fennes while both Senel Coolidge and Walter Delques are distracted with fighting each other. He takes Shirley to his hideout, the Bandits' Lair, as he believes that Shirley, as the Merines, can grant him Sacred Eres. Senel and the others confront Moses in his hideout, but their attempt to retrieve Shirley is interrupted by a sudden raid performed by Melanie, one of the three "Terrors" who serve Vaclav Bolud. Moses redirects his focus to attempt to repel Melanie's forces, but she proves to be too much for him, and he retreats into hiding, vowing that he will pay them back. Moses and his fellow bandits appear again when Senel's group is preparing to ambush Vaclav's forces in order to retrieve Shirley and Fenimore Xelhes at the Ruins of Frozen Light, but the appearance of the bandits unknowingly ruins Jay's plan to save Shirley.

Deep in the Waterways, Moses confronts the party once more, and upon learning that Shirley is Senel's younger sister, Moses has a change of heart and decides to assist Senel with rescuing his sister. Moses joins the party at this point, claiming it is to get even with Vaclav. Moses goes with the party to the Ruins of Frozen Light, but they are forced to go to the Great Hollow in order to get into the ruins. At the Great Hallow, Moses disturbs a resting Grand Gaet and causes it to attack the party. After defeating the monster, Moses goes with the rest of the party in the submarine crafted by the Oresoren to sneak into the ruins.

Eventually, they find Shirley and her sister Stella Telmes in the containment chamber. They are interrupted in their attempt to rescue Shirley by Vaclav, and they are quickly defeated by him in battle. The party quickly escapes to the Forest of No Return, and upon finding another of Moses's lairs, the bandits' camp deep within the forest, they find out that Cashel attacked the Bandit's Camp and killed his friends. This enrages Moses to recklessly attack Cashel, but Senel and Will Raynard manage to hold him back and they able to escape from the camp. After defeating Melanie's "Angler Whelks", Moses and the party are saved with the help of Maurits Welnes. 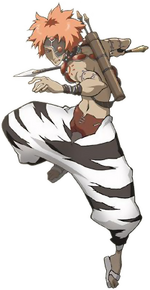 After the events in the Forest of No Return, Moses and the rest of the group go to Maurits's Hermitage. There they are told by Will and Maurits that they he, Senel, Chloe Valens, and Norma Beatty are not allowed to participate in the upcoming war due to their strong emotions. After a night of training in the spring, Moses and the others decide to put their emotions aside and do what they can for the war. During the war he is placed in the front lines and fights on field. After Jay joins the group, the party storms the Bridge of the Legacy and quickly confront Melanie, with whom Moses has an unsettled conflict. After defeating Melanie, the party confronts Cashel, who taunts Moses to attack, but Moses calmly refuses to take the bait. With the help from Jay, the party is able to corner and defeat Cashel, and with this Moses is satisfied by avenging his family. Moses extends his thanks to Jay, but he refuses such an acknowledgement, and the two enter a friendly argument which results in a beating from Will.

At the final level of the Bridge, Moses and the others witness the Nerifes Cannon being fired. After realizing that Shirley and Stella are still alive, Moses and the others battle Vaclav and finally defeat him. After being defeated, Vaclav manages to fire the cannon one more time, but Stella uses her Teriques to destroy the blast. After Stella dies, Moses is reunited with Csaba and the rest of his group of bandits.

Two weeks later, Moses and the other bandits move to Werites Beacon and begin living in the area near the lighthouse. Harriet Campbell and Senel give Moses a medal from Gadoria for helping during the war. Moses heads to the Village of the Ferines with the party to speak with Maurits. The next day Moses and the others go to Vaclav's Hidden Fortress with Walter to help find Vaclav's remaining troops, but this turns out to be a trap set by Walter in a attempt to kill them. However, this attempt is interrupted when Walter decides to leave. At the Altar of the Sea, Moses, along with everyone else, loses their eres and are about to be killed by Walter, but they are saved by the Summon Spirit Celsius.

After fleeing from the Automata, the party goes to the light house in Werites Beacon after receiving its image in their minds. There they find a elevator and it leads them to the Quiet Lands, where Moses and the party discover that their eres are working again. Without realizing that their powers only work in the Quiet Lands, Moses runs back to the front of town to face the Automata again, but he is defeated with little effort and quickly retreats to the party.

After learning the truth about the Raging Nerifes, the Quiet Nerifes bestows sacred eres on to the party and they head to Mirage Palace to reason with Shirley. After that plan fails, Moses and the others return to Werites Beacon to prepare for the final battle. When they reach the final area in the Wings of Light, Moses and the others learn that their ancestors came from another planet, and not the Ferines as previously believed. Depressed about this fact, the party wonders if they can still fight, but after seeing Senel and Shirley's courage and determination, Moses and the others fight and defeat the Raging Nerifes.

Moses's Character Quest revolves around his relationship with Giet. Months after defeating the Raging Nerifes, the Legacy experiences a sudden surge of violence among the monsters living there, this also affects Giet, who reportedly started to attack Moses's followers. At first Moses refuse to accept all the allegations, but he later falls victim to Giet himself.

After being attacked by Giet and exposing his scar to his friends, Csaba reveals to Senel and the party that they are now experiencing the time when a Galf is returning to its wild state. He points out it may be due to the power unbalance of the "beast tamer" and the "beast", or the Galf's thirst of blood. He also points out that the fate of the beast tamer is to kill or be killed by his Galf. After mustering resolve to fight Giet, Moses leaves for the Bandit's Lair to put down Giet, but upon seeing his master, Giet hurts himself in order not to fight Moses. However, with the intervention of the black mist, Giet descends further into a feral state, joining the "Dark Moses" in attacking the party and his own master.

The party later realizes that Giet's sudden change of behavior was caused by the black mist, but Moses recognizes that someday Giet will change, and he decides to leave him in the calm lands. Before bidding his partner farewell at the Quiet Lands, Moses cuts a bit of his hair and Giet's fur to make into an accessory to remind them of each other. Finally, Moses tells Giet that they will always be family, before departing with the rest of the party.

Moses Sandor hails from a clan of beast masters. He is a javelin-wielding, iron eres practitioner who is always accompanied by Giet, his pet Galf, a type of wolf-like beast. As the notorious leader of a clan of mountain bandits aboard the Legacy, Moses Sandor leads his large band of outlaws in raids across the surrounding lands. He views Giet and his outlaw followers as his own family and will lay down his life to protect each of them. At first glance he may appear barbaric, but he is actually a very kind young man who takes good care of those dear to him who happens to also be easily moved to tears. He uses his iron eres to power up his spear shots and call a rain of spears down on the stage.