Five years prior to the events of Tales of Xillia, Muzét saved an elderly woman "by a whim" during a "terrible accident", but was unable to save her daughter. Some time after the event, the woman asked Muzét to read books to her, as she was blind and accustomed to her daughter reading to her. Muzét agreed, and since then, has visited the woman and read to her. Five years later, after Ivar unknowingly activated the Lance of Kresnik, Gilandor Yul Svent used it to create a hole in the schism, from which Elympion airships and Muzét herself appeared.

At first, Muzét is caring and gentle to the party, up until Milla Maxwell's sacrifice. After the Exodus threat is neutralized, she reveals her true colors and turns on the group, saying that those who know about the schism must die. However, when confronted if that is what needs to happen, Maxwell does not respond. In her desperation to have a guide, she resolves to follow Gaius, who gives her a purpose. The two are eventually defeated, resulting in Milla becoming the new Maxwell, but not before Milla offers the devastated Muzét her hand.

Muzét has long, blue-green hair, green eyes, and pointy ears. She wears a slightly revealing blue and white outfit, as well as white gloves adorned with blue, green, and purple rings on each of her arms. She possesses intricate light-blue wings, which grant her the ability to float.

Muzét heavily depends on others' guidance; without it, she is lost and indecisive, living on the edge of despair. When Muzét initially follows Jude Mathis, she acts rather harmless and impersonal, although she relies on him. After Milla's death, Muzét drastically changes; she kills the elders of Nia Khera and attempts to kill several members of the group for the sake of her mission of "protecting Rieze Maxia".

In Tales of Xillia 2 she reverts back to the personality she originally portrayed. The only difference is that she is more independant.

Before being fought as a boss, Muzét has her own summon arte, used by Jude. Wielding one of the most unique fighting styles in the Tales series, Muzét fights with her hair in battle. Her equipped weapons are hairpins, but in actual combat she sharpens her hair into sharp points or whips it in wide swings to strike her enemies. Some of her artes even finish with blasts of energy or laying explosive traps to keep the enemy off balance. Like Milla, she is a master of casting various elemental spirit artes and can cast them in mid-air, in addition to healing and resurrecting fallen allies. Muzét's characteristic skill is "Emergency Warp", in which she instantly warps during a front-step or back-step after being attacked by an enemy. She is invincible during the warping animation, allowing her to dodge any other attacks that might come her way. Her partner characteristic skill is "Support Warp". If Muzét is the secondary partner, she warps the linked ally toward the enemy during a front-step or further away during a back-step, which makes her an excellent partner for hit-and-run tactics. In addition, this partner skill allows you to safely phase through monsters, making it valuable in battles with high enemy volume. Despite her various strong points, Muzét suffers from having the lowest defense in Tales of Xillia 2, and is even more fragile than Rowen and Elize when it comes to taking hits.

In Tales of Crestoria, Muzét appears as a spirit residing in a forest near Palumi Village, said to grant any wish. She is visited by Luke fon Fabre and Alisha Diphda, who wish to speak with the recently massacred citizens of Southvein. Muzét obliges, and the townsfolk are "resurrected", but seemingly under a feral rage. Before they can harm another village, Luke apologizes to the Southveiners for his involvement in the massacre.

Cut-in image for Malign Gravity in Tales of Xillia 2. 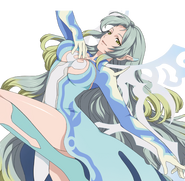