Nan (ナン?) is a member of the Hunting Blades guild in Tales of Vesperia. She holds a personal grudge against all monsters after she witnessed her parents' death by monsters when she was young.

Nan is mentioned by Karol Capel in Halure prior to meeting the party in person. The first encounter with Nan is in Caer Bocram, and it is at this time she fires Karol from the Hunting Blades. She is later seen inside the base when Gusios is released by Judith, following her sabotage of the barrier blastia. Nan later appears with the Hunting Blades in numerous places, including when they attack Belius at Nordopolica. She, alongside Tison, fight the party at Mt. Temza when Yuri Lowell and his group find Judith and later protect Ba'ul from the Hunting Blades. They retreat once defeated, later appearing when the group is attempting to convert the Entelexeia Gusios into a Spirit in order to fight the Adephagos. Nan is injured greatly and cared for by the group before they proceed to aid Tison and Clint against the out of control Gusios. Nan thanks the group before leaving with the other Hunting Blades.

Back in Keiv Moc, while Clint and Tison go off to fight a monster, Nan and the Hunting Blades are ambushed and overwhelmed by a Trifid. Karol rushes in and defeats the plant monster with a single Punishing Smash. Nan is shocked by Karol's sudden display of strength, but she gives him an accessory she crafted using the golden tusks of a monster she killed recently before heading out, promising to get stronger.

Nan can be fought in the Nordopolica colosseum. During Karol's single melee mode, Karol asks why they need to fight. Nan says she is doing it for herself. She is fought a second time as Karol's rival in 100-Man Melee. Karol, startled by her reappearance, asks why she has to fight him to prove herself, Nan, backed in a corner, says that she likes strong men. While this proves that she at least acknowledges his feelings, this sudden response only confuses him more.

Nan wields a giant, curved blade shaped like a chakram with a handle on each side. She can throw this weapon like a boomerang, with it coming back to her after she throws it. In English localization, four of her artes' names are "raptor" themed. 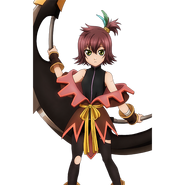