Natalia is initially bossy to the entire party, even forcing Luke fon Fabre to let her join him on their trip to Akzeriuth by blackmailing him. Throughout the party's time in the Abandoned Factory, Natalia is rather haughty to the party and a constant annoyance, even taking over Luke's position as leader of the group. Her attitude only truly changes when Tear Grants saves her from being crushed beneath a monster.

Later in the story, Natalia is shocked to find that Asch is her true fiance, and that the Luke she had known for the last several years is his replica. Despite Asch's claims of not being the same person he once was, Natalia claims she still loves him. These feelings are not unrequited, as Asch shows he still cares for Natalia on multiple occasions. It is at this point that Natalia becomes heavily dependent on Asch's support, causing future problems for the party later.

When the party arrives in Chesedonia in their attempt to end war between Malkuth and Kimlasca, Grand Maestro Mohs reveals to Natalia that she is not truly of noble blood. In fact, her wet nurse claims the true princess was stillborn and wet nurse's daughter had Natalia a few days earlier. She then took her own granddaughter to replace the princess. Natalia is taken aback by the accusations and remains affected by them for a large portion of the story. When the party returns to Baticul to confront King Ingobert VI, she and Luke are declared impostors to the throne, as she is not of royal blood and Luke is a replica.

King Ingobert sentences the two to death, intending to wage war against Malkuth once more. However, the two are saved by the rest of the party and escape with the help of Asch, Pere, the "White Knights", the Dark Wings, and Baticul's civilians. The civilians claim they do not care if Natalia is not of royal blood and that she is their princess because of the kind things she has done for them. The group later returns to Baticul, and convince Ingobert to accept Natalia as his daughter, commenting that being related by years of memories is more important than being related by blood.

It is later revealed that Natalia's real mother was a woman named Sylvia Oakland and her father is Badaq Oakland, also known as God-General Largo the Black Lion. The name given to her by her true parents was Meryl Oakland (メリル・オークランド, Meriru Ookurando?), though she continues to go by "Natalia". After discovering this revelation, Natalia goes into denial and goes to confront Largo. Largo states that both his wife and daughter died years ago, indicating he no longer thinks of Natalia as his daughter. The second time the party visits the Absorption Gate, Largo is waiting for them, and they battle. Natalia delivers the finishing blow to Largo, finally acknowledging him as her father.

Asch's death prompts Natalia to stop relying solely on the strength and words of others. When Luke tells the party that Asch has died, Natalia is broken and becomes unstable, and the group is nearly killed by Sync's trap as a result. Jade Curtiss helps Natalia finally realize how dependent she has been on Asch, and Natalia then apologizes to the party for her actions that nearly killed them. Natalia becomes able to overcome her shock of Asch's death, marking the end of her over-reliance on others. From this moment forward, Natalia no longer sees Luke and Asch as the same person, finally understanding they are two different people. She realizes that her promises made to Asch are no longer valid, that it is time to let them go, and that she must now move on with her life.

Natalia dresses in a sophisticated manner, demonstrating her grace and refinement. While in the castle, she wears an aqua blue dress and is adorned with fine jewelry. Outside the castle, Natalia dons an adventure-style outfit consisting of a blue and white top with loose, white sleeves that trail down into matching white gloves and blue bandannas around her wrists. The collar of her top is ruffled and fitted around her neck with an orange bandanna. She wears thigh-high white boots that extend down to brown, heeled boots. She has golden hair, which she keeps in place with a simple, brown headband, and carries a quiver for her arrows around her torso. During the epilogue, she wears a long, sky-blue and white dress. She wears white shoes and a black fabric on the remainder of her legs. She also wears a white headband on her head, as well as an orange choker.

Natalia maintains a calm and mature attitude, which stems from her royal upbringing. Although she may seem demanding and somewhat harsh, she cares deeply for her kingdom and its people, and is strongly devoted to them. Her promise with Asch to change her country so that "no one has to be poor" and that "war never happens" is just one example of her love for Kimlasca. She is sometimes among her people as well, rather than just hearing about them from the castle, and it is obvious the people of Kimlasca love her dearly in return.

When Natalia and Luke are declared impostors and sentenced to death, the civilians aid their escape by standing in the way of their pursuers, risking their lives in the process. To the people of Baticul, all that matters is that their princess, royal blood or not, is safe because of things she has done for them. She is a strong leader and passionate humanitarian. After the events of the Absorption Gate, she travels Auldrant to ensure that peace is kept between Malkuth and Kimlasca, as well as to help cities in need.

As a child, she had strong feelings for Asch and when he was replaced by Luke, she still retained those feelings believing Luke to be Asch. Even after realizing Luke was a clone, she still had a tough time seeing the two as separate people though she claimed she still loved Asch, which is implied to be reciprocated and she grows dependent on him for support. However, as the story continues and Asch dies, she grows to see Asch and Luke are independent people and decides she needed to move forward and make progress on her own, though it is implied she still retains her strong feelings for Asch.

Natalia is a Seventh Fonist and archer who trained at the Lanvaldear School of Archery, providing her with the skills to attack targets from a safe range. As a Seventh Fonist, she can heal and support her allies with spells similar to the abilities of Tear. Unlike Tear, however, Natalia focuses on single-target healing with artes like Heal and Cure, as well as Revive being a similar counterpart to Tear's Resurrection. This makes her spells more potent and effective for individual allies. The only way she can provide area-based healing is through the use of the FOF Changes Healing Wind and Angel's Breath from the original artes Heal and Revive, respectively. She is also the only character who can learn Recover, allowing her to purge ailments without the use of an item or FOF Change.

Also, unlike other spellcasters, none of Natalia's fonic artes can be used offensively to damage enemies. Her spells primarily consist of support abilities that increase the statistics of her allies, such as Sharpness and Barrier. She also possesses unique, defense-altering artes that can affect an ally, Resist, or enemy, Scare Shot. Natalia is very capable at supporting a close-ranged ally. She can create arte chains that cause enemies to stagger and is able to hit several enemies at a time, all while maintaining a careful distance. Her arcane artes, Star Stroke, Star Embrace, and Gallant Barrage, all fire multiple arrows for an effective amount of damage. She also has the arte Cavalry, which prevents staggering for a short period, generally enough time for her to cast a spell without being interrupted.

When Chloe sees a pair of men fighting of a group of enforcers, she concludes that they are transgressors trying to escape and attacks them in an attempt to prevent them from hurting innocent people. Natalia and Guy stop the commotion and apologize on Chloe's behalf. The men introduce themselves as Kanata Hjuger and Vicious the Great Transgressor, and assure the trio that they have no intention of hurting people.

Much to Chloe's distaste, Natalia and Guy tell the transgressors that a nearby river is overflowing its banks and that the unnatural rain in the area has been continuing for a long time. The villagers have been working to temporarily reduce the damage, but they do not have long. Natalia, Guy, and Chloe were all on their way to investigate the cause of the rain.

Kanata and Vicious agree to help and follow the three into a cave enshrined to the village's guardian deity. They meet a few villagers already on guard duty. Monsters and animals infest the cave, which the villagers explain that they were supposed to clear out. When they get to the shrine of the guardian spirit, they discover that the shrine's stone had broken.

The group head back to the village and visit the boy who was last on guard duty before the disasters happened. The boy explains that he killed a unique animal in there. One of the angry villagers concludes that the animal was connected to the guardian deity. Even though Natalia and Kanata do their best to defend the village boy, the angry villager complains that the disasters flooded his house and washed away his father. He displays the conversion with his vision orb in an attempt to condemn the boy, which Natalia tries to counter by broadcasting herself and explaining that the boy was only doing as he was tasked. Unfortunately, the people started demanding both the boy and Natalia to be condemned.

Angered, Vicious drops the whole situation and puts his gun on Natalia's head in front of the vision orb. He threatens both her and the watchers, drawing their attention to him. Rather than continue their deliberations, the people opt to send enforcers after him. Natalia thanks Vicious for saving her and the boy, and Vicious and Kanata proceed to escape and lure the enforcers away from the townspeople. 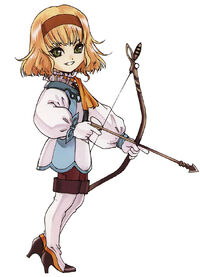