Norma Beatty (ノーマ・ビアッティ, Nooma Biatti?, "Norma Biatty") is a playable character from Tales of Legendia. She is renowned as a world-class treasure hunter.

When Norma was young, she lived on the Mainland and learned from her teacher, Sven. Sometime later Sven discovered Norma's ability as an eren and so enrolled her in an expensive school. Norma was more serious and often did not believe in what her teacher said. Eventually Sven left in search of the Everlight and did not return, sometime later she found out the news Sven was found dead on the Legacy. This caused Norma to leave her home and runaway to the Legacy to find the Everlight and complete her teacher's work.

Norma's first appearance in the game is when Senel Coolidge, Chloe Valens, and Will Raynard go to the Crystal Forest. The party first meets Norma when a "Crystarantula" is chasing her after sneaking into its nest. Chloe sees that Norma is in trouble tells the party to follow her in a attempt to help her. When the party gets to the halfway area they find Norma still being chased by the "Crystarantula", but Norma manages to make the monster attack the party instead of her. After defeating the monster Norma introduces herself and decides to follow the party. When the party reaches the exit they seem to have their path blocked by wall, but Norma goes up to the wall to cast Grave and makes a passage for them. After the party continues further until they reached the forest's exit. Outside the forest she finds Shirley Fennes's brooch and takes interest in it after.

After Norma goes with them to the Secret Passage and helps them enter the area by the use of eres. After the party saves Shirley from the mysterious man, Norma attempts to buy the brooch from Shirley a couple of times, but it Shirley tells her no, making Norma angry. After defeating the "Dinoworm", Norma is left alone, while Senel and Shirley abandon the party. Norma heads back to the Werites Beacon with Will and Chloe.

When Senel returns to Werites Beacon with Harriet Campbell, Norma is found eavesdropping on the conversation Will and Chloe have with Senel. Norma decides she is willing to help out Senel as long if she can get a look at Shirley's brooch, which she believes is a piece of the Everlight. Norma and Senel then head to Port-on-Rage to get a boat and follow Will and Chloe to The Crags. After obtaining a boat and arriving at the Crags, Norma and the others meet Poppo and take him back to his village. After Senel makes peace with Will and Chloe, Norma and the others continue their attempts to save Shirley with the help of Jay. 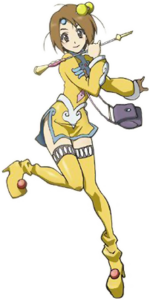 Norma goes with the party to the Ruins of Frozen Light, but they are forced to go to the Great Hollow though in order to get into the ruins. After using the "Poppo Mark III" to enter the ruins, Norma threatens to kill Jay for making them take long way into the ruins. In the ruins, they find Shirley and her sister Stella Telmes in the containment chamber. Vaclav Bolud interrupts them in their attempt to rescue Shirley and he defeats them in battle. After Norma with the rest of the party escape to the Forest of No Return with the help of the "Golden Teriques". At the Bandit's Camp in the forest, Norma tries to hold back Chloe from fighting Stingle in battle, but she manages to escape in time with the others. After defeating Melanie's "Angler Whelks", Norma and the party are saved with the help of Maurits Welnes and head to his hermitage. There they are told by Will and Maurits that she, Senel, Chloe, and Moses are not allowed to be in the war due to their strong emotions and childish acts. That night when Chloe and Senel are training in the spring Norma and Moses are caught spying on the two and decide to join in. The next morning they agree to put their emotions aside and do what they can for the war.

During the war Norma with the others are placed in the front lines and fights on the main battlefield. After Jay joins the group, the party storms the Bridge, and there they confronted Melanie, Cashel, and Stingle, managing to defeat them all. At the final level of the Bridge, Norma and the others witness the Nerifes Cannon being launched. After realizing that Shirley and Stella are still alive, Norma helps in the battle with Vaclav and finally defeats him. After being defeated, Vaclav manages to fire the cannon one more time, but Stella uses her Teriques to destroy the blast. When Senel and Shirley use the brooch to revive Stella, Norma begins to think that it might in fact be the Everlight, but due to the fact that stone breaks and Stella still dies causes Norma to believe that the stone was just a dud.

Two weeks later, Norma returns to Werites Beacon after searching for the Everlight and tries to live in the local inn. Harriet and Senel give Norma a medal from Gadoria for helping during the war. Norma heads to the Village of the Ferines with the party to speak with Maurits. The next day Norma and the others go to Vaclav's Hidden Fortress with Walter Delques to help find Vaclav's remaining troops, but this turns out to be a trap set by Walter in a attempt to kill them, but it is interrupted when Walter decides to leave. At the Altar of the Sea, Norma and the others arrive and find out that Fenimore Xelhes is dead. Shirley as the Merines takes away Norma's crystal eres along with everyone and are about to be killed by Walter, but they're saved by the Summon Spirit Celsius. At the entrance to the altar, they are attacked by the Automata and are forced to return to Werites Beacon.

After fleeing from the Automata, the party goes to the lighthouse in Werites Beacon after receiving its image in their minds. There they find a elevator and it leads them to the Quiet Lands, Norma and the party find out that their eres are working again. During their third day in the Quiet Lands, Norma and Grune form the Laugh Brigade to cheer up the party and it does not work, but Will thanks her for trying to cheer them up. After learning the truth, the Quiet Nerifes bestows sacred eres on to the party and they head to Mirage Palace to reason with Shirley. After that plan fails Norma decides to head back to Werites Beacon to have a party to prepare for the final battle. The next day the party goes to Wings of Light and defeat Walter, Maurits, and eventually defeat of the Raging Nerifes. After defeating the Nerifes, the party gazes at the sea and Grune tells Norma the name of the planet they live on, Shining Blue. During the ending credits Norma is seen holding tangled up in vines in the Crystal Forest while searching for the Everlight.

Norma's Character Quest revolves around her finding the Everlight and proving to Zamaran that Sven was right. On the first day, she takes the party to the Man Eating Ruins to see if the treasure is there. The next day, Norma sends the party to the Ice Monument. That night, Norma runs to the cemetery to visit Sven's grave and falls unconscious. The next day, she tells the party she has given up searching for the Everlight, which causes Zamaran to mock her. After Norma runs out of town toward Crystal Forest, Zamaran reveals his reason for coming to the Legacy was to save Norma from the same fate Sven and he suffered.

At Crystal Forest, Norma arrives at a dead end in the forest, but she figures out that is a hidden passage and casts Grave on the wall, revealing a hidden chamber. When party journeys into the Catacombs, they find Norma on the floor and on the verge of death, so they give her the antidote, which heals her completely. Norma begins to doubt herself again and summons "Dark Norma" to fight the party. After defeating the dark character, Norma solves the trials of the Everlight and goes into its resting place. In the Everlight's resting place, Norma finds numerous messages left by Sven, revealing he found the Everlight. Norma decides to take Zamaran to the Everlight and heals his eyes, allowing him to see again. After the Everlight collapses and shatters, Norma grabs a final shard of it at the last moment and keeps it.

Cheerful and comical, Norma banters with those around her and occasionally pokes fun at herself in order to get a good laugh. She is also the butt of a running joke where she falls asleep at the most bizarre of times. Despite her silly side, she makes deeply profound and insightful remarks. She is possibly the most talkative character and appears in most of the skits that can be activated during gameplay. Norma also wants a "Hot Bod" as shown during a Character Quest interlude and a skit and envies Chloe and Grune for it. Norma also has a bad habit of spying on people whenever something interesting is going on, though she is always caught.

As a child Norma was much more serious and not at all cheery, often saying blunt, sarcastic and sometimes even rude things to Sven and not smiling as often. In other words, her personality was completely opposite to how she is during the storyline. This is the result of her home life, as it is shown that her parents do not pay attention to her, sometimes arguing so much that she became frustrated with her family. When Sven took her in, his personality started rubbing off on her, resulting in Norma becoming much happier, taking on Sven's humor as her own.

Norma equips straws as her weapons and her physical attacks are blowing bubbles out of a straw. As a crystal eren, Norma is akin to a spellcaster, but has a lower intelligence statistic than either Will or Grune, and she begins with a comparatively limited number of spells. She does, however, learn several powerful and useful spells as she levels up, including Thunder Arrow, the first mid-tier crystal eres learned by any playable character. As the game progresses, Norma becomes a versatile spellcaster able to heal, buff, debuff, attack with all six of the game's elements, and is one of two characters, the other being Shirley, to learn the game's single non-elemental spell, Tractor Beam. One of Norma's headgears, the "Angel Halo", greatly augments her low Intelligence.

Norma is a recruitable character in Tales of the World: Radiant Mythology 3 through Senel's personal quest in Brownie Mines. She is located at the sixth layer, where she is seen searching for treasure. Meeting her, Senel drags her out of Brownie Mines to let her be a recruit for Ad Libitum. Like the other characters from Tales of Legendia, Norma is given her own mystic arte.

The two reach the caved-in Pasedy Mine, where they meet Velvet Crowe and Laphicet, who are looking for another way in. They help the two find another entrance to the cave, where Velvet senses the presence of an incarnation. Norma's "treasure sense" detects a gem around the incarnation's neck. Then, the incarnation starts crashing into the walls, causing the cave to quake, giving it a chance to escape. But before it leaves the cave, Norma notices it drop an item. The group follows the incarnation outside the mine.